Hey everybody, it’s an advance review! 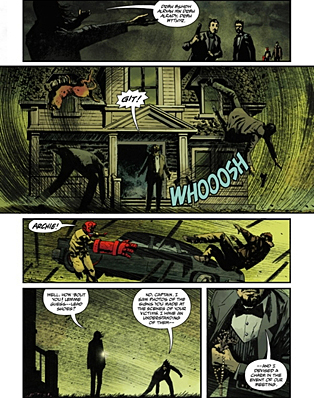 In the last issue of B.P.R.D.: Hell on Earth, a blackout at the B.P.R.D. headquarters occurred while Professor J.H. O’Donnell was converting a 1949 case file to a digital voice recording and caused a panic that led to a ghastly evil possessing Professor Kate Corrigan. The entity was enigmatically related to the case Professor O’Donnell was transferring – an old case of B.P.R.D. founder, Professor Bruttenholm! B.P.R.D. #121 picks up right where that issue left off and concludes the two part arc, “The Devil’s Wings.”

Liz Sherman just got back from duking it out with the resurrected Black Flame and all she wants to do is have a cigarette. Panya stops her, though. The ancient mummy is concerned as she feels that something is wrong, a suspicion later confirmed by the B.P.R.D.’s newest psychic, Fenix Espejo. The action in this issue flashes from the present to the past, when Professor Bruttenholm, two B.P.R.D. agents and a very young Hellboy pay a visit to a decidedly satanic Air Force veteran/necromancer.

Coming off “Reign of the Black Flame,” one would think the current two-parter, “The Devil’s Wings,” would be more quiet than it is. Sure, it’s confined to the B.P.R.D. base and there aren’t tentacle monsters tearing up the streets, but this story sheds light on a pivotal moment in Hellboy’s life.

The flashback is handled perfectly. It feels like an action scene at first, as the necromancer/former pilot tosses the B.P.R.D. agents off with a spell. Professor Broom stood his ground, though – he paid attention to the sigils this bastard left at a string of ritualistic murders. Unfortunately, Broom didn’t count on the necromancer performing another ritual shortly before the team arrived. That’s when a wet-behind-the-ears Hellboy gets involved and takes him on a path that will most likely lead to this December’s Hellboy and the B.P.R.D. series.

The story in the present follows as Liz, Panya and company realize that Kate’s possession is connected to the 1949 case. Campbell’s art here is big when it needs to be, like when the possessed Kate takes out a helicopter, but it’s quiet when it needs to be as well. There is a stillness at the end of the 1949 flashback that resonates and quietly hints at Hellboy’s future. There’s a scene where Liz, Panya and Fenix are discussing Kate. Liz doesn’t seem to see anything. She’s seen a lot, that Liz Sherman, and she just went full Human Torch on the Black Flame a few issues ago – she can be forgiven if her ghost-of-a-necromancer-possessing-your-boss meter is a little off.

B.P.R.D.: Hell on Earth #121 is a helluva horror comic. It’s got possession, hellfire and the young Beast of the Apocalypse taking a major step towards his destiny. Mignola, Arcudi and Campbell conclude a tale in this issue that connects recent Hellboy solo stories like The Midnight Circus and Hellboy in Hell with the B.P.R.D. Both books have felt separate, not just in terms of story, but tonally as well. Recently, Hellboy has been all about abstract horror while B.P.R.D. is more about in-your-face monster fighting. This two-part arc seems to sow seeds that could bring the two books back together. Until then, this is another great issue of the long-running horror series and I can’t wait for #122. 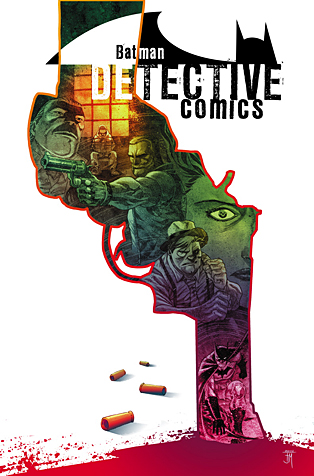 I read this issue twice in two days, which is definitely not my M.O. I read most of my comics twice, but I like to re-read a previous month’s issue as a refresher just before a current month’s issue. Detective Comics #33 seemed to move too quickly at first reading, leaving me thinking I must have missed something. A second go-round, however, made me realize this was due to Brian Buccellato’s and Francis Manapul’s seamless pacing and my own anticipation for next issue’s conclusion to the “Icarus” arc.

Initially, I was most excited to see Harvey Bullock develop, as we’ve only gotten a glimpse into his past after almost three years of the New 52. We’ve seen the big guy flirt with anything on two legs before, seen him throw his weight around (figuratively and literally). We’ve seen him show his smarts as a detective and heard rumors of his shady past. Something feels a little off this issue, though, and Bullock comes across as one-dimensional. Buccellato and Manapul have delivered fairly solid cliffhangers on their Detective run, but the Batman/Bullock slugfest ending this issue comes across as a bit silly without intending to be so.

Complaints aside, our story plugs along and an end is in sight. The Squid’s crew might be done in Gotham. We get to know Annie Aguila more and she’s turning into a regular dope user. The Kings of the Sun make a power play, trying to pull Annie into their fold. And the Icarus drug claims another victim.

Buccellato and Manapul bring some fresh design touches to the Detective title, something I haven’t seen much in Batman books outside their brief run. They’re fans of the double-page layout, using it several times this issue. Their colors and shades, also not used widely in the greater Bat-universe, are crisper this issue, not seeming like they could wash over the lines.

I don’t know what’s next for Detective Comics, but I’m sure it will involve the “will we get a new Robin?” subplot, as that is where DC seems to be focusing. I’m confident that Buccellato and Manapul, should they continue on the title, will deliver, but here’s to wishing they could have a stand-alone Batman book. 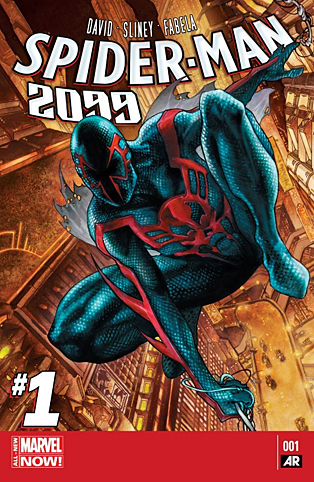 In 1992, Marvel launched a bunch of titles set over a hundred years in the future. Spider-Man, the X-Men, Ghost-Rider, the Fantastic Four, Hulk, the Punisher and even Dr. Doom got their futuristic titles. For the most part, these characters were divorced from the modern version (except for Doom), with a tenuous connection to the past incarnation. I pretty much gave all of them a shot, with the exception of Stan Lee’s ridiculous Ravage 2099 comic.

At the end of the day, Spider-Man 2099 was the best of these, and a lot of the credit for that goes to the writing from co-creator Peter David. The title was both grim n’ gritty (it was the ’90s) and humorous in that traditional David style. When Dan Slott brought future Spidey Miguel O’Hara back from 2099 to 2014 in Superior Spider-Man #17, I thought it was a fun fan service stunt. So what a surprise it is to be reading a new series about the displaced web-slinger, with Peter David back on board as the writer.

Spider-Man 2099 #1 is a solid introduction, setting up what this series has to offer. While the Spider-Man 2099 stories from over 20 years ago were doing a lot of world building and table setting, this series makes the smart move of putting the main character in 2014. We’re able to get to know Miguel O’Hara as a person now, while also being introduced to elements from the future in smaller doses. One thing I remember about the original series and many of the other 2099 titles is that there was too much that needed to be explained. You not only had to be invested in the characters but also in the cyberpunk dystopian world of 2099. Not only that but it was the early ’90s, and everything was extreme, with most of the characters acting as anti-heroes who killed for the heck of it. It didn’t make for the most compelling ongoing read since every other comic company was doing it as well. Hilariously, it works great now because Miguel O’Hara is an out-of-time character on multiple fronts: a fictional character from a fictional future, who is the product of the marketing demands of a very real past in our reality.

This issue is pretty straightforward. Miguel O’Hara moves into a shitty New York apartment and has a job as an assistant to his jerk grandfather Tiberius Stone at fledgling new company Alchemax, the corporation that runs Nuevo York in 2099. His mission is to keep an eye on his grandfather and prevent his untimely death, which may or may not occur due to a temporal distortion. Miguel must also contend with a Terminator-like assassin sent from 2211 who was sent to kill him.

Peter David doesn’t let the time travel and paradox stuff bog the story down, and he keeps things humorous while also action and character based. Miguel’s interactions with his landlady, his super, his holographic assistant from the future, Lyla, and his coworkers are great, and there’s definitely a JLU/Booster Gold vibe at times. Even the robo-suited assassin sent from the future by the mysterious organization T.O.T.E.M. has some great dialogue, especially when he has to determine via his database if the people he’s about to kill have any impact on the future, which is about as far into time travel details as David goes in this issue.

Will Sliney’s linework is clean and his characters are very expressive facially, much like Kevin Maguire’s work on the Justice League comics. Occasionally, the backgrounds suffer from this, but overall the artwork is great. There are some nice visual details that are preserved from the original series, like Miguel O’Hara always having to wear sunglasses during the day because of his spider mutation. His amusing visual annoyance at Lyla popping up from his wristwatch device to assist him at awkward times is also entertaining, bringing to mind the antics of Booster Gold and Skeets.

This is a fun comic that is a welcome reintroduction to a character who has been a victim of time, both on the page and off. It’s great that Peter David has the chance to give it another go, as there are many paths this storyline can take and fun things that can be done with a character from 2099 in the present. The Spider-Man of 2099, free of his time period and the demands of being grim n’ gritty, is now finally able to forge his own destiny for old and new fans alike. 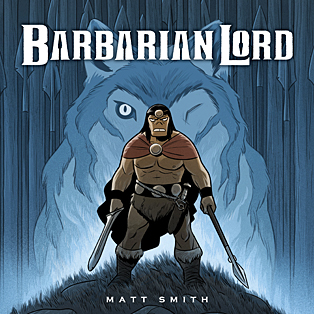 There stands the man himself, clad in cloak and furs, sword and spear in hand, the swarthy neanderthalness of Frank Frazetta’s Conan rendered in the minimal cartoon linework of Jeff Smith. Behind the warrior looms a spectral, one-eyed wolf. The background is a forest of spears.

If you judge Barbarian Lord, by Matt Smith (no relation to the aforementioned Jeff Smith or the Doctor Who actor), by its cover, you might have a good idea of what awaits you in its pages: pulp fantasy pastiche, a mix of wry humor (my God, that He-Man gag) and serious storytelling, and a heaping dose of graphic beauty. Over it all, you can practically hear Basil Poledouris’ “Anvil of Crom” from Conan the Barbarian playing.

Smith has an apparent love for the Icelandic Sagas – the first page of the book bears the kenning (a poetic, standardized circumlocution) ‘Feeder of Ravens,’ which is an evocative indication of the book’s interests as well as a dab bit of foreshadowing. Indeed, Barbarian Lord himself is as obsessed with poetry as he is with splitting skulls, which gives Smith the chance to use some wonderfully skaldic language.

Smith’s art is no less fantastic. His lines are elegant and full of motion, while the gray-tone color scheme keeps things crisp. The eight-page battle between Barbarian Lord and a sea serpent is one of the most exciting things I have seen on a comic page so far this year.

While all that is true, the real joy of Barbarian Lord is something a little harder to put your finger on. Barbarian Lord is one of those once rare but increasingly available comic book experiences that could only ever work as a comic. Where else could you mix these parts into a sum that is not only exciting and funny, buy also beautiful and mysterious? Another welcome entry into an ongoing comic book renaissance.

Let’s Play at the Movies