The first thing I’ve done with every Android device I’ve bought is root it. It’s my nature. Whenever there’s a software exploit that will let me run whatever I want on a device, I want in. Custom firmware for my PS3 and PSP. The Twilight Princess hack for the Wii. And, naturally, rooting Android. Rooting my phone allowed me to use it as a portable hotspot before Verizon offered that option. It allowed me to easily migrate data from one device to another. It turned my original Nook Color into a full-featured Android tablet. And, most importantly, rooting has given me the ability to upgrade to newer versions of Android before Verizon and HTC or Samsung have pushed updated software. But rooting is something a very small percentage of Android users actually do. Most of them are perfectly happy running the software that comes with their phone. So what if I decided to see how the other half lives?

Motorola offered a promotion recently where you could try out their Moto X for a penny, and return it within two weeks. Needless to say, they ran out of codes within three hours. But a kind soul took pity on me and gave me one of his extras. So, after 10 days and a penny, I had a brand new custom Moto X in blue and white.

Day 1: FedEx delivered my phone and I called Verizon. After 10 minutes the Moto X was active and my Galaxy S4 was off. I set up WiFi and proceeded to download all my apps. This part took a long time, but with about 100 apps that’s to be expected. I made sure not to install any apps that required root and let it finish. Which is when I hit the first obstacle that rooting eliminated: having to log back in to everything! Facebook, Twitter, Instagram, both Google accounts, Verizon, WiFi, etc. – a lot of which would’ve been backed up by Titanium Backup. Since I don’t use the same password for every app (neither should you, by the way), this was a bit of a pain. But overall, the first thing that I noticed was how Motorola did very little to Android apart from adding their own apps and a few unobtrusive hooks into the OS for the phone’s hardware, a change of pace from what HTC and Samsung have done. 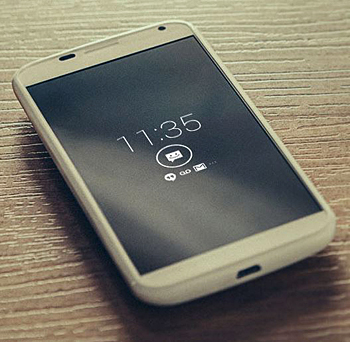 Day 2: My first full day with the phone, and for the first time, I miss a feature from CyanogenMod on my S4. In CM, holding down a volume button skips tracks. Having set my car up as a trusted Bluetooth device and thus disabling the lock screen altogether, changing tracks became a little less safe since I needed to look at the screen to find the skip button. But I get my first experience with Motorola Assist, which automatically detects that I’m driving and sets the phone to read out text messages while I’m doing so. Assist is a lot simpler to use than similar apps like Llama or Tasker, or CM’s Profiles, but it isn’t nearly as full-featured. Assist can detect when I’m driving (or, perhaps more accurately, in a moving car) and will read text messages while doing so, but it detects it largely based on my speed rather than a Bluetooth connection to my car. Assist also changes the phone based on when I’m sleeping (time-based), in a meeting (haven’t figured this out yet), or at home (location-based) and can change notifications based on that.

But most important, this is the day I come away impressed with the phone’s battery life. After 16 hours of being away from a charger, I went to bed with the battery at 64%, way higher than any smartphone I’d used to that point.

Day 3: And for the second time, I miss a feature from CM. This time, it’s the lock screen flashlight as I stumble around my bedroom in the dark. It was a lot easier to just press the S4’s home button while the screen is off, but without hardware buttons on the Moto X I’m stuck using a lock screen widget and a separate flashlight app as a workaround. And after the full day, I come away less impressed with the battery life, as I end up closing in on my usual amount of battery usage. I don’t know how my actual usage has changed, but my preferred battery monitor apps are enhanced by root access. But since I’m not anywhere close to running out of juice I’m not too worried.

Day 4-5: For the first time, I find myself more disenchanted with the phone than the lack of root. While the Moto X is a perfectly good phone, it lacks in two areas compared to my S4: camera and screen size. I’ve never been particularly enamored with phablets like the Galaxy Note series of phones, but as Android phones have gotten bigger, going backwards feels weird and unsettling. I suppose if I had gone from the Galaxy Nexus to the Moto X, I wouldn’t have had a problem, especially since the Moto X is the closest thing to a Nexus phone that Verizon has made available since. But the camera on the S4 is light-years better than what Motorola put in the Moto X. It’s at this point that I start considering returning the phone early.

Day 6: The straw that breaks the camel’s back. A feature that Google would announce the following day at its I/O Conference as a feature in Android L, heads-up notifications, has already been coded for KitKat and has made its way to the recent daily builds of CyanogenMod 11. At this point I concede that while the next generation of the Moto X could end up as my next phone (with an improved camera and a larger screen, anyway), I’m ready to go back to the S4.

Now, if someone were to give me an HTC One M8 to play with, I might change my tune. That phone looks awesome.

The App Hole: Take Me Out Of The Ballgame
Previous Post