Like Nightcrawler says at the beginning of this issue, after a death things return to normal pretty quickly. We see some insane volleyball time with Colossus in the Danger Room interrupted by a psychic message from Nightcrawler’s pirate lady friend Bloody Bess. It seems that an unknown psychic force has attacked the Crimson Pirates, and only she was able to avoid being consumed by it. Nightcrawler unconsciously teleports with some Bamfs, and wakes up in a desert. After reuniting with a battered Bess, the two of them must defend themselves against a bunch of psychically possessed pirates. 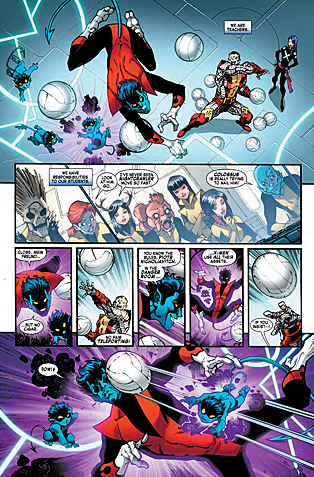 Back in Westchester, Psylocke figures out what happened, and a Blackbird full of X-Men are off to rescue Nightcrawler. What we learn as the issue unfolds is that the pretty major X-Men villain the Shadow King is behind all of this, and the X-Men are basically being lured into a trap. Also, the Bamfs teleport a Blackbird with students Ziggy and Rico in it to join the fray, most likely in the next issue. As things end we see Nightcrawler, sword in hand, facing off against a whole lot of possessed mutants, X-Men included.

While there are things that I like about where the story is going, there are also some clunky plot points that annoyed me. For starters, how is it that Bloody Bess can fend off the Shadow King’s psychic attacks and not seasoned telepaths Rachel Summers and Betsy Braddock? They’ve fought him before; I even have the Chris Claremont-written issues from back in the early ’90s where he enslaves a bunch of them on Muir Island. You’d think the X-Men would have a whole protocol when dealing with the Shadow King. Also, Nightcrawler is just immune to psychic attacks now thanks to his dying and going to the afterlife? A little bit weird.

While the idea of Nightcrawler fighting a bunch of possessed X-Men in the next issue looks like a lot of fun, this was a clumsy way of setting it up. It also leads to my other gripe with this issue about how Claremont is pushing Bloody Bess as Nightcrawler’s new love interest. While this is all well and good, I hope this doesn’t turn into another fridge moment that shows how great Kurt Wagner is at overcoming adversity, as we’ve already been through one in this series so far.

Todd Nauck does a wonderful job with the art yet again. There were many moments in this issue where I paused to admire his artwork and the superb coloring work by Rachelle Rosenberg. Wonderfully fluid fight scenes abound, and he really has a firm grasp of the character designs of the different X-Men. I love the little character detail of Kurt crossing himself before taking on the Shadow King, since despite all his bravery he’s still a scared Catholic facing down what is essentially a demon. My only problem with the art was the panel where Bess and Nightcrawler kiss. It almost doesn’t seem like it belongs there, like Nauck thought it was a nice touch, or maybe misinterpreted a script detail from Claremont. It’s just weird because Nightcrawler is somehow delivering multiple sentences of expository dialogue while kissing her. It would have made sense just to add it after the dialogue panel. It’s not a huge deal, just a noticeable blemish.

After some wonderfully sentimental and stirring issues, this was a weird way to bounce back into the action. Maybe there were production issues, who knows. I’m hoping that this storyline is wrapped up quickly and we can focus on smaller-scale stories featuring Nightcrawler and maybe one or two other characters. It is Nightcrawler’s book, after all, and he can do perfectly fine on his own, with maybe about five to eight Bamfs accompanying him. 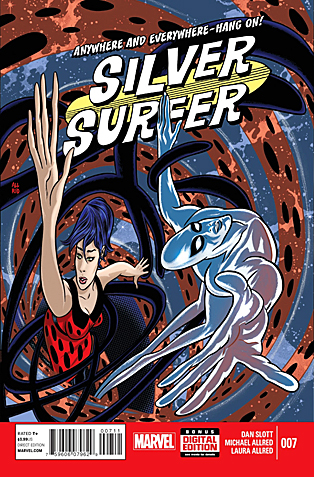 The wacky and fantastic adventures in outer space continue! The Doctor and his compa- I mean the Silver Surfer and his friend Dawn literally find themselves in a dark place in Silver Surfer #7. They decide to plunge into a dark unknown section of space, and what they ultimately find is a lighthouse. While it initially seems harmless it quickly turns into a nightmare scenario, as the darkness turns out to be a living thing that consumes Dawn.

This is where the meat and potatoes of the issue comes into focus, as the Surfer panics and searches the vast darkness for his missing friend. His concern is so great that he even splits up from his board to cover more ground. As this is happening, we flash around to snippets of heretofore-unseen adventures with Dawn, the Silver Surfer and his board “Toomie” on a variety of planets and in various corners of the cosmos.

It’s a fantastically crafted self-contained story, much like the “perfect planet” story in issue six. Slott is doing a great job with keeping this series episodic, and letting the main characters be more in focus than all the aliens and potential multi-part crossovers that some other books seem to rely one. Like any good science fiction has taught us, the lasers and tech trappings are just dressing; what ultimately matters is the story being told and the characters that we’re supposed to care about. Saga is an excellent example of this.

As always, the Allreds knock it out of the park, as Michael draws some of his most insane planetary and outer space designs in this issue. It’s such a treat having him on this series because I feel like his imagination is a match for the Power Cosmic, as it seems like he tops himself with each new issue. For an example of this, see his insane maze design for the planet Tauro in this issue. Laura Allred’s colors really make everything pop, and multiple times this issue it felt like Dawn, the Surfer and “Toomie” the board were going to fly right out of the page into our world. I don’t know if I could read this without the contributions of the Allreds to Slott’s wild ideas.

By the end of the issue, we see Dawn and the Silver Surfer as Norrin Radd reunite in a floating embrace, and more exploring is done into the essence of the Surfer/Radd, and also into the essence of the relationship of the two main characters. I’ve mentioned in previous reviews how the Silver Surfer loathes the fragile creature that is under the silver, while also embracing it. His kneejerk reaction as a godlike being is to say that he’s above humanity, and especially the people of Earth. When we see him “de-silver” into Norrin Radd in a new flashback sequence in this issue, he says that he hates it, that he feels so fragile in that form. Something happens to him that proves that fragility, and he vows that he will never return to it again. We know he’s lying because he does it again to find Dawn, and that he has also been suppressing feelings for Dawn this whole time.

What is being revealed as this series progresses is that Dawn is literally and figuratively bringing out the human side of the Silver Surfer, in the hopes that he will embrace it. While fate has pushed him into the role of protector of the spaceways, there’s that side of the Silver Surfer that’s still the bald astronomer from Zenn-La. He knows that with his power he has a great responsibility to the universe, despite a part of him that wants to return to that life before Galactus. While potentially falling in love or at least caring for a human from Earth may not be the smartest idea for a godlike being, at this time he’s living in the present. Despite the infinite wonders offered by outer space, there’s always one thing that’s more wonderful.