I recently went to the loudest effing concert of my not-so-young-life, and if you’re trying to talk to me, good luck, because I can’t fucking hear you.

I’m sure many of you attend concert-slash-ritual-sacrifices on a regular basis (I am specifically thinking of Stu Horvath and Gus Mastrapa when I write this), so maybe what I’m about to describe will seem quite tame. 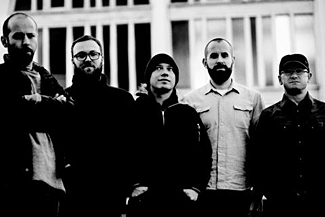 But understand that while the Rookie of the Year attends his share of loud rock shows, he ranks the Newport Folk Festival atop his list of annual musical highlights.

So when I stepped into Terminal 5 to see Mogwai two Fridays ago, I had no idea what I was getting into.

As you regular readers know, Mogwai took home my coveted 2013 Album of the Year Award for their soundtrack to a French zombie drama. It’s a quiet, understated record, and from their recent set lists, I knew they weren’t going to play any of it.

No matter. I have several of their other records, and the show opened with “Heard About You Last Night,” a softer cut off their new album, Rave Tapes, which I love. Subtle and satisfying, it chimed its way up to my awesome perch on the third floor, where I took some sweet photos and clutched my vinyl import of Les Revenants that I’d found in very limited supply at the merchandise table.

The second song of the night slowly began to shake the rafters, and I did something I don’t ever recall doing at a concert: smiling and dancing all the while, I stuck my fingers deep into my ears.

I wasn’t the only one. Several people around me were doing the same, and by a couple of songs later, each of which was more eardrum-slamming than the last, I headed toward the rooftop bar to give my tubes a break.

As I made my way upstairs, I saw event staffers fleeing as well, fingers in their ears, too.

And then came the intense, violent strobe lights. I almost expected to see someone on the floor having a fit of epilepsy.

That’s when it hit me – Mogwai was mugging us.

My ears were ringing by the time I made it to the rooftop, where the concert was blaring, albeit more softly, through the outdoor speakers. 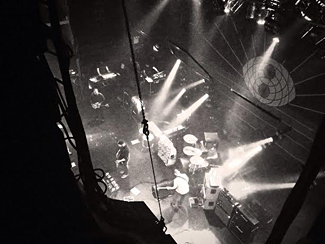 I listened to “Auto Rock” – one of their best songs – burst through the courtyard as I smiled and sipped a Guinness. I even casually thumbed through some #Mogwai tweets – Thanks to #Mogwai for contributing to my hearing loss! was a typical sentiment.

I eventually climbed down to the ground floor for the encore. It seemed quieter down there somehow, without the giant speakers hanging from the ceiling a few feet away from my earlier spot.

Either that, or I had already begun an irreversible spiral toward total deafness.

Mugwai, er, Mogwai, can really tear it up. The show was beyond intense – and if it hadn’t been so intense, it might have been one of the greatest concerts I’ve ever attended.

As it was, it was the greatest concert I’ve ever attended while in full retreat.

Stu and Gus, maybe it’s time I tag along to one of your hybrid concert/Satanic rituals.

You know, now that I won’t be able to hear any of it anyway.

Matt Marrone’s next scheduled concert is Sharon Van Etten at Bowery Ballroom. He expects his ears to be working again by then. You can follow him on Twitter @thebigm.

In Defense of the Wrong Record

Unwinnable Listens to the Best Music of 2016 – Prelude
Previous Post