I am part of the Vertigo generation. Sure, we had superhero comics and Dark Horse’s Aliens and Predator comics, but we also had Sandman, Shade the Changing Man, Black Orchid, The Invisibles and Preacher. We got one-shot comics like Kill Your Boyfriend and an epic 300-issue run of Hellblazer! Vertigo, an imprint of DC Comics, published some of the most off-kilter comics this side of Dark Horse. They were the indie comics published by a subsidiary of a subsidiary of Warner Brothers. Vertigo felt like it was sticking it to the man. Their books didn’t feel like any other books published by the “Big Two.” Vertigo Quarterly is a return to that feel. 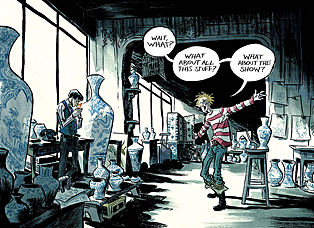 Dark Horse Presents has been keeping the anthology torch lit. However, DHP is an ongoing series, meant for both standalone short stories and for serialized fiction. Vertigo Quarterly is interesting because it riffs on a theme. Each issue will focus on one of the four colors that make up the basis for the comic book color pallet: cyan, magenta, yellow and black.

This first issue is Cyan. The color blue is used to set mood, to represent life, a state of mind more throughout the issue. In Shaun Simon and Tony Atkins’ “Serial Artist,” the color recurs as Liz’s eye color, the color of dead skin, etc. Amy Chu and Althia Martinez’s “So Blue” references one of its main characters. Fabio Moon uses it as a hue in “Breaking News of the Wonders the Future Holds.” It’s a cold winter day and these New Yorkers embrace it, even when things don’t work out for them.

Vertigo Quarterly#1: Cyan is, at its best, a meditation on the art form by some of the best creators in comics. Whether science fiction, romance, crime, horror or humor, the stories in this volume spring from all manner of genre. There is very little fat in this anthology and it feels uniquely Vertigo. 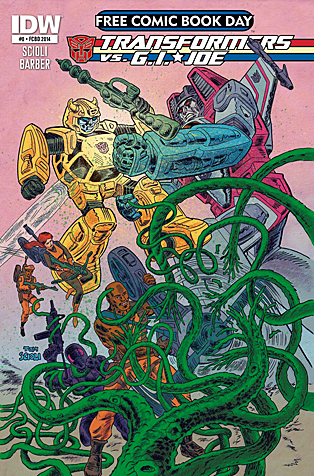 This comic is insane. Tom Scioli and John Barber take two cheesy 1980s toy properties (that, in fairness, have a surprisingly rich comic book pedigree) and turn them on each other’s heads. Transformers vs. G.I. Joe #0 is as bombastic as a Kirby comic with the flourish of a Steranko story. Tom Scioli is channeling the greats again in this book!

You may be familiar with Scioli’s work from Godland, American Barbarian and The Myth of Opus-8. If not, you need to stop reading this and go get your grubby little mitts on them.

The prose in this comic is purple, the pages are yellow and the whole thing feels like a lost issue from 1982. The pages have an artificial yellowing that, combined with “random” color splotches, compliment the art and storytelling. It’s not supposed to be the moody, stylized art we see in G.I. Joe: The Cobra Files or the hyper-detailed art of IDW’s two ongoing Transformers comics. Scioli and Barber get to cherry-pick what they like best from the 1980s Transformers and G.I. Joe cartoons and comics, fusing them into a brand new story that feels consistent with the earliest incarnations of both franchises.

Scioli takes advantage of the 0 issue format to show a G.I. Joe team that is familiar, but just a little different. Snake Eyes, for one, can talk and doesn’t have a butchered face (yet) and Major Bludd still has both eyes and arms at the outset. Duke is still a rookie with the Joe team. As for the Transformers, we only get a glimpse at their lore. Indeed, the only two characters we see in the first issue are Starscream and Bumblebee.

Transformers vs. G.I. Joe #0 was an absolute blast to read. If this book is a hint of what’s to come in two months (when #1 hits the stands), then it will stay on my pull list for a good long while. If your shop still has a copy, go snag it! 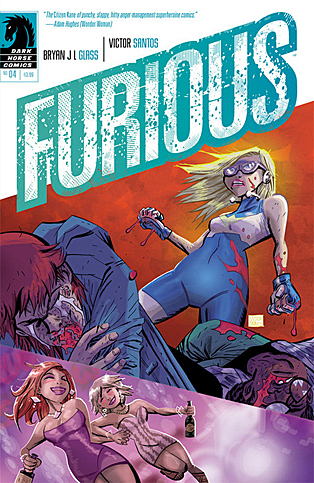 Superhero comic books are about spectacle: the bright colors, the bold lines, the strong poses and uncompromising missions. In short, comic books want us to look. Furious, by writer Bryan J. L. Glass and artist Victor Santos, wants more than that – it wants us to look at our looking.

Cadence Lark, aka the Beacon, aka Furious, is used to being looked at. She’s a former child actor who grew up in the public eye, from innocent little girl to Lindsay Lohan-esque car wreck. Except now Cadence has superpowers (the “how” still isn’t clear) and has decided to make amends, trading fame as Cadence Lark for fame as a masked vigilante. Either way, she’s still performing for the public.

In every panel of Furious #4, readers are not the only ones looking. The book starts with Furious beating up a hoodlum she thinks murdered a store owner. Heroic? Not quite. Looking on are the kid’s horrified friend and a police detective named Christopher McKnight, who manages to talk Furious down by telling her that the kid she’s just beaten is not guilty. How does he know? Because the real culprit was caught on camera. Everyone is watched by someone.

Even in Cadence’s one private moment, as she prepares to appear as Furious on live TV with journalist Jesus Martinez, the panels show her, not head-on, but as if we were seeing what she sees when she looks at herself in the mirror. The perspective is both intimate and impersonal, reminding us once again that in Furious, everything is a spectacle.

So if the dialogue in Furious sometimes seems stilted, it’s because the characters are chafing at their roles, awkwardly attempting to appease the audiences around them. Martinez is the cynical TV pundit trying to drive up ratings. Furious tries to be the righteous hero, but then channels some of her old Cadence Lark savvy in order to work the crowd gathered to watch Martinez’ interview. Furious #4 also sees the return of a long-lost friend with powers to match Furious’ own, whose bright red corset and melodramatic statements channel every single B-list super villain you could ever ask for.

Even Detective McKnight sounds like he’s reading straight from the police handbook when he talks Furious down at the issue’s beginning. But once the situation has been diffused, McKnight goes off-book – without changing his demeanor or diction, McKnight offers a subtle approval of Furious’ vigilante crusade and encourages her to open up to the public. It’s the most personal, unobserved moment in the entire issue, and even the art style reflects it: while most of the other scenes are divided into rigid rectangular panels, or even panels within panels to give the pages an asymmetric, punchy look that ups the tension while keeping a sense of structured performance, this page blends two depictions of Furious and McKnight into a single image, connected by a soft background gradient.

Furious is kind of like The Hunger Games: you can enjoy it on a basic level as a story about a kickass young woman, but it becomes much better once you look closer and realize the story is also about stories: about how people change when someone else is looking, and how another person’s gaze – whether it’s a single person or a reporter’s video camera or the paperazzi – can change the way others see us and the way we see ourselves. But unlike Katniss Everdeen, Furious knows how to work a crowd. 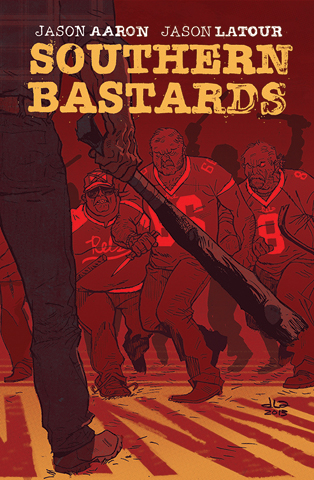 If you want to read amazing stories, you read comic books. This is the great secret of the last seven years or so – while most folks around the water cooler have had nothing to watch since Breaking Bad wrapped up, comic readers have their pick of a range of imaginative, challenging books. In recent memory, Image Comics has been at the forefront of this golden age and there is no better example of its scope and power than Southern Bastards, by Jason Aaron and Jason Latour.

Aaron has made a name for himself penning superhero comics of late, but Southern Bastards marks his return to the kind of gritty Hillbilly Noir that put his Vertigo series, Scalped, right at the top of my to-read list. This is a mean sort of story, of a backwoods town gone rotten, of drugs and crime and football and the Bible. Aaron says it best in the book’s afterword: “I love the south. The south also scares the living shit out of me.”

Aaron’s oscillation between tough talk and somber sentiment is matched by Latour’s artwork. Lines in one panel convey a deep stillness then coil with kinetic energy in the next. His minimal color palette is as oppressive as a humid day, imbuing everything image with the fatigue and irritability that comes with such miserable weather. You can practically smell the dog shit.

It is immediately apparent that this is a very personal project for both Jasons. They are sons of a region at odds with itself, where genteel manners rub up against the basest brutality. In turn, Southern Bastards is equal parts love and hate, and primed to explode.

I can’t wait to see the wreckage as the story unfolds in the coming months.

You can follow Jill, Ian and Stu on Twitter @JillScharr, @IanGonzales and @StuHorvath. Talk to them about last week’s comics, or this week’s, for that matter!