Published by IDW, Walt Simonson’s new Ragnarok comic is a post-apocalyptic fantasy tale. It opens at the end of the world. Thor, the Norse god of thunder and protector of the Earth, slays the Jörmungandr, the Midgard Serpent. He walks his nine steps and falls. That was the past. In the present, the world moves on. 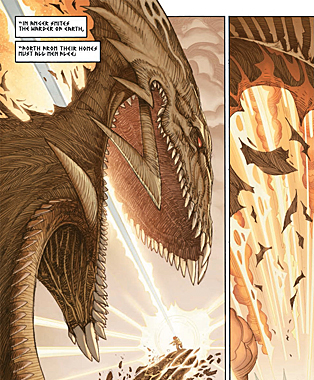 Ragnarok is Norse mythology’s apocalypse. Hel is unleashed. Yggdrasil, the World Tree, shakes and the whole of existence fears what is to come. The Norse gods battle their enemies and the war culminates in the deaths of Odin, Thor, Loki and so many more. The story ends with some of the gods surviving and two humans repopulating the Earth. Walt Simonson’s Ragnarok #1 takes place after the giant battle. Only here, the world is in darkness. The enemies of the gods live and rule what’s left of the nine realms.

Walt Simonson is no stranger to Norse mythology. His 1980s tenure as writer and artist on Marvel Comics’ The Mighty Thor is one of the most celebrated mainstream creative runs in comics. It’s one of my personal favorites, right next to Stan Lee and Jack Kirby’s time with the thunder god. So reading Simonson’s return to Norse mythology sans the Marvel Universe’s restraints is refreshing and exciting.

At its core, Ragnarok #1 feels like the stuff of an awesome Dungeons & Dragons adventure. Simonson introduces his main character, the dark elf Brynja. She is a wife, a mother and an assassin. She’s hired by a mysterious cloaked figure named Myrkr (whose name literally translates to dark or murky) to kill a dead god. Simonson gives us a glimpse of the world Brynja lives in and of where her path will take her (hint: it looks to involve a dead thunder god and his hammer).

Simonson’s art in this book is stunning. The storytelling is fluid and the creature design is top notch. The Jörmungandr’s seemingly endless rows of teeth are the stuff of nightmares. Another haunting image is of what appears to be Thor’s corpse. He’s chained in the fortress at the edge of the worlds. Simonson’s kinetic work is evocative of Kirby and Moebius. The panels in this book move!

An apocalypse story can be a very personal thing. Indeed, we all have our own personal post-apocalypse stories every day. There’s the job we probably should have taken, or the thing we never said to a loved one before he or she passed or there’s the person we were too afraid to talk to at the bookstore. Each regret is a little apocalypse that gives us a choice: learn from our mistakes or dwell in them and let life’s joy slip away. I don’t care much for dwelling on sorrow (we all do from time to time, but it’s ultimately pointless). It’s probably why I don’t like HBO’s The Leftovers. Moving on, though – that makes for an interesting narrative. We have so many events in our lives that have consequences we have to live with.

The reason I like this issue so much is that Brynja works for the Enemies, but she doesn’t live in a world devoid of joy. She loves her daughter, Drifa, and her motivations for taking this contract is for the benefit of her little girl. The apocalypse has come and gone and gallows humor remains. Things are bad, but they’re not so bad that there’s no room for happiness in this dark fantasy world. That and the art is so damn gorgeous. 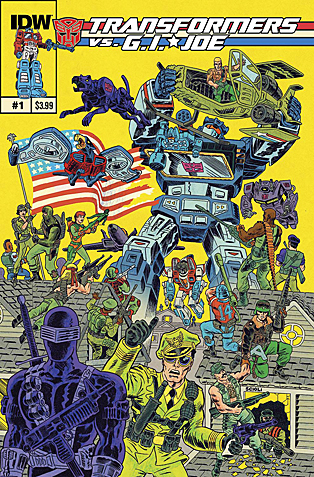 Transformers vs. G.I. Joe #1 is one of those comics you don’t have to think too hard about. One look at the retro art of Tom Scioli on the cover and you know that this is meant to be pure nostalgic fun. If you were a kid like me who only owned a few random Transformers back in the day, then you understand that having them fight G.I Joe (and occasionally GoBots and ThunderCats) was essential.

The way things unfold in this issue is like a mash-up adventure drawn from the collective consciousness of every child who mixed G.I. Joe and Transformers in the ’80s. And yes, it does bring back memories of the Marvel Comics ’80s crossovers as well. Scioli goes for a faded Kirbyesque newsprint style that wouldn’t be out of place in 1985, and even the writing is in the old school over-explanatory fashion. If there were many back issues to reference, then there would be boxes in the corners of many of these panels explaining, “*For more on this see issue blah blah”!

The story itself is simple. Picking up directly from the events of Free Comic Book Day, General Flagg seeks out Snake Eyes in his isolated cabin in the High Sierras, where he is chopping wood with his uniform/costume still on. Flagg is basically commanding Snake Eyes out of isolation, because a storm of crazy is brewing. That storm comes in the form of emissaries from outer space: Shockwave, Soundwave, Soundwave’s tapes and Starscream. After a failed negotiation between General Hawk and Ravage (the panther tape), a blazing battle between robots and Joes is under way! This is the climax to the issue, with a monster two-page splash battle between G.I Joe and Cobra in the Cobra-owned town of Springfield, with some exposition being the only lead-up.

The arrival of the Decepticons isn’t the only thing that’s crazy about this issue. The characters are rarely out of their signature uniform/costume, Hawk negotiates with a cassette tape that turns into a panther and G.I. Joe fights cobra troops on a playground. There is tongue heavily planted in cheek here, as well as reverent homage to the cartoons, toys and comics of ’80s youth. If none of this intrigues you, then this is probably not your can of Joe Cola.

While I enjoyed this issue, I realized quickly that I needed to throw away everything I knew but the most basic things about both of these franchises. Having watched the cartoons and read a lot of G.I. Joe and some Transformers comics, I have a fair idea about the backgrounds of most of the characters and the history of the teams. It seems like Scioli and Barber are throwing out any pre-existing continuity to keep the story flowing. Although this is supposed to be an early iteration of G.I. Joe, there are certain characters and vehicles from later in the series that are already in the picture. It’s a little jarring, since I have read so much of the original run written by Larry Hama since my childhood. This is an event that happens in its own unique universe, and interviews with Scioli and Barber indicate that this is what they seem to be going for. This is probably for the best.

Apparently, 2014 marks the 30th anniversary of Transformers, and the 50th anniversary of the 1st G.I. Joe action figure line. It’s insane how much longevity both of these franchises have, and how every once in a while in both print and onscreen they’ll cross over with each other. Due to the many unique characters involved in both franchises, I feel that there is an unlimited amount of stories that can be told about opposing forces of good and evil essentially blowing each other up. This miniseries has “fun” written all over it, and you can tell the creators had fun making it. What we’re looking at here is not war or first contact, but a celebration of the wonderful insanity of youth. 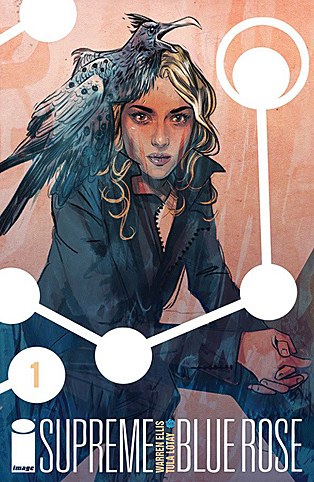 If you asked Diana Dane what her dream is, she might say it’s to get a satisfying job as an investigative reporter. By the end of Supreme Blue Rose #1, that dream sort of comes true – but not before Diana has a dream of quite a different kind.

The book opens with a young man in a wheelchair telling Diana about which places are real and which aren’t. Concerningly, Diana isn’t very good at telling the difference. Like many dreams, their conversation seems to begin in the middle, and jumps suddenly to a conversation between Diana and the faceless man named Enigma, from there to an anecdote about the man’s past and back to the young man in the wheelchair. The transitions seem abrupt, as one moment Diana is seated at a table in an old mansion and at another she’s on a beach and the house is far in the distance. But they’re abrupt in the way dreams are abrupt, and still retain a thread of a snaking, vague conversation between them.

Finally, the young man in the wheelchair imparts a final warning. Diana won’t remember any of what just happened, but she must remember one message: Don’t trust Darius Dax.

Guess who then offers Diana the investigative reporting job?

The art of Supreme Blue Rose #1 has a watercolor aspect to it, but with strong black ink lines and smudges over the washes of color to define characters and environments. The style echoes Japanese tsuki-e tktktk just a bit. The effect is lovely – the only problem I saw was with Diana herself, whose face is almost always drawn in exactly the same stiff, expressionless way. Overall, the blend of styles allows the art to seem both sharp and faded, again echoing the book’s dreamlike mood. But most striking of all are the lines and swirls of blue that cover almost every page, like a child took a blue crayon to the book. These lines seem to gather around the most “dreamlike” people and objects in the book. What’s more, they completely disregard the otherwise tidy panel borders. The effect is strangely beautiful, and very unmistakable.

These blue lines remain even after Diana wakes up from her dream about the house by the lake, the young man in the wheelchair and the man without a face. However, at this point the book loses a bit of its momentum. Now the issue falls back on story beats that I feel like I’ve seen in many comic book issues, TV shows and even the first acts of movies: the award-winning but out-of-work journalist, the ennui, the sassy black friend and the windfall job that a mysterious and wealthy stranger all but begs her to take. I mean, Diana didn’t even have to write a cover letter!

Not that the entire issue should have been vaguely ominous discussions in lonely scenery, like the first part was. It’s not even that I doubt the rest of the series will go on to subvert or embellish the tropes found in the second half. But the first part of Supreme Blue Rose #1 is where the book’s strengths are most on display, and I’m looking forward to Diana’s investigations taking her back there.