It happened beneath a castle. Dozens of miles underground, sheltered from the wintry wastes of the forgotten surface, in the world of Arx Fatalis. Sprinting past humanoid rats stabbing at me with rusted knives, I make my way through dark tunnels encrusted with car-sized Venus flytraps and hanging cocoons pregnant with God-knows-what. I light a torch, checking my paper map to note that I’ve entered a maze of narrow tunnels, pitch with darkness and inebriating in déjà vu. Ahead of me, a shaft narrows and turns from black to red. A slick wallpaper of human organs cakes the entrance, wet rib bones gleaming with fresh innards. This is where I kill the worm. 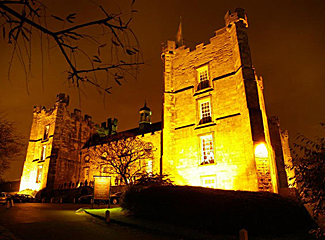 I spent my formative teenage years living in northern England, traversing cobblestone streets and roundabouts on dreary weekday mornings along the path to my old-fashioned “comprehensive” school. This meant posh school uniforms, bangers ‘n mash in the dining hall, casting calls for extras in Harry Potter (yes, I was in it) and, surprisingly regularly, parties in historic buildings. One such shindig was the end-of-school ball in my final year of sixth form. In the basement of an actual castle.

This British version of prom took place in 2004, my last year living in England after nearly a decade. Like most teens, when I wasn’t listening to The Coral, watching Jools Holland or playing vidjagames, I was hanging out with my mates. It was a vital, friendship-enriched time in my life, and leaving it all behind to return to Canada with my family was tough. As with other difficult episodes in my life, games like Arx Fatalis helped me to get through it.

I don’t really know where I am; I’m drunk, and have speed-run through several levels of the game world’s multi-layered sandwich of progressively challenging vertical levels. Certainly, I can’t be strong enough to survive this excursion. My torch flickers against the cave wall, revealing a massive cobweb in an overhanging tunnel. From behind it creeps a spider three times my size. Do I fight it? Shit no. I dash away from the arachnoid towards the blood ‘n guts-riddled entrance of the narrow tunnel ahead.

A thick, rumbling noise sounds off ahead of me. My torch flickers and dies, and I have no choice but to move towards the light and source of the sound. As I turn a narrow corner, something rushes towards me. Something huge. Is it a worm? Yes. A giant thing, the size of a subway car. Its colossal mouth opens, revealing a gaping jaw – practically a tunnel itself – flanked by lips of huge, spiked mandibles. There’s not much left to do but fight it. Stumbling backwards, I ready my sword. 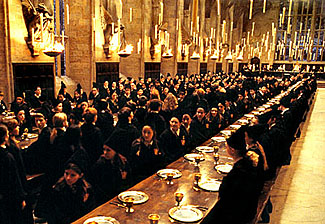 The limousine drops off our party of 10 or so at the garden entrance to the castle. We’re drunk. We’re wearing tuxedos. I’ve accented mine with red converse high-tops, because at 18, it seemed the cool thing to do.

At the castle threshold, a bagpiper squeezes his sack and the screech of musical wind welcomes us to a prior century. Inside, we descend stairs into the castle’s hollow, entering a medieval banquet hall with jugglers, jugs of mead and benches occupied by rows of my schoolmates. Is it Hogwarts, or a scene from A Game of Thrones? It doesn’t matter, because I’m fucked.

One of the few times in my life I’ve been black-out tanked, the night gradually fades into a disjointed slideshow of messy feast-eating, glass-clinking and cheering. At one point our table of 18-year-old kids, drunk on mead, has a big group weep after I tell everyone I’m going to miss them all an awful lot.

Laughing (I slice the worm), crying (then dodge its bite), embracing (chopping at its hulking, throbbing neck) each other, the raw companionship of the night moves from screaming chants in the guys’ bathroom, where we ritualistically shout a teacher’s name for no reason, to blitzed dancing in an underground wine cellar walled in ancient stone.

The worm is angry now. I’ve drawn its blood, as surely as it has drawn mine. I prod at it with my sword like stoking a fire. It roars, either in hunger for me, or in pain. Perhaps the latter? So I chop, slice, jump, swipe and slash, hoping to bring an end its presumably ancient life. I’m not sure how much time has passed – probably minutes – but it feels like hours. I’ve barely put any xp into my character, and many of these hits seem not to register. There’s no health meter to tell me how far my butchery has progressed, but the rhythm of my attacks encourages me to believe it can’t last forever.

Finally, with a quaking scream and lumbering squirm, the worm falls. It’s dead.

Wearied and drained – both physically and emotionally – I fall into a taxi and shuffle myself off home, curving the small county roads of rural England towards my family’s house at the city’s edge. Shambling drunk, I turn on the office PC and boot up Arx Fatalis. After a night of laughs, shouts and tears, I need some catharsis, so I take my low-level character for a daring run into the unknown depths of the underworld. Drunkenness subsides as adrenaline carries me roughly into the abyss, peaking with the death of the beast worm.

Killing the worm and celebrating the twilight of my teenagehood (in a castle) have blended together in my memory of that night. I’ve often used games as a coping tool for stress and anxiety; but here it was special, as the emotional intensity of the evening burned into that roaring achievement of conquering a seemingly insurmountable obstacle. When I emerged from the tunnel, I was in many ways emerging from childhood, and blisteringly aware that I had just reached the end of an era; having sliced my way through the tribulations of angsty teenagehood and opened up the branching tunnels of “being an adult.” Now, I was in control. 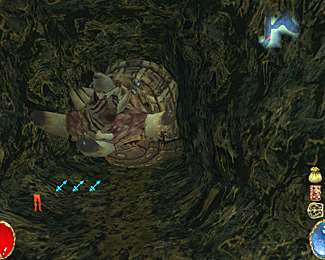 Teenagers themselves are the antithesis of control. At one point that night, the tunic-clad evening ceremony compere pleaded, utterly frustrated, for his rowdy, mead-soaked student guests to settle down, even threatening to end the night there. Games allow us to master our environments, in a way that the woozy, drunk madness of reality never permits.

It’s been 10 years since that night, and thanks to the Internet, I’ve kept in touch with many of those friends from my teen years. It’s been just as important for me to keep up the gaming, too.

These big, juicy, fantastical adventures help us to escape into a different reality. But that doesn’t mean we don’t bring our lives into them. Killing a worm in the wee morning hours helped me to overcome the challenging but real boundary between childhood and adulthood – making leaving a life behind just that teensy bit more manageable. Surely that says something powerful about the possibilities of play.

Pottermore: Back to Hogwarts!

Getting To Know You