I love comics. I’ve loved them since before I could read. I love them so much that sometimes things happen in the comics community that make my blood boil. It boils so badly that I threaten to quit comics altogether. The misogyny, the racism and the bullshit elitism that plague our community sometimes feels like it’s too much, like it’s ruining this medium. It’s not, though. There is more love in comics than there is hate and I think it’s safe to say Evan Dorkin feels the same way. The Eltingville Club #1 is the work of an angry comics lover, and it is exactly the comic we need right now. 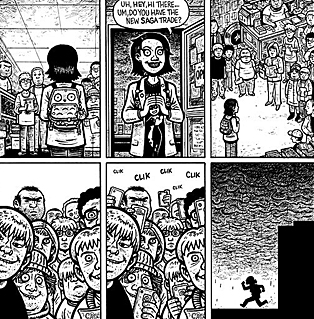 The Eltingville Club has been Evan Dorkin’s riff on the worst parts of fandom: the elitism, sexism and devotion to hairsplitting that plagues geek culture all too often. The strip has been around, in some form or another, for 20 years, but now Bill, Josh, Jerry and Pete are on a collision course with Karma. The Eltingville Club #1 is the beginning of the end for the Eltingville Comic Book, Science-Fiction, Fantasy, Horror and Role-Playing Club. It’s a funny read until it gets dark.

The Eltingville Club #1 begins with Bill Dickey’s first day as an employee at the local comic shop, Joe’s Fantasy World. He hopes to have his own shop one day and in his mind, this is the beginning of his dream. Joe’s is a dungeon. If the Eltingville Club represents the worst side of fans, Joe and his shop are the bleakest stereotype of comic book stores. The shop is a mess, Joe and his customers are insanely sexist, belligerent to new customers and they despise anything not published by “the big two.” It’s the worst! Joe’s Fantasy World reminds me of some of the worst shops I’ve ever been in. So Bill, terrible fan that he is, is right at home. He believes himself to be intellectually superior to pretty much everyone on Earth, so it’s no surprise that when Joe has to leave the store and leaves Bill “in charge,” Bill becomes drunk with power.

No one could skewer this side of our community as much as Dorkin does without loving the medium, its history and yes, even the fans. The first page is an homage to Fantastic Four #51, “This Man… This Monster” for Pete’s sake! Every single panel of this comic is packed with nods to geek culture. It’s equal parts love and scorn. But man, Evan Dorkin is angry, and he channels that anger into some great storytelling. There is a scene where someone gets hit in the face with a stuffed Doctor Who Adipose doll and another where Pete goes to battle armed with Hellboy’s Right Hand of Doom and Captain America’s shield, while Bill swings a replica of Thor’s hammer screaming, “Have at thee, motherfucker!” This comic is a hoot until the end. And even then, Dorkin bookends it with a pretty funny Fantastic Four joke before he gets to the poignant epilogue.

The Eltingville Club #1 features these characters at their absolute worst, so it makes the ending’s somber tone all the more unnerving. The issue isn’t just concerned with setting up the end, it’s also giving readers some background into these characters’ home lives and even shows the formation of the club. It works really well as a standalone tale. Every mean thing you need to know about these characters is on full display, but filled with Dorkin’s trademark wit and (begrudging) love. If you love comics, just go and buy this, OK? 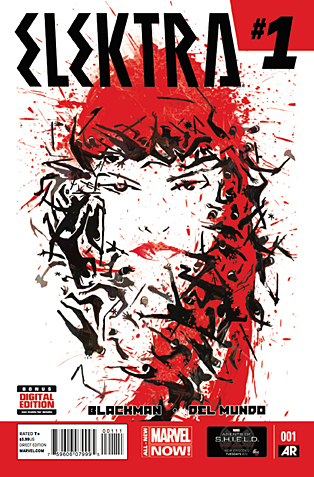 Elektra #1 begins with a woman talking about her mother. It’s not every day that happens in comic books. In just a few lines we find out that Elektra’s mother is long dead (which does happen every day in comic books, or at least it feels that way sometimes), but Elektra’s musings on her family help set a reflective, even intimate tone for the book.

It’s just the kind of intro needed when an old character gets a new book (and hopefully a new audience with it). I went into Elektra #1 knowing very little about the character, but these opening pages served as a refresher on the character’s long history while also establishing that the book entails a new stage in Elektra’s life.

Writer W. Haden Blackman previously worked on the Batwoman title for DC Comics, and the similarities between that book and Elektra run far deeper than lady protagonists with red hair. Even the art by Michael Del Mundo resembles J. H. Williams’ work on Batwoman. Solid ink lines are usually the bread and butter of comic book art, but Del Mundo largely eschews them in favor of a painted, almost watercolored look. It’s nothing like the minimalist – but equally gorgeous – art that graces the book’s cover.

Even panel borders occur only rarely; instead, most of the pages carve up moments of time via semi-diegetic borders like gnarled tree roots or pages on a desk. The book’s opening pages depict one Elektra next to the other in a sort of tableau of her life, as the ribbons of her costume, in a beautiful approximations of panel borders, twirl around her body.

These introductory pages were my favorite part of Elektra #1. Thereafter, Elektra goes to visit the Matchmaker, a woman who looks like she walked right out of a 1920s speakeasy. Her appearance was a bit jarring at first, but I quickly started to like it; the unique style makes the Matchmaker instantly memorable and keeps with the book’s stylized art. The Matchmaker doesn’t set up couples; she matches assassins to contracts, and she’s got a job she’s been saving for Elektra: bring down the former assassin called Cape Crow.

That’s where the book takes a turn for the weird. We suddenly switch to a guy wearing a lion’s head for a helmet who delivers an enigmatic monologue about a woman named Coreen and the desire to find a place where they could “die alive.” The lion guy breaks into a S.H.I.E.L.D.-guarded temple, where he finds the assassin Bullseye lying in a coffin-like pod, wrapped in mummy-like bandages but apparently perfectly alive. Lion guy says he’s after Cape Crow, too, but before he can get him he needs to “take a bite” of Bullseye.

The past two pages depict Elektra skydiving onto a place called “Monster Island,” which is probably where lion guy is as well. A collision is clearly imminent. Except that I’m not sure I care yet. As far as I can tell, Elektra took this job because being an assassin is her primary form of self-identity. This job is like the antihero version of “finding yourself.” She has no personal stake in finding Cape Crow that we know of. This lion guy, however, seems to have a very personal stake, as well as an interesting backstory mired in mysticism.

His pages remind me of Batwoman #21, which was told from the point of view of Killer Croc. But while that issue benefitted from following several issues that gradually introduced Croc’s origins and motivations, Elektra’s lion guy is just immediately inscrutable. What’s more, he’s inscrutable for a while – he gets eight out of the book’s 20 pages, yet gives readers very little actual information. It’s just the sort of vague weightiness that was, at times, Batwoman‘s greatest flaw.

Making a first issue of anything is no easy task, and though Elektra #1 stumbles in its second half it still manages to impress with its gorgeous art and unique atmospheric mood.

You can follow Jill and Ian on Twitter @JillScharr and @IanGonzales. Talk to them about last week’s comics, or this week’s, for that matter!