Captain Victory and the Galactic Rangers #1

Joe Casey, Nathan Fox and company get Jack Kirby. Captain Victory and the Galactic Rangers #1 is a reinterpretation of Kirby’s science fiction action/adventure epic of the same name. Pacific Comics published the original Captain Victory series in 1981. Kirby introduced the heroic Captain Victory, Klavius (his executive officer) and a whole universe of intergalactic heroes and villains. The series was a sequel of sorts to Kirby’s New Gods work over at DC Comics, but it’s unencumbered by the shared DC Universe. Casey and Fox waste no time diving into this world head first. 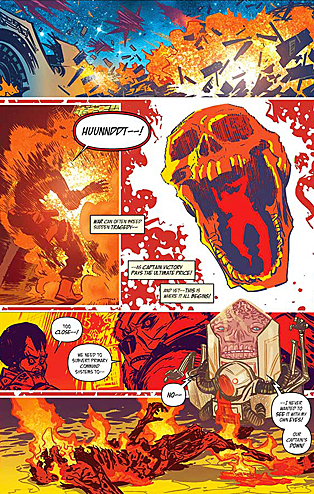 The story kicks off with Mekkanos gunning for Captain Victory and the crew of the Dreadnaught: Tiger. The page turns to a two-page sequence where the left-justified panels are actually letters that spell out “FIRE,” “BOMB,” “KILL” and “DEAD.” The entire sequence bombards the reader – it’s a tad unorthodox for a space battle, but it feels like something the King would love to read.

This issue is a contemporary remake of Kirby’s own first issue. Captain Victory’s starship comes under attack in space. Captain Victory is killed in the attack. His consciousness is downloaded into a new body and Captain Victory finds himself on 1981 Earth. All the broad strokes are there. Casey, Fox and company take the spine and big ideas that spring from Kirby’s mind and build on that foundation.

Casey is no stranger to Kirby. He and Tom Scioli’s Gødland was a love letter to Kirby’s Fourth World and Eternals work, so his bombastic writing style is a perfect fit for Captain Victory’s scope. Nathan Fox’s work in this issue is big and kinetic – influenced by Kirby, but very much the artist’s own style. Fox’s work transitions nicely with Ulises Farinas’ flashback sequence and Jim Rugg’s dream sequence.

Brad Simpson’s colors are another big star of the book. His work on the Dreadnaught: Tiger is bright, reminiscent of the bright coloring we’d expect to see in early Fantastic Four or Mister Miracle comics. However, his colors in the 1981 New York City scenes are muddled and grungy – even the neon signs of Times Square feel dirty.

Casey takes Kirby’s plot for Captain Victory #1 and applies more modern storytelling techniques to it. There’s more nuance and mystery to the supporting cast and I am looking forward to seeing where Casey and Fox go with some of the book’s more insidious plot elements. Also, since the original was a thematic (and possibly literal) sequel to Kirby’s Fourth World comics, I am curious to see how Casey and Fox adapt Captain Victory’s grandfather (Blackmaas in the original series) and his father (who clearly owned an Astro-Force harness similar to Orion’s). There are a lot of places this series can go after this first issue, and I can’t wait to see where Casey, Fox and company take this series. 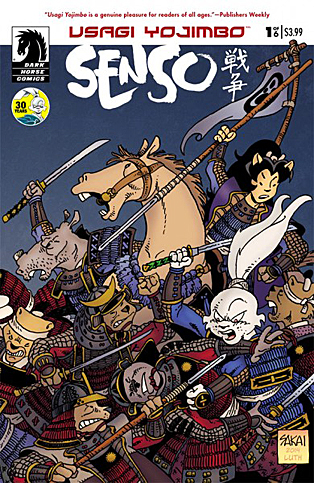 Warning: There are spoilers aplenty in this review.

Definitely read Usagi Yojimbo: Senso #1 if you’re a fan of the series, ancient Japanese battles and culture, anthropomorphized samurai and ninjas and crazy last-minute plot twists. For longtime fans, you should also check out on YouTube the great proof of concept animated short film “The Last Request” by Roel Robles. Much like I wrote in my Elfquest review, the fact that Usagi Yojimbo hasn’t been adapted into a full-length animated film is tragic, especially since Stan Sakai’s crisp artwork and fantastic world would translate easily to animation. For now, this short and some appearances in various incarnations of the Teenage Mutant Ninja Turtles TV show are all we have.

My familiarity with Usagi Yojimbo began like many people of my age: with a Teenage Mutant Ninja Turtles action figure. I remember seeing the figure on the rack for the first time 25 years ago at Toys “R” Us and wanting it instantly. I’ve always been into samurai culture, probably by way of the ninja oversaturation of the 1980s. This figure seemed in line with what the Turtles were doing, but something seemed different. It would be a few more years before I discovered that Usagi is a comic book character who only occasionally pops into the sewers of the modern age, as well as outer space from time to time. Usually this ronin spends his time wandering the countryside of 17th-century Japan, taking on random jobs and sometimes participating in battles.

In Senso, we see that creator Stan Sakai has decided to set this story 20 years in Usagi’s future. Miyamoto Usagi is older, wiser and a general in the army of the now adult Lord Noriyuki (he’s a child in the regular timeline). They are fighting against the army of longtime villain Lord Hikiji, and for most of this issue nothing seems too out of the ordinary for this series other than the time jump. Sure, there’s the giant turtle-shaped war machine that nebbish inventor Takenoko presents to Lord Noriyuku, but Noriyuku instantly turns it away since he believes in honor in battle. It’s only in the final pages that we’re given the inciting incident of this unique concept for the already unique anthropomorphized world of Usagi Yojimbo. As Usagi enters the battle to save his endangered son Jotaro, a giant missile comes crashing down from the sky on top of the battling warriors. We see the soldiers and generals on both sides look completely perplexed as a new party enters the conflict. What they don’t know yet is that these battle-crashers are from outer space, specifically a red planet named for a god of war.

OK, so I admit that if you’re going by the story presented in issue #1, that last part isn’t spelled out yet. I’ve read the press releases, and Stan Sakai has specifically said that they’re the invaders from the H.G. Wells classic The War of the Worlds. From what I’ve seen in previews for future issues there will be samurai fighting Tripods and ninjas fighting aliens. While Sakai has always kept Usagi Yojimbo reigned in and historically accurate, it’s always fun when he decides to cut loose from the formula and introduce mythical creatures, demons or – in this case – aliens.

I went into this issue blind, so the ending was a surprise for me. It isn’t until the last page that Sakai makes it clear that this object from the sky is not meant to be in this world. The introduction of the war machine Kameyama (Turtle Mountain) and mention of another war machine that’s in development is a hint that a lot of crazy stuff is going to happen, and the fact that this story takes place 20 years in the future of the Usagi Yojimbo timeline means that some of these longstanding characters may not make it to the end of the six-issue miniseries, Usagi himself included.

Sakai’s artwork is a joy to take in. This issue features many splash pages of epic battle, and Sakai’s ability to illustrate with fantastic detail large groups of warriors in battle is unmatched. While some may complain about the relatively bloodless violence, Sakai has always shown what needs to be shown without excessive gore, as he has always wanted Usagi Yojimbo to be a series for all ages. If I have one complaint, it would be that I sometimes had trouble keeping up with different character names and who’s who. Fortunately, it just meant I had to read through the comic more than once, taking in the fantastic art multiple times.

It’s been over 20 years since I started this journey, and I was happily surprised to see that Usagi Yojimbo will be celebrating its 30th anniversary this November. After taking two years off due to his wife being very sick, Stan Sakai is back with a new Usagi story that’s truly unique. Initially, I was surprised to see that Sakai jumped the timeline forward 20 years, but the fact that he’s also introducing the malevolent Martians of War of the Worlds means that there’s no telling where this story is going to go. If there was ever a jumping-on point, it would be with this miniseries, as it features many of the key characters of Usagi’s world fighting a completely new and unknown threat. I know from my Martian research that a battlefield isn’t the most sanitary place for germ-sensitive alien invaders. How long will it take for the invaders to succumb to these germs is another story, if they succumb at all. 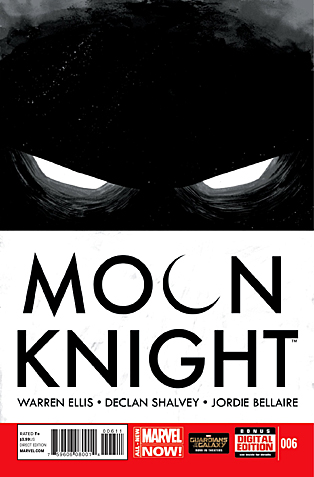 Fuck you, Warren Ellis. While we’re at it, fuck you, too, Declan Shalvey.

I say that from a place of love.

You see, the pair of you have produced what is probably the best comic book of the year, the first six issues of Moon Knight. I’m a sucker for your thoughtfully aggressive storytelling, Warren, so it wasn’t hard to convince me to give the comic a shot. Declan, though, it is your art that hooked me. Such fluidity! Such effortlessly delicious design sense! With Jordie Bellaire’s colors, some panels practically jump off the page and punch me in the face (like when Mr. Knight sidesteps the deranged S.H.I.E.L.D. agent in #1, or the way Moon Knight’s cape unfurls in #2, or the psychedelic mushroom sleep god trip of #4, or practically every panel of the comic book version of The Raid in #5, or…).

The stories are obtuse, surprising, mystical, savage and diabolically clever. Each issue is self-contained, a jeweled bauble, meticulously crafted and astonishing, both for their elaborate construction and the tiny space in which they are contained. They drip such cinematic flair you can hear the crescendo of a horns playing an imaginary soundtrack at the end of each issue. “You tell them all. When you see me coming? RUN.” Fade to black. Cue credits. Tune in again next month.

And then, with #6, you had the audacity to put a pretty little bow on it all, connecting all the previous stories together, not with some over-arching story, but simply by having a character live believably in the world you’ve constructed. The first words of #1 were spoken by the character who is introduced in issue #6. He’s there, touched by the events of every issue. Even the cover is a kind of bookend, the negative image of #1. It’s all so…so…fucking perfect.

I mean, how could you? How dare you?

And now it is over. I am sure Brian Wood and Greg Smallwood will do a fine job with the book, but I don’t want their take on Moon Knight’s psychosis. I want you to tell me more about the “ancient consciousness from beyond space-time” that has colonized Spector’s brain. I want your vision of the man with the bird skull head. You can’t just disappear into the night without explaining yourselves. It’s not right.