“People who kill people have lives, too.”

After a 9-year absence David Lapham’s noir series, Stray Bullets, returned to the shelves with two issues on the same day. I was excited to read the series again, but I was understandably skeptical at the prospect of reading Stray Bullets: Killers #2 the following month. The last nine years taught me differently. Thankfully, my Negative Nelly attitude was proven wrong. 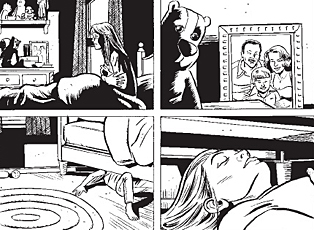 Stray Bullets: Killers #2 focuses on recurring protagonist Virginia Applejack and follows up with Eli, whom we met last issue. Like so many setups in Stray Bullets, it’s all wrong from the get-go. It’s November of 1986 in a Maryland summer vacation town. Virginia shows up at her Aunt Jane’s door. Ginny’s been missing for about half a year, so Jane is more than happy to take her in. As the story progresses, we find out Jane and Virginia’s mother don’t get along and that Ginny’s Uncle Jack is catatonic in the garage. Jane and Jack’s relationship broke when Jack withdrew into his own head after their son drowned. While Jane puts on a happy face and tries to move on, her cheerful veneer cracks as the issue unfolds. While Virginia learns of Jane and Jack’s troubles, she also meets Eli. The two begin an off-season romance by breaking into a boardwalk arcade that’s closed for the winter. It’s summer romance all turned around.

The thing that works so well in Stray Bullets is how every issue is a stand-alone tale, but when read together, it forms a complex and rewarding narrative that spans decades. While Killers is a new series about some of the same characters as the original, its overarching narrative remains to be seen (though the appearances of Virginia and Spanish Scott can only mean heartbreak for people like Jane and Eli). 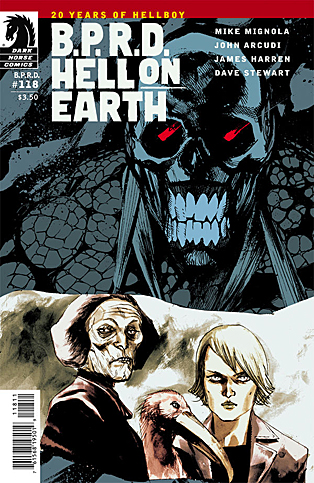 The last time Liz Sherman faced off against the Black Flame, she lit a fire so powerful that it didn’t only kill her enemy, it split the Earth too! The monsters aren’t hiding in the dark anymore. Hell has long since crawled its way out of that crack Liz’s assault left and evil set itself loose upon the world. All manner of tentacled creatures roam our world freely, killing and transforming anything and everything in their path. This is the world of BPRD: Hell on Earth. This is the world Liz Sherman is fighting for when she goes up against the newly resurrected Black Flame.

BPRD: Hell on Earth #118 is the penultimate chapter of the “Reign of the Black Flame” story arc. In it, the BPRD field team is besieged by monsters while Liz and the recently resurrected Black Flame go toe-to-toe. I’ve said before how great it is to see Liz with her confidence back, and this issue keeps building her up. Black Flame reveals where he went after Liz killed him, which ties all the way back to Hellboy: Seed of Destruction #1. He was one with the Ogdru Jahad. When Liz realizes just how powerful the Black Flame has become, she flies (FLIES!) at him and unleashes everything she has.

Yes, you read that right – Liz Sherman has gone full Human Torch on the Black Flame and it is fucking awesome!

The battle is intense, but it will spill into next issue. The stakes are so high at this point, I am a little worried for Liz. Though in a world with all the monsters, a full-on super flame woman would be a pretty great agent for the BPRD to have. And speaking of monsters, James Harren draws some amazingly gross and squishy ones in this issue. Every page drips ectoplasm! It’s damn near perfect!

While this issue is mostly Liz being awesome and Black Flame monologuing, Iosif, the Russian Special Services director who was beaten pretty badly last month, has a character-defining moment. It’s amazing how much development he gets in what is basically a brawl issue. Kudos to Mignola, Arcudi and Harren for leveling this already brilliant horror comic up to high octane without losing the creepiness that’s given the book its longevity. Seriously, this book is consistently my favorite read month in and month out. 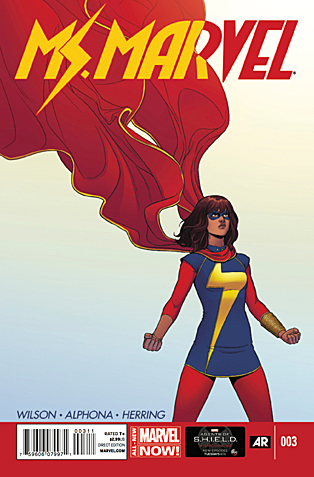 The first two issues of Ms. Marvel were about the crazy night that Kamala Khan acquired her shape-shifting powers. Ms. Marvel #3 is about the days after, as Kamala balances mosque, school and friends with frantic hours spent Googling “woke up as a polymorph” and “embiggening.”

As she told us in issue #1, Kamala was uncomfortable in her own skin even before acquiring her powers. So her return to routine in issue #3 is a slow buildup of tension as she finds everything just a little bit harder to bear.

It’s no fun for Kamala, but it does give readers the chance to get to know some of the other people in Kamala’s life. At a youth lecture at her mosque, for example, Kamala asks why the girls have to sit in the back behind a screen while the boys, including Kamala’s pious older brother, can sit in front by the sheikh. When the sheikh’s answer proves unsatisfactory, Nakia encourages Kamala to sneak out with her, noting, “It’s not like they’re gonna notice we’re gone.” We’d previously learned that Nakia disapproves of alcohol and chooses to wear a headscarf even though her own parents wish she would take it off, so her decision to leave a religious lecture tinged with sexism complicates her character as well as her faith.

Bruno’s moment is far less nuanced, but more relevant to the immediate plot: he has a deadbeat brother who casually asks Bruno to steal from the convenience store at which he works. Bruno, upset that Kamala is upset at him (high school drama! I love it!), spurns him.

Meanwhile, between frustrating lectures, her fight with Bruno and fruitless Googling, Kamala suddenly loses control of her powers once more. She seeks refuge in the high school gym and, away from other people, not only calms herself down but finds that she has more control than she thought. It’s a beautiful moment, as panic gives way to curiosity and then elation as Kamala tests out her strength – and takes out her frustration – on the locker room’s walls and benches. The sound causes the gym teacher to come running, and Kamala’s enormous smile disappears when she finds herself with a detention.

But this isn’t even Kamala’s only attempt at awkward, failed superheroics – later, on her way to the convenience store to talk to Bruno, she sees a criminal threatening him with a gun. Not realizing the criminal is Bruno’s brother or that Bruno knows he’s in no real physical danger, Kamala morphs into Captain Marvel and rushes in – but it doesn’t go well for any of them.

Ms. Marvel is still laying the foundation for its titular character – Kamala hasn’t even called herself Ms. Marvel yet, or worn the already-signature costume – but the book already feels like it’s found an easy-yet-wonderful rhythm. Writer G. Willow Wilson expertly juggles high school drama, nuanced religious practice and supherheroism, creating in Kamala a character who introduces new perspectives and backgrounds to Marvel’s superhero roster, while still being relatable to just about anyone who’s been through high school.

You can follow Jill and Ian on Twitter @JillScharr and @IanGonzales. Talk to them about last week’s comics, or this week’s, for that matter!

The App Hole: Something Trivial