All right, that’s a strong statement, and obviously not literal. So to put it another way: more than any single component of Mass Effect, Garrus embodies the tone, theme and characterization of the series.

Garrus is one of two characters who’s a full party member in all three Mass Effect games, alongside Tali. (Unless, of course, you let him die in Mass Effect 2 and import that save into Mass Effect 3. It’s also apparently possible to reject him if you time things right in Mass Effect 1, but I’ve never even seen this option short of YouTube). 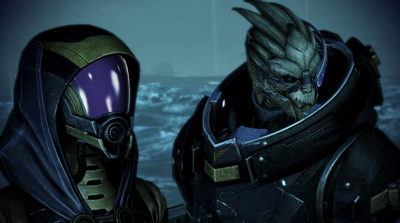 Unlike Tali, though, the game doesn’t allow you to be mean to Garrus. Once he’s recruited, Shepard consistently respects him and his choices, even when playing full Renegade. Upon reuniting with Garrus at the start of Mass Effect 2, Shepard is delighted, saying “Garrus! What are you doin’ here?” That’s the neutral option. Compare this with Tali, who can be jerked around by the player in all three games: in the first, Shepard can reject the idea of giving information for Tali’s Pilgrimage; in the second, she can be treated as a rival upon being reunited with Shepard and one of her wounded companions sold to the Illusive Man; and in the third, she can be killed and her entire species exterminated. It’s impossible to abuse Garrus at this level. The game, quite simply, likes him.

So how does it work for Garrus to be liked? First, the game treats him as a subject more than an object. Most other party members serve as representations of people or groups as much as they do characters. Wrex is both a character and a representation of the best of the Krogan people. Likewise, Miranda is the good side of Cerberus. Other than Garrus, only Liara is really given an interesting personality that diverges from the Asari she represents, and even that’s only partial. Although Garrus is the only Turian, he’s allowed to be an individual, and rarely speaks of his culture needing or wanting or doing things. Garrus is aided in this by the Turians not having a huge history they need an embodiment of, as the Salarians, Quarians, Geth, and Krogan have. He’s allowed to be his own person.

In the second and third games, he’s most easily summarized as Shepard’s best friend.

Or, more simply, the other characters can easily be summed up as traits. Miranda is the overachieving perfectionist one, Wrex is the violent one, Liara is the nice one, Thane is the dying one, EDI is the robot, and so on. (This has the unfortunate side effect of making most of the Human characters in the games seem boring, particularly Ashley and Kaidan in the first game, and Jacob in the second.) But once again, Garrus can’t be categorized that simply. In the first game, he’s the ex-cop struggling with the rule of law, which is immediately more complex. In the second and third games, he’s most easily summarized as Shepard’s best friend.

As Shepard’s best friend, Garrus is allowed to serve as what might be called “the voice of the game.” What he does, and what he wants to do, generally fall within the boundaries that the game’s morality sets. While Shepard can almost always choose to be a jerk or to be nice, or to be violent or to negotiate, the story has to be allowed to progress – Shep can’t break it. Garrus serves as a consistent anchor toward the “right” way to play.

In each game, Garrus’ personality reflects the overall moral feel of the story. In Mass Effect 1, in many ways the story of the first human Spectre, Garrus is a former C-Sec operative who felt too constrained by the rules. He’s still generally Paragon-leaning: for example, when Wrex kills Fist in front of the party after both the Krogan and Turian have been recruited, Garrus joins Shepard in telling Wrex not to do that again.

But in Mass Effect 2, Garrus, like Shepard, has been detached from his support structure, dropped into hostile territory and has to try to do good in a place where playing by the rules is totally ineffectual. Shepard joins Cerberus, while Garrus creates a vigilante mercenary group as “Archangel.” In the third game, Garrus has returned to the more conventional hierarchy of the Turian military, though he joins with Shepard. Whatever ethical dilemmas either Shepard or Garrus faced about their allies in the second game are replaced by the single-minded drive to defeat the Reapers.

It’s not merely the particulars of Garrus’ storyline that have him fit into that role. Garrus’ personality also fits. The Turian provides a dry, semi-detached commentary on events that tends to match the tone of the game. He’s the buddy in the action movie of Mass Effect, who recognizes the ridiculousness of events, but also cares about moving them forward, in the right way. Here he stands apart from the other characters, who almost always engage directly, without that detachment, whether it’s Kaidan’s earnestness, Wrex’s growl, Mordin’s curiosity or Liara’s breathlessness.

That detachment matches how Mass Effect comports itself, as discussed elsewhere. The series doesn’t play at being “immersive” where “you” are the main character. Mass Effect instead presents itself as a cinematic adventure where you control the main character over the course of a cinematic epic. It does this with its third-person viewpoint, as well as various gimmicks with the “camera” of the game, like the film grain in Mass Effect 1, or the way that the later games’ flashbang grenades cause player perception of Shepard and the screen to be blurred, instead of Shepard’s vision. 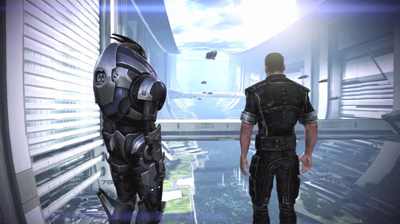 He’s also just well-written. That dryness is also a droll friendliness; his jokes land, his pathos feels genuine. It’s no wonder that the goodbye scene between Shepard and Garrus on the Citadel toward the end of Mass Effect 3, when they compete at target practice on the Presidium, is one of the most touching.

(One interesting side effect of Garrus’ voice being the voice of Mass Effect is that it consistently pulls the series toward a masculine point of view, even if you’re playing a FemShep character. Almost all of the major voices of authority like Anderson or The Illusive Man are male. Only Miranda is really an exception. Garrus possesses a thematic authority.)

Finally, Garrus is promoted in the games via his gameplay usefulness. In all three games, he’s able to become an expert in the use of the sniper rifle, which is especially useful in the chaotic combat of Mass Effect 1, where it can knock enemies over. As a Turian Rebel class in games 2 and 3, Garrus keeps the sniper rifle, and adds the Overload skill, which tears through enemy shields so well that it’s possibly the single most useful skill in both games. It’s the combination of his role in the story and his role in combat that make it easy to see why Garrus is probably the most popular character from the Mass Effect series.

Rowan Kaiser is probably playing Mass Effect as you read this. Which is good, because he’s writing a whole book on that seminal series of science fiction games. You can find out more about Possibility Space at the project’s Go Fund Me page and donate if you want, but Rowan prefers donations to the Unwinnable Weekly Kickstarter while that’s up. Additional excerpts from Possibility Space will appear on Unwinnable in the future – stay tuned!

Bad Games Are Good For No One
Previous Post