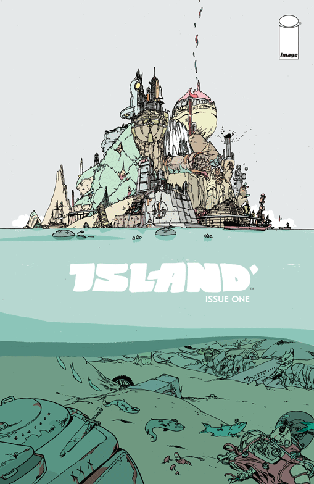 Island is the kind of comic that can prove difficult to review. It’s an anthology comic, so a reader’s mileage may vary depending on their interest. What separates Island from other great anthology series on the stands is its curators. Storytellers Emma Rios and Brandon Graham have created a book influenced by anything from Humanoids to Tokyopop. It’s the kind of comic that couldn’t exist five years ago, but is now selling out on comic store shelves.

While I was reading Kelly Sue DeConnick’s prose piece about her friend, the poet Maggie Estep, I found myself touched by her note about cigarettes. I haven’t had a cigarette in one year and seven months. I smoked for about 16 years of my life. I hate everything about cigarettes but if I was diagnosed with a terminal illness or found out Earth was going to blow up ala Krypton, the first thing I would do is buy a pack of Camel Lights and a Bic lighter. It’s disgusting, but the truth in “Railbirds” cut deep.

Kelly Sue’s piece in Island # 1 and the other stories in this issue have an honesty that ties them all together in a nice thematic ribbon. Emma Rios’ “I.D.” deals with people’s unhappiness with who they are. Brandon Graham’s Multiple Warheads story deals with the inadequacies we all feel at one time or another in our romantic relationships. Ludroe’s “Dagger Proof Mummy” explored humanity’s need for a hero. Granted, these are all the broad emotional strokes of the stories. Each story has an incredible amount of craft in it. Island # 1 sets the bar high for the rest of the series. 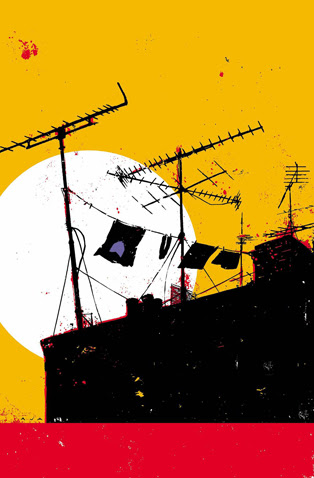 And so it ends, not with a bang but a ‘bro’. Well, actually with a bunch of bangs, bros and wonderful stretches of silent visuals. So long to the wonderful run of Hawkeye that only the creative team of Matt Fraction and David Aja could bring, with major shout-outs to Colorist Matt Hollingsworth and Letterer Chris Eliopoulos, and also to Annie Wu for her wonderful artistic contributions to past issues of this series.

This issue features many call backs to this run, and also features many of the key characters established in the “Hawkeye Universe”. Kate Bishop, Pizza Dog, Barney Barton, The Clown, The Tracksuit Draculas, Clint’s neighbors and even brief cameos from Clint’s superhero exes Natasha and Bobbi. If only longtime C-Lister and arch nemesis Crossfire was brought in, it would have comprehensively filled out the ranks for the crazy completist Hawkeye nerd in me. But as a closing chapter to a wonderfully unique and memorable run, it was a perfect and succinct way to end a story told in a closed-off corner of Marvel Universe Bushwick. Well, closed-off except for when we followed Kate to L.A.

The plot of this issue is pretty simple: Clint and Kate finally bring down the Russian gang that has been trying to take over Clint’s building since the beginning of the series. It’s not the resolution that matters though, but how we get there. This is told with a variety of narrative techniques, creative Eliopoulos lettering and clever David Aja visuals, and at the end of the day this is sequential storytelling at its purest. Love it or hate it this run of Hawkeye will be a standard that all future Hawkeye storylines will be compared to. In some ways I feel that this will be the creative standard that Marvel comics will be compared to in the next five years of this decade, or at least should be.

While this issue is more visual than anything, Fraction’s influence is still strong. The way he makes Team Hawkeye’s victory at the end feel earned is by highlighting the cold evil of The Clown and the vicious greed of the Tracksuits in the span of a few pages. When you see the decisions they make and how they sharply contrast against Team Hawkeye, you realize that this is classic comic book good and evil 101. This is a not a knock but a compliment, as many fail in conveying this ancient and effective storytelling technique, especially while utilizing so many narrative techniques unique to comic books.

When Fraction and Aja’s run on Hawkeye began it was a part of the Marvel NOW! initiative. I enjoyed much of the output of that initiative because it was basically Marvel not trying to ape what DC was doing with the New 52, but go in a different direction with what they had, encouraging creative team changes on books where you never saw staff change. For the most part, it inspired fantastic runs on books that will hopefully be sought out in collected form for years to come. Sadly it seems like the experiment is wrapping up now, and Marvel is currently involved in a yet another massive company-wide shift via alternate dimensions and etc. While I like a number of things going on in the Secret Wars series, it still sounds like Marvel’s main motivation is for their little vacuums shrunk by Pym Particles to slowly suck the dollars out of the wallets of many, sometimes at the cost of storytelling.

This issue comes after a massive delay, which may grind the gears of some who quickly scream “Early Image!”, “Kevin Smith!” or “All-Star Batman” at such delays. In my opinion, in this current marketplace, what matters is how the finished product looks and reads in the future. While most of those things I mention above read terribly in collected form now, I don’t think that will be the case with Hawkeye. This is a series that will greatly benefit from being collected in one Omnibus edition, as it is a self-contained run telling the stories of a number of characters related to Clint Barton that doesn’t ever cross over into some company event or have a weird fragment from whatever odd flavor of the year is wafting through the Marvel Universe. While there are some great ideas in Secret Wars and Battleworld, how will that read in 15 years? It’s a big question, like why a great X-Men trade has all of these parts where Dr. Strange and Dr. Doom are hanging out in a lair not unlike Snake Mountain, and there’s all this talk about a massive wall not unlike a fantasy series on the air at the time that was very popular. Not a problem with Fraction and Aja’s Hawkeye.

So it ends, a series that was very special. While an occasional wart popped up, it ultimately helped, and became part of the collage of creativity that went into the story of two archers and their friends with no superpowers who just want to do good. For me, it currently exists as both a goodbye to a great run and a goodbye to the Marvel Universe of old, showcasing what great creative heights it could achieve. We’ll see how this crossover works itself out, but we could have very well had one last wonderful moment before it was mandated from above that everything we’ve known in the 616 end with “And then the universe blew up.”