I live in the desert. La Quinta is one of a handful of oases huddled along the southern side of the Coachella Valley. During the summer, temperatures spike into the 120s, but during winter it is gorgeous here – sunny and temperate. That’s why our town becomes crowded this part of the year with snowbirds – rich old folks from Canada, the Pacific Northwest and elsewhere. This is all new to me. We only just moved here last summer. I’m still learning the ebb and flow of people that comes with the change in seasons. I’m still learning, for that matter, the ins and outs of the seasons and how to deal with them.

The summer, of course, is formidable. Your air conditioning unit is not just a luxury, but a vital tool of survival. Like scuba divers depend on their tanks, you live or die by your AC. Just as humans aren’t supposed to be underwater for very long, we also aren’t supposed to be out in the desert either. Nature, ever keen to remind us of this, populates the desert with deadly creatures to drive the message home. 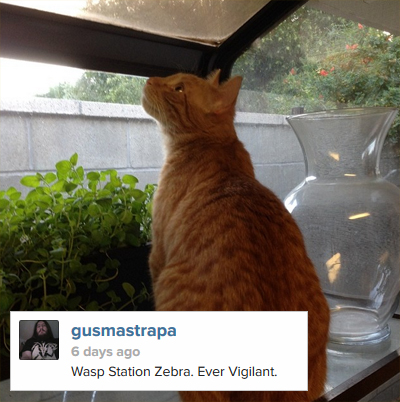 The summer is rattlesnake season. The devils slither out in droves, biting so many dogs that my wife’s vet clinic runs a special “rattlesnake aversion” class. The gist of the class is simple – to make a rattling sound, then scare the fuck out of your dog until they associate those bad vibes with the sound of a shaking tail. Even still, my wife’s clinic will dish out antivenin by the truckload.

I just learned this week that the wasps come to roost this time of year. When we first moved into our house last summer the acidic stench of poison hung over the south side of the house. I didn’t think much of it, but in retrospect the handyman must have hosed down some nest that had took hold, undisturbed while the house was empty.

The meager airspace around our house has been wasp-free until a week ago.

Like the snowbirds, the wasps showed up in droves. But instead of clogging up the aisles at Trader Joe’s and making huge lines at Starbucks, they’re buzzing around the sliding glass door off our kitchen.

Besides, this tiny property, with barely six feet between wall and neighboring fence, is barely big enough for the people and puppies crowded into it. There’s no room for extra life, no matter how small. 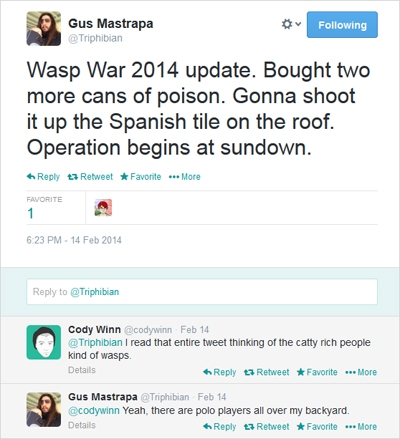 And so I wage #waspwar2014 – an ongoing saga which you can follow on Twitter. I thought, stupidly, that one or two skirmishes would be the end of this fight, but my enemy is tenacious. I learned, firstly, that spraying the wasps out of the sky with canned poison may be satisfying, but it isn’t efficient.

The trick is to wait until sundown when the wasps have returned to their nests. That’s when you murder them where they sleep. My problem, of course, is finding all of their hidey holes. At first I stuck to the south side of the house, prowling the eaves with a can of poison in my hand, but I discovered that the little monsters just moved to the north side of the house. So I expanded my nightly patrols. I now bring a mop handle to knock the nests down after I’ve killed its residents. The sweeps are becoming part of my routine. I am learning to live with this extended conflict. This week I will add to my arsenal by purchasing wasp traps, clear tubes that lure the insects and snare them inside, where they starve or suffocate.

I haven’t ruled out calling a professional, but for now this is a battle I’ve got to fight on my own. I know I’m not supposed to be here. But I am. And I’m not going to let some stupid bug make me sorry I put roots down in this crazy place. A rattlesnake, on the other hand, could make a convincing argument.