I don’t play The Novelist any more. I play it every day.

The Novelist is an indie game that puts you in the role of a spirit haunting a young family’s summer vacation house. Dan, the titular novelist, wants to spend the summer working on his third book. Linda, his wife, wants to work on their marriage, which has begun to cool, as well as her painting, which she put aside to raise  their son Tommy, a shy, troubled child who has fallen behind his peers in reading and needs extra tutoring. 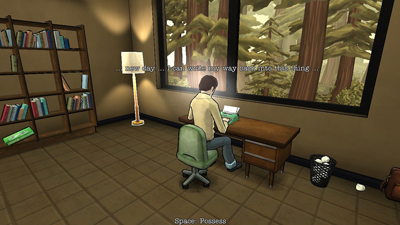 The game is divided into nine levels, each of which takes place in the house on a separate day. In each level, Dan, Linda and Tommy will each want something different. Dan wants to spend the day working on his book. Linda wants the family to go hiking together. Tommy wants his father to play a game with him. As the spirit, you explore the house, reading their letters and journals and listening to their secret thoughts in order to determine what that thing is. But no matter how thorough you are, at the end of each level you can only choose one character – however, you can also make a compromise with a second character. Either way at least one of the three will always be disappointed.

That’s the way life goes, isn’t it? Even knowing the rules, knowing the premise, I was so excited to play The Novelist. A video game about a fiction writer! It felt like the game had been created especially for me.

The system seemed perfect. But what happens to that system when it’s supposed to be Dan’s turn to work uninterrupted on his book, but Linda wants him to come to her grandmother’s funeral? How to explain fairness to a little boy who only understands that he’s alone again, who won’t stop filling the house with sad crayon drawings of each new disappointment?

At the end of each level, you see three still tableaus of the family experiencing the consequences of your choices. One image fills you with hope, the other two – no matter which two you choose – with increasing dread.  I always felt like I had made a mistake.

My system crumbled fast. When I made my last choice and the summer ended and the screen faded to white, Dan finished slightly behind his family in terms of choices and compromises. I still thought, somehow, that it might be okay. Dan had worked hard on that book, but he’d been a human being too. Surely things would turn out all right! 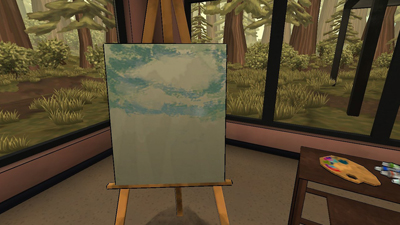 Here’s the ending I got:  In the end of my first playthrough, Dan’s book was poorly received. Simply put, it just wasn’t any good. He wrote one more book after that, and then never published again. Instead he got a desk job that supported his wife Linda’s painting and gave him plenty of time to tutor Tommy.  Dan and Linda’s marriage, which had strengthened over the course of the summer, never wavered again, and the two were inseparable for the rest of their lives. Tommy, whom I feared I had hopelessly screwed over, grew into a well-adjusted teenager and then later an award-winning artist.

I restarted the game. And this time, I was determined to make Dan’s book a success.

This time my playthrough would be purely scientific, an exercise in game design. The Novelist is only a game, after all, and games are nothing more than computer programs, that take in one variable and return another. I would focus on this program, not the individual narratives it yields. I would learn its rules. Curiosity, not emotion, would guide my decisions.

(I’ve never been good at that. I tried the same thing in Elder Scrolls V: Skyrim, telling myself that, to experience the full scope of the game I had to do a second, evil playthrough to complement my heroic, virtuous first one. Yet each Dark Brotherhood quest took me twice as long as it should have because I spent so much time dithering and psyching myself up with repeated cries of “No! I am evil!”)

Almost immediately my resolve slackened this time too: I decided that,  instead of giving Dan every choice, I would make him compromise in every other level, and give either Linda or Tommy the choice.  That way Linda and Tommy would get something, and maybe my ending wouldn’t be quite so bad.

In my first playthrough, a tableau at the end of the first month showed Dan and Linda laughing and cuddling. In my second playthrough, the first month ended with a tableau of the couple sitting uncomfortably in a restaurant, while the accompanying text told me they could find nothing to say to each other.  I felt a frisson of dread when I read those words.  Could I really go through with this?

Yes, I reminded myself – this was my second playthrough, where I test the game’s mechanics, do all the things I hadn’t in the first one. In this case, that means writing a good book. No dithering – I am a novelist! 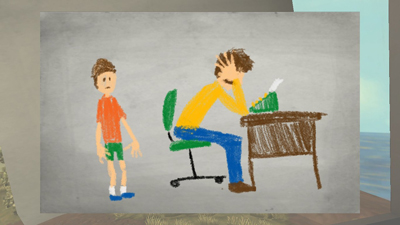 The next jolt came at the end of the sixth level, when Tommy, whose summer had been one disappointment after another, threw a hysterical fit. He had never done that in my first playthrough.

Nevertheless I held to my system: Dan gets one choice, Tommy or Linda take turns getting the second. And in the end I got what I wanted, or at least what I had been playing for. Dan’s book rocked. He went on to write 12 more books and went down as one of the most important authors of the period.

Tommy struggled in school and withdrew into himself. By his early twenties he was stuck in a pattern of few friends and forgettable jobs. Linda did resurrect her painting career but things were never the same between her and Dan. They didn’t divorce, but their marriage was passionless and unfaithful on both sides.

Then I took stock. This game had affected me far more than I had anticipated. I had already written a straightforward review of the game. Now I realized I wanted answers – more answers than I had gotten from my two playthroughs.  I still had the email address of the game’s creator, Kent Hudson, from when I did my review, so I emailed him with a few more questions, ending with the one that, at the time at least, I most wanted answered: is it possible to win The Novelist?

Kent told me what I wanted to hear: “If you play carefully and use your compromises wisely, you can actually have a happy ending for all of the characters. It takes a lot of work, though…but so does finding happiness in real life.”

But Kent also said that there’s no way to win The Novelist. He doesn’t even seem to consider this ending as the “win” state. 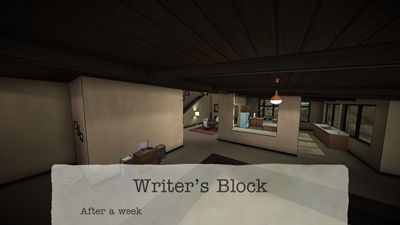 “I like to think of The Novelist as a question game, not a message game,” he wrote. “When it comes to whether it’s better to achieve great works or be a great family member, I don’t know the answer. It’s a question I struggle with almost daily.”

This answer addressed the question that I realized I truly wanted answered: is The Novelist real? My own two playthroughs had both been so bleak. Did those playthroughs reflect the experience of The Novelist‘s creator, perhaps over the course of making the game itself?

“I definitely had various situations during the development of the game that mirrored the kinds of choices the player has to make in The Novelist, but none of the chapters in the game are particularly biographical,” said Kent.

And from what he shared with me, my two Novelist experiences don’t reflect his own life, where Kent says he’s been able to achieve a balance.

That’s why he programmed the possibility of a three-way compromise ending that made Dan, Linda and Tommy happy. He hadn’t originally planned on it, he said, but in development he realized that to make that ending impossible was itself a statement, and one he was unwilling to make.

“If I designed the game such that you could never have a happy ending, or in a way that gave one character more sympathetic scenarios, that would become the message of the game. I didn’t want to do that, because doing that would invalidate the player’s input. That’s why I put in the compromise system.”

Only by compromising can all three characters have happy endings together. “And that’s a message I’m okay with,” said Kent. 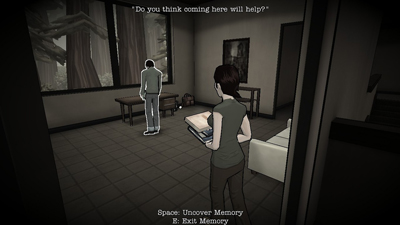 But if I had asked if The Novelist was real in the first place, then part of me thought that it was.  Why had I, without even realizing it, taken this game so strongly to heart?

I’ve never had a problem  relating to fictional worlds and characters. Quite the opposite. But The Novelist doesn’t have strong characters or elaborate worlds. Instead, it has empty space and fragments of potential. I thought I would be playing someone else’s story, like most videogames. Instead, I found myself playing with mine.

I want to write good things more than I want to be a wife and mother, but I also fear being alone more than I fear a mediocre writing career.  The Novelist tapped into both, and dangled the inextricable tangles in front of my face. How will I know where one begins and the other ends? Never before has a game hit me in my most cherished hopes and my most guarded fears all at once. Never before has a game left me with nothing to look at but myself.

So no, I don’t play The Novelist any more. Much as I love this game, I don’t feel a need to go back and find that mythic three-way happy ending. No matter how many times I play, there will only be one novelist who can answer all of the questions I still have – and she doesn’t know the answers yet.

Jill Scharr is a tech journalist at Tom’s Guide in New York City. Catch her taking fiction way too seriously at @JillScharr.

Flavor Text Is The Spice of Videogames
Previous Post