Thanksgiving is upon us, America.

I used to think of Thanksgiving as the holiday sandwiched between Halloween and Christmas. Sure, there’s a great dinner in there, but it doesn’t have the taboo overtones of Halloween, nor does it have the gleeful anticipation that surrounds Christmas. Thanksgiving is centered on an enormous supper with family. Its practice is, ideally, wholesome (even if its storied origin may not be, but that’s a tale for another time). Over the past few years, I’ve come to appreciate Thanksgiving in its own right. It’s a time of reflection – a time to be thankful for all that one has.

I, for one, am thankful for my supportive family, my amazing friends (including the wonderful folks I’ve met while writing for Unwinnable) and the many blessings bestowed upon me (employment, a roof over my head, etc.). 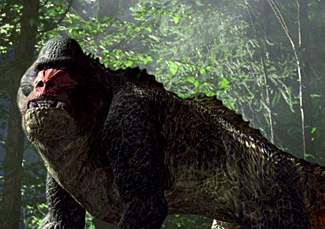 One of the reasons I didn’t quite “get” the holiday (aside from being a tad spoiled) was that I never had a set movie playlist for it. Halloween has horror movies. Christmas has It’s a Wonderful Life, A Christmas Carol and Doctor Who Christmas specials. But Thanksgiving? Sure, there’s A Charlie Brown Thanksgiving, Hannah and Her Sisters and Planes, Trains and Automobiles, but those movies don’t feel like they belong to a Thanksgiving genre the way, say, Scrooged or Gremlins feel like they belong in the Christmas genre. The closest genre I can think of that would be appropriate for Thanksgiving is time-travel science fiction.

I was flipping channels the other day and came across Sir Ben Kingsley with a bad fake tan and bleached hair. He looked particularly slimy, so it was clear he was playing a greedy corporate executive. Naturally, I thought, “Oh, this should be interesting.” The movie turned out to be A Sound of Thunder, a sci-fi romp about a group of time-traveling big game hunters who accidentally change evolutionary history and unleash a bunch of primate/lizard hybrids and prehistoric poisonous plants on the near future. It’s (very) loosely based on a brilliant Ray Bradbury short story of the same name. While the movie doesn’t come close to touching Bradbury’s haunting, cautionary tale, it certainly is a hoot.

A Sound of Thunder is a terrible movie, but there were some interesting ideas sprinkled throughout. It’s an awful time-travel movie, but it does fit the theme. It begins with a Time Safari hunting expedition stalking an Allosaurus in the Cretaceous period. Sir Ben’s bleached hair aside, the fact that they were hunting an animal that was already extinct by the Cretaceous should have signaled me to change the channel, but I was a glutton for punishment that day.

The movie begins with the hunt. The characters move along an invisible trail, so as not to disturb anything in the past. However, one of the hunters panics and strays off the path for a moment. When the characters return, they notice some strange plants growing all over their future city. Then something called a time wave hits the city and there are more plants. And then another wave hits and there are baboon/Velociraptor hybrids attacking people in the streets. Clearly, someone mucked with time during the expedition. So chief scientist/game hunter Edward Burns and company decide to track down just what they changed and go back in time in an attempt to get back what they’d lost. Again, it fits the theme, but it makes for a pretty shitty Thanksgiving movie.

This past Saturday was the 50th anniversary of Doctor Who. The special was simulcast around the world and featured a story that touched on a lost part of the Doctor’s history. The Doctor is the last of his race, the Time Lords of Gallifrey. Doctor Who originally ran from 1963-1989. It briefly returned as a TV movie in 1996 and as a regular series again nine years later. When Doctor Who returned in 2005, showrunner Russell T. Davies left a gap between the TV movie and the new series. It gave the show some breathing room and a fresh start. He also added an in-story reason for the jump – the Time War.

When talking about the Time War, the Doctor revealed very little about the details. The only thing he says is that his home, Gallifrey, and his enemies, the Daleks, burned – and that he was the one that set them all ablaze. It’s a choice that’s haunted the three incarnations of the character (Christopher Eccleston, David Tennant and Matt Smith) since the series’ return. The 50th anniversary special, The Day of the Doctor, finally reveals just what happened between the classic incarnation and the current. 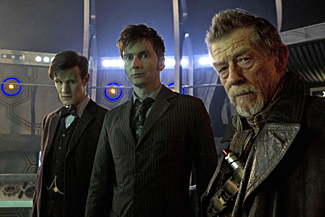 In the episode, both David Tennant and Matt Smith’s Doctors meet an as-of-yet unrevealed version of the Doctor in actor John Hurt. Credited as the War Doctor, Hurt was the one responsible for ending the war and saving the rest of existence. Ultimately, the story was about Tennant, Smith and even Hurt coming to terms with the atrocities they committed. Fans have been speculating about it since the series returned in 2005, and this special showed the audience just what happened between the end of Doctor Who’s original run (and TV movie) and the resurrected TV series. At first, the Doctors want to make peace with their past, but as the celebration of a show about time travel comes to an end, they realize there’s a chance to make things right – and they take it.

Time-travel stories often reflect the wants of their protagonists. The Doctor misses his home. Edward Burns wants to restore the world he sarcastically put down. Me? I am thankful for what I have. I don’t need a time machine. Well, maybe I’d go back in time and convince David Tennant to stick around for one more season of Doctor Who. Maybe.

Ian wasn’t kidding. He’d totally go back in time and convince David Tennant to stick around for another season of Doctor Who. Harass him about it on Twitter @IanGonzales.

A Sound of Thunder, Day of the Doctor, Doctor Who, Thanksgiving