As “Villains Month” rolls on over at the DCU, major titles are taken over by the bad guys who inhabit them. The Joker and Batman go together like peanut butter and jelly, so it was only inevitable that the Clown Prince of Crime would take center stage in this book. What Kubert gives us is a wacky tale of the Joker’s antics that is also interspliced with moments from his childhood (which, for me, derail the comic).

Andy Kubert clearly “gets” the Joker. The story he writes is definitely one worthy of the Joker’s antics, and even at its craziest it’s still believable in the context of the character. It’s also too good to give away, so I’ll just encourage you to go out and read it because it will make your head spin. 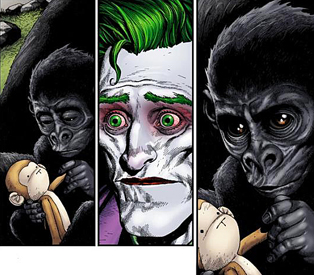 The other parts of the issue go into the Joker’s past, and we see him as a child. My issue with this is that his past is exactly what we’d expect. Kubert plays with the stereotype of an abused child but doesn’t add anything new to it. If anything, his origin humanizes the Joker. While we don’t understand all of his motivations, we at least can see why he may act the way he acts.

This lessens the narrative distance needed to make the Joker the classic villain he is. To be fair, the story still works very well, even with this new window into Joker’s life. Kubert offsets Joker’s terrible childhood with his crazy attempts to be a father (again, you have to read this comic). The final moments are some of the most ironic I’ve ever read (and definitely not what I saw coming), so even given my own critiques, I’d still say the story is great.

The one definitive about this issue? The art. Andy Clarke’s art is gorgeous, no question about it. He changes his style for the past and the present, employing a skewed visual to go along with the Joker’s past and a phenomenally detailed style for the present. His Joker is deranged-looking, and emotions are viscerally portrayed. The comic has a montage of the Joker raising his adopted child, and here is where Clarke does his best work. The final image of the Joker’s psychotic grin is terrifying.

Blond also deserves the credit for this. His colors are superb in every page of the comic. Hopefully, these two work together again because what they put out is some of the best art I’ve ever seen.

I’m torn about Batman #23.1. Andy Kubert delivers one of the best Joker stories ever written, but at times, he delves into the Joker’s past and gives him a stereotypical beginning that lessens the evil he conveys. Maybe this is my own personal tic, but a villain is scarier when he does things without motivation. The parts of the story that focus on the Joker in the present really convey this. The other parts? Not so much.

Still, this is one hell of a ride to be a part of. 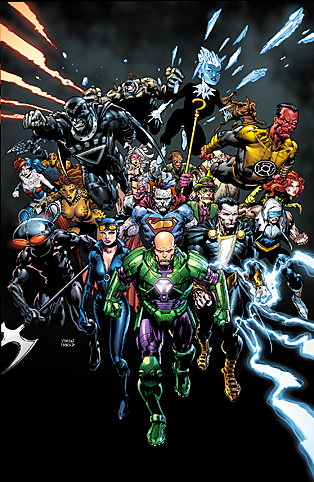 What happens when the bad guys take over the world? They talk.

That’s not to say that I didn’t enjoy Forever Evil #1, but it really didn’t have the impact I thought it would. All the villains in the world are now free to run amok, and they spend their time committing small crimes. Granted, Johns is trying to establish his new world order, and he does so successfully. It’s clear that the heroes are gone. The only ones who remain are terrified to be seen in public by the end of the comic – and not because they fear death. Instead, Johns gives them something more to fear, and it’s a fear that every costumed vigilante has.

But the comic isn’t as grand in scope as it should be. The villains of the DC universe have taken total control, but they’re really relegated to exposition in this issue. This is also Johns’ M.O. He gets the background out of the way so that he can let the story run free.

The one thing that works very well is Johns’ story of Lex Luthor. Luthor is a cold-blooded murderer – every comic fan knows that. But Luthor is also very intelligent, and it’s clear he finds flaws in a villain-run world. Luthor is an interesting person to whom Johns’ latches the story, because he looks unnerved by what’s occurring. And if Lex Luthor is scared, everyone else should be terrified.

Forever Evil also showcases some of David Finch’s best work. I’m not a big fan of his facial features, but he really knocks the rest of the art out of the park in this issue. His close-ups are sharp and detailed, and the rest of his styling is as polished. One four-page spread in particular is a work of art, and the comic is better for having Finch draw it.

What I want to see more of is the villains being villains. They control the world; now they need to act on it. Plus, where are the heroes? Who will stop the villains? What’s going to happen to one particular hero who was unmasked? Johns has a lot he needs to address, so hopefully the next issue picks up and he delivers on his promise to make this truly a very dark moment in DC’s history. 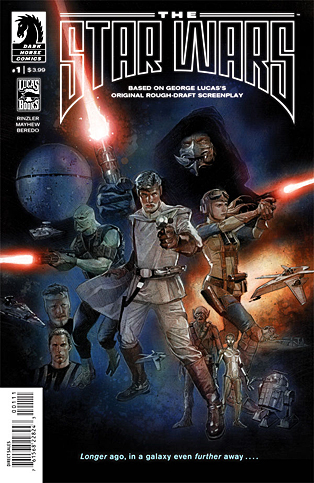 Bannen’s Book of the Week: Adapted from the original rough draft screenplay, The Star Wars depicts Lucas’ original vision for the galaxy far, far away, and the many heroic and villainous people who inhabit it. One cannot ignore the story in its larger context, so I can’t honestly say I was able to look at this comic with an objective eye. Like many other people, I love Star Wars. It defined my childhood. So when Dark Horse announced their plans to adapt Lucas’ original story, I was immediately on board.

Even with its storied past, The Star Wars appears to be its own animal. The book establishes itself well, delivering a solid opening that, while glimmering with recognizable elements, still feels wholly unique and in a world of its own.

That said, J.W. Rinzler is a bit jerky with the story. Some moments transition well; others jump too quickly and without any connectivity. The ending in particular is a bit of a hand in the face. But where the prequels were a stutter step of thatched-together incidents, this story is cleaner and more composed. What’s evident is how much more there is to tell, and Rinzler peppers the comic with foreshadowing, mystery and solid character development.

Credit is also due for Mike Mayhew, who channels his inner Alex Ross to depict Lucas’ world in glorious, photorealistic panels. Darth Vader doesn’t have the booming score of John Williams to usher him into the scene, but his appearance in The Star Wars is powerful, if brief. Mayhew also shies away from the glossy, super-slick stylings found in the computer-generated world of Episodes I, II and III. Instead, while he still tries to convey the opulence and grandeur of the Empire, he does so with sleekness and focuses on how polished everything looks.

Rain Beredo provides the colors to make this occur. Images come to life through his work. The sharpness with which he delivers the imagery is what helps give it a film-like quality, so that while we’re not directly witnessing the action in real time, the moment-to-moment timing is well conveyed.

Rinzler has only revealed a small corner of Lucas’ universe, but what he’s shown has me excited for more. The Star Wars brings a newness and a freshness to an already established concept, and it does so with confidence. What’s been most fun is seeing how Lucas’ story eventually evolved into what it became, and for super fans (this reviewer included), this is like being brought into the creative process for the first trilogy.

I highly recommend reading this comic, even for non-Star Wars fans. Even though it’s a bit shaky in its debut, The Star Wars establishes itself as a solid science fiction story of good versus evil, and I can’t wait to see what remains to be told.