The blood-curdling screams can be heard and remembered from your first moment of awareness. It’s in your face constantly, but can easily be ignored. Then one day you realize it’s taken you over like the alien(s) in The Thing or Invasion of the Body Snatchers. The creature’s neon claws are constantly digging deeper and deeper into your guts, and that awful feeling of fear is deep.

It’s the horrifying truth of facing the stages of life.

It’s been a weird year for me. As much as I’ve tried to stay on one path it’s time to take a turn on the road that actually goes somewhere. Professionally, personally, and internally things are changing for me, and at this point I’m ready to move forward. As a fun project for Fear Week I’ve decided to throw together a list of spooky movies that I feel appropriately correspond to some of those key things in adulthood and life, and the fear that goes along with them. 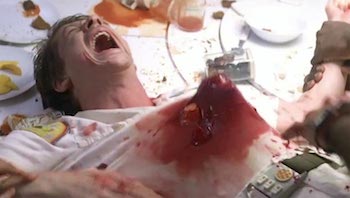 Birth: I think no horror movie better makes reproduction terrifying quite like Alien. As recently reported in The Telegraph, British censors were apparently so taken aback by the perverse portrayal of reproduction of the film (and the Alien’s apparent sexiness?) that they gave the movie an 18 rating, the British equivalent of an X rating. It’s played out over the next three films more bluntly, but the first film still manages to shock and scare when John Hurt all of a sudden doesn’t feel well at the mess hall table.

Children:  So many creepy kid horror movies. While children are our future, in horror movies they can also be the end of us. For me no scene in a movie better sums up the sheer terror of children than the opening scene in Children of the Corn from 1984. I barely remember the rest of the film after those children brutally murder those adults in the diner.

I’m going to skip the teen years since that’s the bread and butter of horror films and there are thousands of them.

Education: Dario Argento’s 1977 classic Suspiria is all kinds of crazy. It’s an atmospheric and creepy tale of a girl attending a ballet school in Germany. Oh, and that school turns out to be run by a coven of witches. Awesome score, utterly bizarre and packed with scenes that will stick with you forever, Suspiria really captures the fear of adults (and witches).

Employment:  The 2006 British-German film Severance is a great flick to throw on after a shitty day at work. It tells the tale of an office retreat gone horribly wrong in the wilderness of Hungary, as members of the retreat start dropping like flies in all sorts of brutal ways at the hands of Russian speaking murderers.  Not for the faint of heart.

Unemployment: A topic I know all too well, paired with a movie that I can watch over and over again. They Live, John Carpenter’s allegorical 1988 masterpiece about a drifter played by Roddy Piper who rolls into town looking for work and stumbles upon a resistance group among the homeless and unemployed who share a big secret. The government, the people running the TV stations, advertisers, the rich, they’re all aliens trying to take over our planet by mind controlling the masses. There’s also a ten minute fight scene between Piper and Keith David in the middle of the movie, so, awesome. 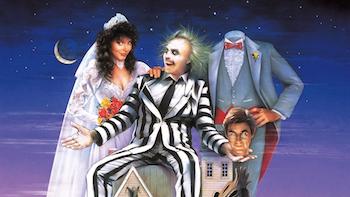 Addiction: Two Dracula movies, the great 1957 Hammer Studios film Horror of Dracula and the somewhat ridiculous Andy Warhol produced Blood for Dracula from 1974 both tackle addiction head on. Christopher Lee would play the main vampire many more times in his long and illustrious career but Horror was his first and possibly most memorable. It would also be the first time where vampirism is laid out as being similar to drug addiction by Peter Cushing’s Van Helsing. In Blood for Dracula it’s pretty obvious that the sickly thin Dracula is jonesin’ for a fix, as he spends most of the film either curled up in a ball or openly lusting after pure virgin blood.

Sex: Any werewolf film, but here I guess it’s appropriate to mirror Alien with the 1995 film Species. It’s ridiculous as all get out but it doesn’t sugarcoat the underlying theme at all, as anyone who has sex with the alien played by Natasha Henstridge is killed in a pretty brutal manner. For a creature who’s trying to populate the planet with her alien offspring she doesn’t do the greatest job.

Marriage: There are a number of horror movies that tackle this subject, some with humor and some that will put the fear of everything into you. Takashi Miike’s 1999 film Audition is the latter. The movie is about a widower who decides to date again, and at the urging of friends puts on an audition for a new wife. The woman whom he ultimately falls for paralyzes him with a drug and tortures him, and it’s pretty rough stuff. (As a safer alternative go with Beetlejuice for a funny and spooky tackling of marriage and the afterlife.)

Parenthood: I’ll go with another light one for this. Well, Peter Jackson’s 1992 zombie romp Dead Alive is as disgusting as it is hilarious. For the first half of the movie, the protagonist has to hide an ever-growing zombie brood in his basement. There are a number of scenes of him feeding and chastising his undead children, culminating in an unforgettable scene of physical comedy in which he takes the zombie baby of two of the basement ghouls for a carriage stroll in the park. Again, not for the faint of heart, and especially not for those who are easily grossed out. 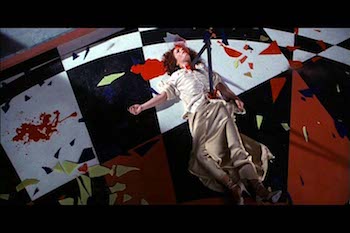 Old Age: There really is no better senior citizen horror movie comedy than Bubba Ho-Tep from 2002. Bruce Campbell is amazing as an elderly man living in a nursing home who may or may not be Elvis Presley. Residents start dying at the hands of a mummy and it’s up to Presley and JFK (played by Ossie Davis) to stop the ancient terror. What I found to be clever and kind of terrifying about this premise is that a mummy is actually a threat to people who can’t get around well on their own.

Death: Or, the fear of death. Really most vampire movies will do, but I’ve always liked Cronos, Guillermo Del Toro’s first film from 1993. It tells the tale of an elderly man who discovers a device that gives him eternal life, but also a thirst for human blood. He is being pursued by a wealthy and dying man who wants the eternal life giving properties of the device for himself. The sympathy that you feel for the main character (played by Federico Lupi) as he slowly changes into this inhuman immortal creature against his will is conveyed so well, and more potent than many other vampire movies.

I’m sure I’m missing something in there, but like horror movies themselves it’s always good to leave room for a sequel. Where I’m at in my life right now I’d like to think that the next sequel in the ongoing saga is about to begin. The big difference from a horror movie franchise is that there’s a good chance that my next sequel is going to be way better than the last.