I’ve spent my life trying to work out if being born on Halloween into a religious family is anywhere near as interesting as I have at times perceived it to be. There’s a clichéd iconoclasm to it, and for as long as I can recall I’ve deployed the information as if it were the punch line to a highly-condensed, low-budget Rosemary’s Baby rip-off. It’s entirely reasonable, sensible even, to assume that’s all that the paradox amounts to – something to break the ice at parties.

The reality is that it engendered a somewhat binary worldview, a dualistic perspective of Christianity and Paganism, which came to absolutely underline, and at times dictate, the main currents in my life. You’ll probably write that off as quickly as you read it. It seems preposterous, superstitious even, to suggest that there could possibly be any level of potency attributable to being born on Halloween beyond festive coincidence. This represents my most concerted attempt to overcome this skepticism and illustrate the significance of being born when I was.

… my fear of spending eternity in incomprehensible torment became my primary fixation for a decade, reaching an apex in the form of literal choking panic.

I should stress that the confession of these hitherto private anxieties masks the fact that I was for the most part very happy growing up. I had my troubles, like everyone, but my parents loved me. I was blessed with good company and was brought up in a faith that has come to be the wellspring of all the important elements in my life, and these are qualities not many people can take for granted.

I don’t write this to make a point. It’s a story is all, but it’s a true one.

I didn’t need the manufactured spectacle of Halloween to sense that there was something other and different about being born on October 31st. The season’s visual natural qualities served as a rudimentary calendar to indicate that my birthday was near, and I quickly came to associate its various elemental patterns with positive personal experience. The smoky atmosphere, the delicious crunch of leaves underfoot, the quality of twilight against the warm colors: all were signs that reliably good things were going to happen. Older people would bemoan the clocks going back and the onset of early, cold evenings but I would sit inside and feel contented as I watched the nights become wilder. It didn’t take long before I felt a sort of primal attachment to the occasion that exceeded mere gifts and attention. The fact that other people didn’t seem to care as much about that time of year only enforced the specialness of it all. 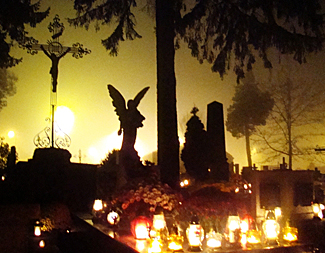 You see, being born on Halloween in the UK didn’t really mean that much as of itself. It’s an event (although perhaps event is too generous a term) that merits sufficient deference for people to be aware of it all, including a fringe element who really invest in the whole idea, but most people mark its passing with a sort of benign neglect. Given that it’s a holiday, it garners attention from traders, offering them the chance to market new products on the basis that they can append the word “spooky” to whatever they’re selling. But that’s about all the energy that goes into such endeavors. All in all, it’s a bit of a damp squib, especially when compared to the effort invested in the pageantry of pumpkins, costumes and candy in the U.S. As a kid I would often hear grownups scornfully natter about how American it all was.

That was the other reason it appealed to me. There was nothing better than America. I had some American friends and they were the best people I knew. They ate some heavenly goo called frosting out of a can, their clothes were better, they seemed physically older and impressive even though they were younger, they had a better car – everything they did or had was somehow more plentiful and novel than anything I owned.

It followed of course that Halloween’s Yankee cousin was also bigger and better, generous and comprehensive and friendly in it spookiness. From the age of seven I quickly discovered that there were certain products from overseas that seemed to have been cultivated around this cheerful Haunted House aesthetic, and I became a self-designed poster boy for it all. My favorite cartoon was Tales from the Crypt Keeper, I bought every Goosebumps book on release (even the terrible ‘choose your own adventure’ ones) and I would spend hours calculating when income was due from relatives so that I could spend it on Monster in My Pocket or a gruesome Mighty Max head. The date of my birth instilled an essentially totemic relevance to this schlocky horror collection that I quickly amassed. Inasmuch as I could, I sought to stitch the seams between myself and Halloween wherever possible. It was, at this stage of my life, unquestionably the single thing that mattered to me most.

In spite of its sputtering British guise, Halloween was still deemed sufficiently pagan to warrant objection in the church where my father was the minister. We were told instead to think of the 31st October as Reformation Day, as on that date in 1517 Martin Luther nailed his proclamations to the cathedral door in Wittemburg and started the religious moment that was so important to the traditions of the proudly Protestant church I attended. We could carve turnip lanterns if we wanted to, but not on the day itself, as if that would have tied us into some form of Faustian Pact through association. We didn’t answer the door to trick-or-treaters. 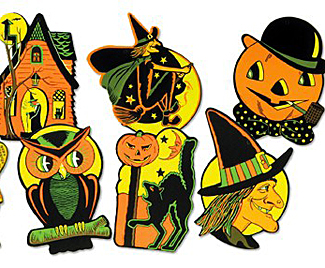 I was simultaneously enraptured and terrified by this set of unofficial sanctions, bound as I was to the date that had incurred them. Their necessity spoke of Halloween’s significance, while also insinuating a distant menace that would initially thrill but quickly become overpowering if I thought about it for too long.

This was the other side to it, away from the more rounded novelty of it all encapsulated in my affection for skeletons and jack-o’-lanterns. I wasn’t really frightened by any of the subject matter, as it were, being well acquainted with it. But as I got older I felt as though I began to detect something hidden about Halloween, as though I had been born next to a Pandora’s Box and the urge to open it became more appealing and more damaging as it collided with various other coming-of-age experiences.

It was the incongruity of the brief season that served to spur my curiosity further, and the essential pointlessness was mesmerizing. It wasn’t like being born on Christmas, where most people agree with and celebrate the event and generally understand the deal. Essentially nobody knew what Halloween was about or why they were doing it (in fact, most people didn’t do it).

I came to see the occasional and scattered paraphernalia of the holiday as a code for something Other, and I would ask everyone I held in any regard what they thought about it all. Their comparative noncommittal seemed to hint at something conspiratorial. Apparently, no one really seemed to know why or care, but it all reliably came to pass each year nonetheless. It was as though Halloween was the threshold of something significant or horrible that everyone else had conspired to keep secret through making the whole thing as mundane as they possibly could. Thus the essential second-rate quality of a British Halloween pushed me towards occult leanings in a way that the most lurid comic book or cartoon could never have managed. It increasingly seemed as though mystery was my birthright.

My interest in horror started to move away from the cheerful, Grimm’s allegorical sort and into darker waters. I was reading about reported ghost stories and legends that seemed far more real. Subsequently, my active imagination, which had so animated my love of Happy Halloween Adventures, became a tortuous anxiety projector of the new horrors I was unearthing.

After reading one particular account of the Amityville Horror, I was convinced that if I stared at an object or place too long during the night I would glimpse something spectral in it. Sometimes I would go down to church on my own to use my dad’s PC for homework or gaming, and every time I left I would sprint down the stairs to the front door in terror, convinced that something was following me down the corridor. I became obsessed with the concept of black dogs and ravens and other portents. Graveyards suddenly scared me. I felt increasingly doom-laden. 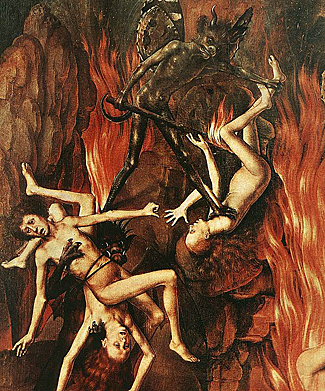 I looked to the Bible for spiritual reinforcement against these terrors. But the same curiosity and fascination for the mysterious and supernatural that pushed me towards my fears steered me past the plentiful passages of love, and liberation, and acceptance, and forgiveness, and comfort. Instead I ended up pretty much every time at Hell and Judgment. The Bible spoke plentifully of contrasts – Good and Evil, Sheep and Goats, Left and Right – and this was terminology that was very familiar to me. I had gleefully identified with the strange, the eccentric and the Other over the orthodox or established, and as far as I could see there was no way of arguing my way out of what that meant in an eschatological context. I was bound for damnation.

It was of course too theologically facile to suggest that being born on Halloween had predetermined this fact. But in the same way that my birth date had marked me out as a special child, it was now an ironic reminder of the fact that I was branded for something else. And much as being born on Halloween had been the most important detail of my life then, my fear of spending eternity in incomprehensible torment became my primary fixation for a decade, reaching an apex in the form of literal choking panic.

It’s Halloween next week. It will be my 28th birthday. I suppose I’m looking forward to it, although for the most part I’ve been too busy with work to really notice. I still get excited by the wind rolling through the eaves, and I get a little fantastical tingle when I see my native Edinburgh roiling in the October mists. I still feel uniquely spoken to by it all.

But most of all on my birthday I will reflect on the fact, as I do every day, that I am blessed to know the love of God and friends and family, health and wealth, peace and contentment. And I’ll also mark that I was born on Halloween.

Did I mention that?