Someone screams over TeamSpeak as a metal-plated monster drops down from the bridge on the Armored Shield map. A squad of four friendlies in front of me instantly scatters like cockroaches suddenly spotted in the switched-on kitchen light. The tank quickly acquires them, firing a shell that sends two of the players flying into the air. One engineer is flicked upwards like popcorn in a comical arc that sends him back onto the bridge above us.

I’m up to my arm in water, lying prone on a river bed staring at the front of the tank with three of my squadmates – Pot, Deadeye, and Frost.

“We are incognito,” Pot says. 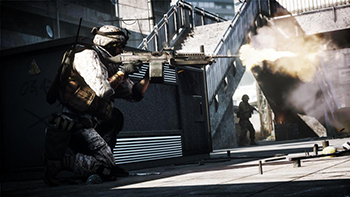 I glance over to the radar sitting on the corner of my screen, praying not to see any more orange arrows, the sign of the enemy.

We’re in the clear for now – we are incognito, as Pot put it – but we don’t have many options. With three medics and myself, a support player, I’m the only one that could possibly take down the tank.

“Okay, guys,” I preface before laying out my suicidal strategy. I tell – no, I order my teammates not to move – don’t shoot, and I’ll sprint toward the heavy bastard’s right flank and blow it out of the water while the turret isn’t facing us. Then the caveat:  if the tank starts moving, I’ll need my squad to shoot it and run in the opposite direction to distract it.

“Well, okay…” I taper off before I click-in my left stick to start running. As I close the distance, the machine gun on top of the tank spins to life, spotting me.

“Oh crap, start shooting, guys, distract the crap out of him,” I yell through my mic. My squad gets up and starts firing, but I’m not in the clear. The gunner knows I’m coming and the tank rushes backwards while its big gun turns its gaze to me. Luckily for me, the enemy drives backwards into rock, locking him in place.

I reach him and dispense my explosives all over the tank like treats. A smirk cuts between my lips before I yell, “Get dunked on, brosef!” and I burst into cackling laughter as I blow the tank and myself up. 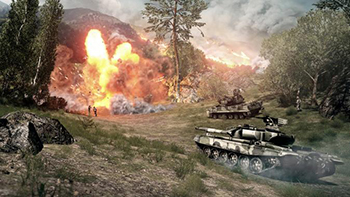 My squad and I laugh for a while, and then I ask if anyone is going to come revive me.

“Where should we spawn Spam?” Deadeye says. (That’s my call sign.)

At this point I realized I had become the squad leader. Leading is something I never wanted or imagined doing.

I had no idea why they were listening to my orders — especially after ones that just got us all killed.

I was far from the highest-leveled player – a distinction held by Pot who was consistently almost double my rank – and in terms of experience I’ve always been an above-average Battlefield player at best. Even before that, I was always a loner in games. All those summertime rounds of sniping across the Highrise map in Modern Warfare 2. The endless virtual miles I drove in Burnout Paradise. Then there’s the fact that I may be one of the few people who actually like soloing in MMOs.

Gaming was always an outlet for me to be alone. For times when I didn’t want to be bothered and times when I did not want to interact with anyone. Battlefield was different. There was no way to really play without running into another teammate trying to help. Every time I ran into somebody they would be throwing down ammo or health even if I didn’t ask or need it. Even in random, public games I developed short-term alliances with players I never met before. If they had a microphone it was even better. A few rounds later and I would have a new Xbox friend and a new comrade for future games. 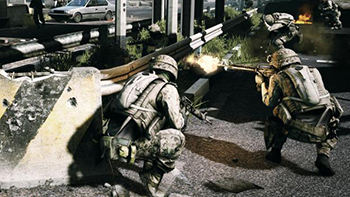 I guessed if there was a reason my squadmates ever listened to me, it was because I knew everything there was to Battlefield. Ask me about any weapon in the game and I could tell you the exact rounds-per-minute of the gun, the attachments you should use and what ranges its recoil was manageable for.

Knowing exactly when to start running into the next section of the map for the following stage of a Rush game. I can tell you every way to break through a spawn camp on any map – especially the death train tunnels on Metro.

Figuring out games was always my expertise, but as the G.I. Joes used to say, “knowing is only half the battle.” The other half was my squad, which I could always rely on. Pot was the best chopper pilot I ever knew, Deadeye was the medic who would always come to revive you, and Frost had better aim than all of us combined. Without my squadmates backing me up, I couldn’t pull off even a quarter of the wins I have under my belt.

Choppers, tanks or a whole enemy team of max level 100 colonels – we always came out on top because I could trust them to do everything I expected and they believed in me enough to lead them. We were never competition-level, but we could always work together as a team to pull off the craziest strategies I could concoct.

Once in a game of Rush on Metro, we cleared out the bathroom area by having everyone run in as support class, dropping as much C4 as they could before they died. I would then throw in a grenade to blow everything (and everyone) up. 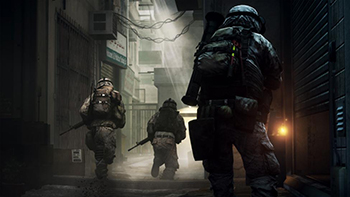 Amusingly, it totally worked. It was hilarious to see three support players run in armed with nothing but little pads of plastic explosives followed by flashes of panicked gunfire.

I chucked an orange ball into the room and a beat later I saw the flames burst out of the bathroom door as my screen rocked from the biggest explosion I ever saw in the game.

Of course there was also friendship, talking about real life in between sudden and loud bursts of “oh my gods” and “get S-Tac’ed” and “get knifed” and “get generally anything-ed.”

With next-generation consoles looming in the near future, our team conversations suddenly became much more entangled in real life.

These questions put the world’s largest knot in my throat. I consoled them with the best advice I could muster, but the entire experience brought the same feelings of crushing responsibility that I first experienced back in that digital riverbed, facing down that bastard tank. Once again I felt this incredible pang of not wanting to be the leader. Don’t look to me for advice or guidance. But I couldn’t run, and I wouldn’t.

God help my 64-player team if I ever become a Battlefield 4 commander.