The Last of Us is the worst and the best of big-story videogames. It validates the artistic claims of the genre with genuine questions on what it means to be human, but the game is unable to truly capitalize on this with its unwillingness to redefine its genre.

It reminds me how much effort I’ve expended defending what I thought was true, when in fact the issue isn’t truth but meaning.

We could spend pages debating the whys and wherefores of all this, but this has all been written (and much better than I could) elsewhere: the disconnect between story and gameplay, the excused violence, the invulnerable non-player characters and inescapable encounters.

Setting that aside, I’m clearing space to look at how The Last of Us functioned in my mind. I want to consider what this whole head-splitting, heartrending mass of a game means to me, and maybe spark some ideas around what it might mean to you.

Life deals us a hand and asks us what price we are willing to pay to deal with it. This premise undoubtedly sits more easily, and entertainingly, for those of us in the comfortable West than in other, more challenging parts of the world. The price I’m called to pay is usually limited to sacrificing my time, money, mental energy or maybe dignity to ensure my loved ones can continue their steady progress into the consumer cycle.

Joel and Ellie pay a price for events beyond their control. This fungal-infected world is not of their choosing, but it is one they must deal with. I may not agree with the route they take but I’m not there and they are. Although in a way I am there – I am Ellie.

While I was playing the game, even controlling Joel, it was Ellie who gave voice to my concerns and expression to the shock of his brutality. Perhaps this is why her slow descent into Joel’s violent response to their situation was so sad. Joel not only paid for their survival with his own dark deeds, but also those he infected Ellie with. 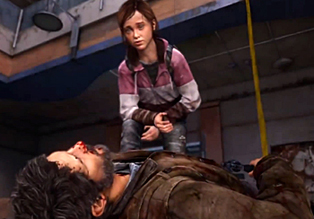 I’m not judging them here. They are both out of control – tumbling through a nightmare not of their making. Like anyone thrust into the foggy terror of the unknown, they survive by any means possible. The deals we make with ourselves and (often unspoken) with those near us are sacrifices we alone must make to find a way to continue living.

Ellie meets her critical decision as winter breaks upon the game. We pick up with her hunting for food and for a time everything else falls away. We are left with movement and landscape and weather and wildlife – an entirely different response to those same pressing demands of survival.

But even here in the wilds, events travel with her. She soon faces the choice of picking up arms or leaving Joel to die without medicine. There is an alternative future conjured here, a potential escape from the craziness to live a life of seclusion and peace. But for all the possibilities it creates, she is unwilling to sacrifice her companion. The shooting continues (and we know it must) but with an added weight and reluctant heaviness for what was lost in its continuance.

It’s not many hours later that the tables are turned. Joel is faced with his own moment of decision: the possibility of a world previously unimaginable, cured of its infection. Like Ellie, he decides against the sacrifice and carries her from the hospital building, doubtless triggering the scent and feel of many shorter journeys of carrying his own daughter to bed before the madness began.

These two decisions against sacrifice seem identical, but are in fact very different. While Ellie chooses to emulate her protector and perpetuate his route to survival, by contrast Joel chooses a different path than the one he was already on.

From his murderous sacrifice of common humanity, a way to survive the harsh fungal earth imposed upon them, his choice instead creates a future where one life is worth saving. Upsetting the hard mathematics of his survival, he recognizes that this is not the last of Ellie in that hospital bed, nor perhaps the last of him blazing gunfire in its clinical halls. 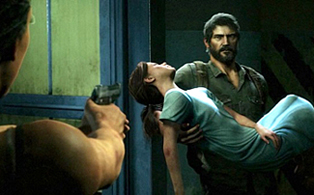 The lie he tells to explain their escape contains protection for Ellie, creates an entirely new possible future for her. This transforms Joel, too, from the imposed sacrifice of his humanity for survival into a sacrifice he has chosen for himself. Even with his gruff bravado, incisive leadership and brutal takedowns, this is the moment when Joel really takes control.

It reminds me how much effort I’ve expended defending what I thought was true, when in fact the issue isn’t truth but meaning. Unlike Ellie, Joel finds the imagination to make sense of his world in ways previously unavailable.

This is not playing fast and loose with civilization’s last chance of a cure but the unique ability of a father to create a world in which his children can live. If that’s a lie, I’d choose it over the truth any day of the week.

Ellie, Joel, PlayStation, The Last of Us

Not Everything is For Me, and That’s Okay
Previous Post