The beginning of Fallout 3 marks your birth, an oft-ignored period in games. And for good reason: there is little that is less predictable than a newborn baby.

The limited range of movement you are allowed – look at all these other buttons! I wonder what they do? – is kind of like a brief history of game controllers. You begin with a big, blocky, undifferentiated controller that has only a single joystick, or a knob, or one giant button; you move on to the awkward age where you have more buttons than you know what to do with, and none of them seem to fulfill their intended effect; and you end with ergonomic curves, something that looks professional and serious, but also comfortable and safe.

How did you get in this vault? How did the world get like this? Do you really have the control over it that you think?

And just like that you are done being a baby. Now you are a youngster; it’s your birthday. There’s a party, and plenty of people, but the real action seems elsewhere, disembodied. Is this really happening? I guess so, because now you’re a young adult, about to take the test that decides your life in the vault. What vault? There is that great scene in Inception where Leo DiCaprio’s Dominick Cobb talks at an outdoor cafe with Ellen Page’s Ariadne about the inability to distinguish dream from reality: “Think about it, Ariadne. How did you get here? Where are you right now?” – how did you get in this vault? How did the world get like this? Do you really have the control over it that you think?

My nana has worn a gold ring on her finger as long as I’ve been able to recall. Its face is a hexagon, and inside of it is a bumblebee that would appear to be perched on the face if it were not flat. When worn on her finger – her left ring finger – the bee is facing her head-on.

This is important, she explains, because she used to be a teacher. The bee, she told me, symbolized a collective, many working together for the betterment of all. When you’re still a teacher, you have the bee face the ends of your fingers, and outwards, a sign that your work is not yet done, that you’ve still got some more of that colony to build. Only when you retire can you take the ring off, turn it around so that it faces you, and put it back on. Now is the time for yourself, for pause, for rest. 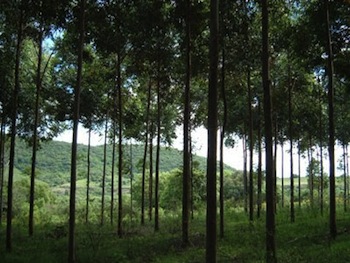 I should mention that this all happened in Uruguay. The fact of the ring, its weight, feel, makeup (it can be silver or gold), and even its existence are a product of that country, and not the U.S. She taught in the U.S., taught bilingual kids, and wore the ring while doing it, but it never had the same amount of pull, never inspired knowing nods or reverent looks. She used to be approached on buses or in public and acknowledged for her service.

Wouldn’t it be a dream if we celebrated people not for killing others, but for helping them?

The etymology of “zombie” comes from West Africa. Its first mention is in the 18th century, with one intriguing divergence being the Kikongo word zumbi, which means “fetish”. Interesting that the dead, emotionless eyes that are now fetishizing zombies are, in fact, ours.

In games you always have to wake up for the quest to begin. It’s the worst in RPGs, where a reverse-fade shot of our protagonist waking up in some sort of bed is just as common as the “save the world and fall in love” trope. It seems our game worlds are still insecure enough that everything in them is still heaped on the player, like an elaborate music box that has to be cranked and coaxed before it comes to life.

In Toy Story, the dream is that this world exists that we can never grasp, because we literally cannot get a hold on it – it only exists when we don’t. We might happen upon it at some point, but the misdirection is immaculate: What’s that toy doing there? Did the dog get into the toy chest again? Why can’t Steven keep his room clean? I thought Clarissa loved that toy?

For our game worlds to grow, they’re going to have to start acting like they can survive without their players. 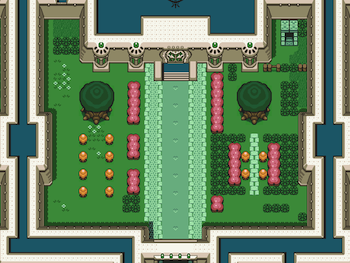 You wake up. You are a normal boy. But today, things change. Spirits begin to communicate with you. Your village elders speak in strange prophesies that sound like platitudes. You are thrust out, asked to rescue a girl you hardly know yet can’t stop thinking about. But why her? You find fascinating items, visit exotic locales filled with unbelievable characters. You get more powerful, and sense it. You encounter some fabric of the world previously unrecognized and exploit it, a necessary concession. You find the evil, defeat it. You get the girl, who’s now a princess, and also powerful. You can ride on your horse, go fishing, kick chickens in peace.

Who could ask for a better dream?

I have visited Uruguay twice, once when I was very young and a second time when I was in middle school. I remember this because my pants were far too baggy and I wore a brown Rolling Stones T-shirt. I regret not really being able to speak Spanish at the time (though I still can’t), and also being in that awkward teenage phase where I was very narrow-minded with people who “didn’t get me,” and as a result missed out on a lot of great experiences.

Nonetheless, the moment on that trip that resonates most strongly is when we were visiting the beach of Punta Del Este, a resort town on the coast. Most interesting about the town is that it is nestled between the Río de la Plata (River Plate) – an estuary of the Uruguay and Parana Rivers – and the Atlantic Ocean. This means that, amongst its many beaches, some enjoy calm, predictable waves, while others are ravaged by wild tides and sneaky backcurrents.

This inconsistency is noted most strikingly by a sculpture on one of the beaches. Titled La mano, which translates to “the hand,” the sculpture is known by two other names that seem to run in opposite directions: Man Emerging into Life and Monument to the Drowned. 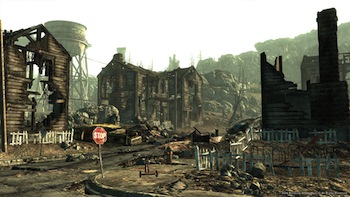 Like most things, how you perceive La mano – as a hand triumphantly breaking through the sand, representative of the endless bounds of human will; or as the last shuddering glimpse of hope before those fingers disappear beneath the sand, or the sea – is bound by context. Its resilience and popularity rest upon peoples’ inability to track it down, to define it concretely. Like the waves La mano seems to be struggling against, it keeps on coming, but never in the same way.

On your quest through Fallout 3, you will be presented with choices, more than you can know what to do with. Most you won’t be able to solve because you won’t have the necessary skills, because you decided Lockpicking was more important than Science, or that being able to shoot that cool laser was more interesting than being able to converse with other people. In other words, you will be presented with a multitude of choices, but are forced to condense them down into one actual path of what you did.

Which means, of course, that you will restart. What was in that footlocker? What did that terminal in that vault really contain? What did that ghoul mean when he mentioned a secret city? You will start again to explore these new paths, but you’ll have to take the familiar ones to get there, and you’ll get brief glimpses of prior lives you lived, but which will now seem disjointed, unreal, dreamlike by comparison.

Also unreal and dreamlike is the soundtrack, which contains a bevy of songs which oh-so coyly weave apocalyptic imagery into their popular tunes. “Butcher Pete,” “Civilization,” “I Don’t Want to Set the World on Fire,” even the softer tracks like “Way Back Home” and “Anything Goes,” with all the big-band sounds and American Songbook cadences which seem to suggest naivete and nostalgia, instead evoke unsettling moments of dread, of dissonance. 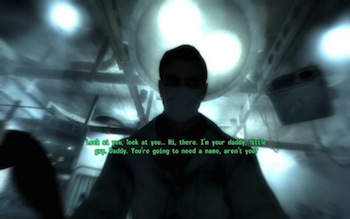 But do they really? They’re still enjoyable songs, catchy songs, pop songs by design. Just because they’ve been made to fit their new apocalyptic setting, and are imbued with power through the irony they represent, does this not mean they can still retain some of their original wit, brilliance, and pure joy?

“I am the Alpha and Omega, the beginning and the end,” your dad, voiced silkily by Liam Neeson, waxes while you’re barely able to crawl to him. “It was your mother’s favorite passage,” he says, simultaneously lending the words both pathos and bathos. “I will give unto him that is at thirst the fountain of the water of life freely.” The lilts and cadences of the lines, the double preposition ‘of’ that extends the preciousness of the fountain, they work to create an ebb-and-flow pattern, kind of like a wave. A high point and a low point, a discernible beginning and end. Only the pattern repeats, and again, and once more, and again, and you can’t be sure if that ending you just watched was an ending or, in fact, another beginning.