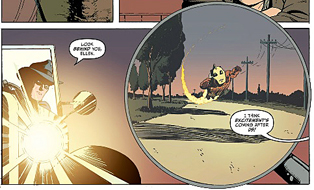 After seeing the Rocketeer unofficially meet characters from The Shadow, Doc Savage, The Thin Man and other classics, reading Cliff officially meet a character like the Spirit is cause for celebration. Mark Waid, Paul Smith and Jordie Bellaire pull Denny Colt and Cliff Secord’s first meeting off without a hitch. The first issue sets up the crossover briskly as Denny and Cliff’s 1941 coalesce. On the eve of television’s birth, a Central City’s Councilman Cunningham argues against private companies being awarded stewardship over public airwaves. Eight hours later, the councilman’s dead body is found across the country in Los Angeles, California. And so begins the mystery that brings the Spirit and the Rocketeer together.

Artwise, this issue feels a lot more like a Rocketeer comic than it does a Spirit comic. Smith’s artwork and Bellaire’s colors are reminiscent of Dave Stevens’ Rocketeer comics without imitating them. However, the Spirit, Commissioner Dolan and Ellen Dolan are pure Will Eisner. Smith’s storytelling in the issue is seamless. During the casts’ first meeting, Smith cuts between Rocketeer and Spirit’s aerial fistfight and the Dolans’ first meeting with Peev with pitch-perfect pacing.

The Rocketeer/The Spirit: Pulp Friction # 1 is a gorgeous homage to two of comics greatest masters. While it looks like Smith isn’t on for the second issue (Previews cites that Loston Wallace is drawing it), this first issue sets up a helluva story. 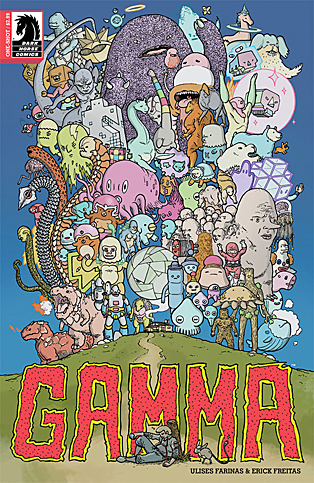 Gamma collects the short stories that originally appeared in the anthology series, Dark Horse Presents. It’s the story of Dusty Keztchemal, the most pathetic coward on Earth. He failed the people and the only way the sap can make a living is by getting continually punched in the face for money. One day, a beautiful woman rushes into Dusty’s bar and pleads for help. Dusty, once the foremost monster trainer in the world, decides to give it a go and be the man he once was.

If that’s not one of the craziest and awesome pitches for a comic, I don’t know what is. Gamma is a send-up of ’90s nostalgia. Nothing, not Pokémon, not Power Rangers, heck, even Legos are safe from Ulises Farinas and his co-writer, Erick Freitas. The book opens with Dusty sitting on a barstool, and a guy who looks like he could be Dum Dum Dugan’s brother pays the bartender fifty bucks to punch Dusty square in the face. It would be disturbing if Farinas’ pacing and style weren’t so damn perfect.

As the story progresses, Dusty’s story is told through flashbacks. Gone is the face thick with bruises and contusions from nightly pummeling. Instead, we see a younger, sleeker Dusty and his Thunder Jerboa, Sparky. Dusty Keztchemal was a monster trainer at the peak of his celebrity when the world began to suffer from monster overpopulation. For five years, Dusty led a group of men, women and trained monsters against a horde of wild beasts.

The panels of this comic are filled with gems. I’m particularly fond of the aforementioned Dum Dum Dugan bit, as well as a Snorlax gag a few pages later. Thing is, Dusty is a pretty shallow character. He’s not terribly likeable, and Farinas and Freitas use that to abuse the hell out of him while inverting a redemption story.

What starts as a riff on Pokémon slides right into Power Rangers satire, complete with costumes and giant, boxy robots. Gamma is a damn funny comic that lampoons weekday afternoon melodrama with aplomb. Dusty’s fall from celebrity to the shame of the Earth makes for some fun reading. It’s really solid stuff, and I can’t wait to see what else these two gentlemen have in store for us. 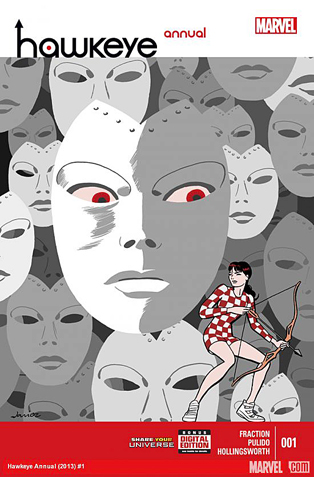 Kate Bishop is a firecracker. Hawkeye Annual #1 picks up where Hawkeye #11, the Eisner Award shoe-in Pizza Dog issue, leaves off. Kate is tired of the mess Clint is making of his life and decides to walk out. She takes her bow, quiver, some of Clint’s exploding arrows and Pizza Dog with her to Los Angeles. Why Los Angeles? Well, Kate is on a journey of self discovery.

This is Kate’s first solo adventure in the series. Matt Fraction, Javier Pulido and Matt Hollingsworth follow up the events of “The Tape,” where Kate took Madame Masques place during an underworld auction. Since this is Kate’s first step on her journey of self discovery, of course everything goes wrong. Her entire life is turned upside down. Naturally, Madame Masque wants revenge, so she sets out to make Kate’s move to the City of Angels a living hell.

Fraction and Pulido spend a good portion of the issue with Kate and Madame Masque’s alter ego, Whitney Frost, playing a game of cat and mouse – first at a posh hotel and then at Frost’s mansion in what appears to be the Hollywood Hills. The entire issue has a Love and Rockets meets Rockford Files vibe from the get-go. Pulido’s Whitney Frost looks like she could be menacing Maggie or Luba just as well as Kate, whereas Kate feels like a feisty Jim Rockford. I know it sounds weird, but it works!

This issue sets up the new status quo for the Hawkeye ongoing. From here on out, the issues will be alternating between Clint’s disintegrating life in New York and Kate’s adventures in Los Angeles. Fraction and Pulido leave Kate in a place that, from what I’ve read of Mr. Fraction’s work, will leave him with plenty of great stories to tell with incoming artist Annie Wu. As always, this issue left me wanting more Hawkeye.