Kelly Roman is an artist and woodblock printer – one half of the creative force (along with illustrator Michael DeWeese) behind The Art of War, a graphic novel that adapts Sun Tzu’s seminal military text into a story about a near-future, militarized United States struggling in a world dominated by China. Unwinnable sat down to chat with Roman about the project, being a comic artist, horror movies and more…

Unwinnable: What was your early exposure to comics?

Kelly Roman: I read The Coffin by Phil Hester & Huddleston in 2005. I don’t know if you’re familiar with it, but it’s actually a really good black and white book – high contrast. I had been shooting some short films and experimental horror stuff and was following the film business when I had read that the Spanish director who did Pan’s Labyrinth –

K.R.: Yes, del Toro got the rights to The Coffin. I remember thinking “Well, if he bought the rights to it, it’s probably interesting.” And that was the first graphic novel I read. I had been drawing and doing woodblock printmaking for years but was never interested in comics. I loved the woodblock/printmaking aesthetic. And that’s kind of what drew me to The Coffin, because it almost looks like woodblock even though it’s drawn and inked. It just hit me: “I really want to do this.” So I just started to figure out, “What am I going to do first?” And part of it was a business decision where I thought, “Maybe I can adapt something that has an audience already but hasn’t been done into a comic book before.” So I started looking into public domain texts, and The Art of War was extremely popular and had never been turned into a graphic novel. Even though there is a comic book version of it that came out earlier this year, it’s not a narrative. It’s more like an illustrated version of the first thirty pages; it’s not a graphic novel. And The Art of War was timely. I had been watching the rise of China as an economic power, and I felt like it was a perfect time to adapt it and to set it in a modern context.

Unwinnable: And that’s when you found your illustrator?

K.R.: I met Mike [DeWeese], the illustrator, at the time I conceived it [The Art of War]. Mike was at the North Carolina School of the Arts in the screenwriting/filmmaking program and was this brilliant storyboard artist. He had never done a comic book before but when I saw the storyboards I could tell he had a strong black and white aesthetic. And so I asked him, “Do you want to work on this with me?” So that’s kind of the genesis of it.

Unwinnable: In the Internet previews you and Michael seem to work very well together. He seems really receptive to a lot of what you tell him. Were there ever moments of tension between the two of you?

K.R.: Sure! Actually, it wasn’t the really big, creative concepts we disagreed about – it was the little details. I’m just so detail-oriented. I’ve made thousands of tiny little tweaks to the book over the last two years. But at the end of the day, he would say, “Kelly, I’m really glad we did that because the book looks so much better.” When you look at a book like Watchmen and the meticulousness of the illustrations – that’s what we were going for. Whether or not we think the art is better or worse, it’s fair to say we put in the same amount of hours they did into that book. 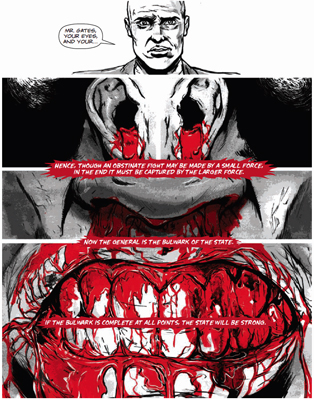 Unwinnable: Why did you decide to write this and then hire someone else to draw it?

K.R.: I drew the elaborate versions of the storyboard. But I can’t draw, and I certainly can’t ink, at the level that Mike can. What I can do is create composition and come up with really interesting juxtapositions of

images on the page and efficient ways of storytelling. But I could never have done this without Mike. There’s something unique about him. I don’t see that in any other art. I see a lot of good art out there, but he doesn’t look derivative of anyone. He looks like his own thing.

Unwinnable: The visuals themselves can be pretty grotesque and visceral. And I wondered about that because you said this takes place in the future.

Unwinnable: Would you say it represents your fears of a future in which countries act as corporations, or did you create this world from the tone of the original text?

K.R.: What you’re seeing of the United States in that sample reflects a very real disintegration of the middle class. And that’s happening now; that’s not conspiracy theory. The gap between rich and poor has been widening for a long time.

Unwinnable: So, do you see this as a critique on American life as well?

K.R.: I don’t think it’s a critique so much as it shows where we’re headed. The concept of the financial industry as something separate from national security is what I’m challenging. If there’s anything that threatens national security today, it’s the economy. You can’t support a military without a healthy economy. I show a big Chinese firm competing against a big firm funded by India, and they’re competing for this company that makes industrial black holes using military tactics – sending in mosquito-sized drones. The idea of corporations using those technologies isn’t so far-fetched when you look at what people are doing just to sell some newspapers. So, I think it’s more about the global financial world and where that intersects with national security and military tactics.

Unwinnable: Speaking of technologies, in an earlier draft, one of the characters is missing two of his fingers. But in the drafts online, he’s got robotic fingers. And the main character has optic implants and alterations to his bone matter. Why include this kind of technology in the story?

K.R.: It’s in keeping with the application of military technology in the private sector. If you look at telecommunications technology, a lot of that came from the military. To keep that realism there, I didn’t want to make laser guns and far-out crazy shit. I wanted it to be tangible technology that makes the world of the near future seem not so far away. There’s some good shit that happens later in the book where technology plays a part. In fact, the biggest twist of the novel is tied to a certain kind of technology that hasn’t been revealed yet.

Unwinnable: Where do you go from here? What’s the next big project?

K.R.: I’m writing a spec script – a horror movie or book. I’m not sure. I kind of want to do both. It depends on the material for me whether it’s book or movie. With Art of War, it was always going to be a book because I loved doing the artwork, and you’re never going to be able to do that in a movie to the same extent. I’m working on something I may end up doing manga style and maybe working with Mike on that. But I’d love to develop it as a low-budget horror at the same time. I’m a huge fan of the demonic possession genre of movies like The Exorcist.

Unwinnable: What do you think about that?

K.R.: [Laughs] Well, I like that they hired Diablo Cody for the script because she’s funny, and Evil Dead makes you gasp, but it’s also very funny. She’s not cheap, so I’m glad that they’re spending money on a good script. Sam Raimi is really talented, and that’s his baby. I think he’s going to take care of that one.