You can go home again.

In Patrick O’Brian’s Aubrey-Maturin series, Captain Jack Aubrey often reflects on the solitary lot of the captain aboard a warship. By tradition, propriety and the needs of running an efficient vessel, the Captain is always at a remove from the men under his command. O’Brian describes the quarterdeck as an isolating place, the captain forever trapped inside the vacuum of his authority and the dignity of his role.

We join Picard in his quarters, staring through his reflection with a slack, haunted expression on his face. This man is a stranger to us, and to himself.

Jean-Luc Picard’s command style and Patrick Stewart’s portrayal of the character both owe a great deal to 18th century navies, with their wooden ships and iron men. Picard’s approach seems to make him stronger than a captain like Kirk, in some ways, better adapted to discipline and responsibility. Kirk had Spock to be the distant, conscientious counselor, freeing him to be more accessible, less inhibited than his role might suggest. Picard is alone…and more brittle for it.

It’s there when we first see him in “Family,” the seminal episode of TNG’s fourth season and the capstone of the Borg arc that started with “The Best of Both Worlds.” Picard has survived his ordeal as a prisoner and unwilling collaborator of the Borg, having destroyed an entire Federation fleet before being rescued by the Enterprise. We join Picard in his quarters, staring through his reflection with a slack, haunted expression on his face. This man is a stranger to us, and to himself.

Prior to “Family,” Picard had seemed somehow untouchable. Now he looks shattered, stripped of his uniform and all his armor. And aboard ship, he has to go on being Captain Picard, which is why he so badly needs to escape his authority and his reputation. It’s why he needs to see his family, even if the meeting is bound to be strained.

Yet the episode opens with Worf receiving news that his parents are coming aboard the Enterprise for a visit. He’s upset by the news, because family visits to serving officers are inappropriate by Klingon standards and because he’s still reeling from being stripped of his honor via a Klingon discommendation. He tells Riker, “I do not believe any human can truly understand my dishonor.” 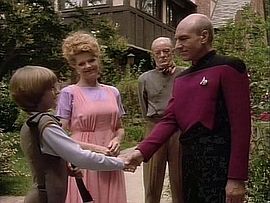 He’s not wrong, but as his adoptive human father says, “We didn’t have to [understand]. We know what kind of man you are.” Worf is bent on bearing his cross alone, but his mother and father will not let him get away with that. It’s why he resents them…and why he needs them.

The wonderful and infuriating thing about having a family is that they never really grant us the identities we create for ourselves. Picard will never be The Captain to his brother Robert — just a high-achieving little brother whose self-possession and brilliance will forever be an affected vanity. Worf will always be a sweet, serious little boy to his parents, his persona as a proud Klingon warrior a put-on to be indulged and respected, but not wholly believed.

This point is underlined by Wesley’s subplot. Wesley, whose father died on a mission for Starfleet and left him to grow up aboard a starship, meets not his father but the literal projection of Jack Crusher in the form of a hologram recorded shortly after his birth. He sees a young man not so very much older than himself, one who is keenly aware that he’s making it up as he goes along and wanting to say something honest and unguarded to his son before he starts wearing the mask of a parent.

As much as we might resent the way our families don’t quite give us what we think is our due, the way we always feel a bit like the children we once were when confronted with their knowledge of us, we need that place where we can throw off the costume. Captain Picard cannot weep in front of his crew aboard the Enterprise, but there is no other way he can process the overwhelming grief and blame he feels for what happened to him aboard the Borg cube. Worf needs his mother and father to comfort him, to tell him that they are still proud of him, that he can still be proud of himself, even if he has fallen short of the ideals he set for himself. What makes Wesley’s story so sad is that he will never quite have that connection – that at the moment of his greatest vulnerability his father vanishes. Yet Wesley does get the reassurance that his father would have understood, that both of them are making it up as they go along, unprepared for the responsibilities thrust on them. 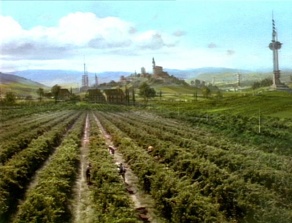 Picard took those responsibilities willingly, even eagerly. But they have become such a part of who he is that he has no idea how to put them down, how to rest. In “Family,” his two pivotal scenes both occur in the vineyards of his youth. The first is when an old friend offers him a job outside of Starfleet and Picard looks stunned to find the automatic refusal doesn’t come. He seems surprised he might actually want to stop being Captain Picard and instead be Jean-Luc. His friend is the one who says, “But I know you – you’d never leave Starfleet.” Picard can only offer a halfhearted echo.

The second scene is where he finally has a fight with his brother Robert. Robert’s resentment of his brilliant younger brother comes to the fore, the anger of the dutiful son who stayed home and took on the family business while his brother was free to carve an identity all his own. Jean-Luc is sick of his brother’s sneering condescension and bullying. After an increasingly heated argument, Jean-Luc finally decks the elder Picard and the two continue brawling through a row of vines and into a deep furrow of mud.

The fight carries on with something like hatred for a moment, the two men reduced to grappling and punching in the mud. Then Picard is on his back, trying to get up, and Robert keeps shoving him back down into the mud, and Picard starts to smile. He shoves his brother back and the men fall to pieces laughing.

But while the pair’s anger gives way to laughter as they have another sibling donnybrook, Robert observes, “You needed it. You have been terribly hard on yourself.” 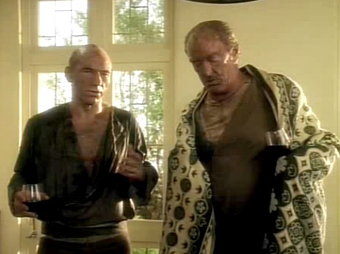 Picard’s smile turns into a grimace and the laughter slowly, almost imperceptibly turns to tears of grief and rage at memories of his assimilation by the Borg. He tells Robert, “They took everything I was…I wasn’t strong enough. I wasn’t good enough.”

This is what Robert was trying to tell Picard. His standards are impossibly high. Robert’s resentment of Jean-Luc contained a warning: he had never in his life learned how to deal with his own failures and frailty. Now Picard has gone through his own Kobayashi Maru and learned that sometimes, for all his abilities and strength, he will not, cannot, rise to the occasion. Robert tells him that this is going to be with him for a long time, that he has to live with it. And he can leave Starfleet or stay, but his grief and pain will be there no matter where he goes. But, unspoken, Robert will support Picard no matter what choice he makes.

The overwhelming majority of the time, Star Trek is a show where things work themselves out in “the last five minutes.” The characters’ virtues win the day, and there is no problem so complicated or threatening that you can’t defeat it by standing by your friends and being true to your character.

“Family” is the rare episode that addresses what happens when things don’t work out, when you’re not as strong as you thought you were, and you don’t feel like the person your friends and loved ones think you are. It’s a reminder that for those of us lucky enough to have families who love us, even if it sometimes feels cloying or patronizing or just too unconditional or unearned, that it is family that grants us forgiveness when we cannot forgive ourselves.