Through the years the Star Trek franchise has brought us many great moments. The cinematic triumph of The Wrath of Khan, the classic battle between Kirk in Spock in the original series episode “Amok Time,” the philosophical beauty of The Next Generation episode “The Inner Light,” the epic Dominion War story arc in Deep Space Nine – these are just a small portion of examples of how Star Trek has endured for almost 50 years. 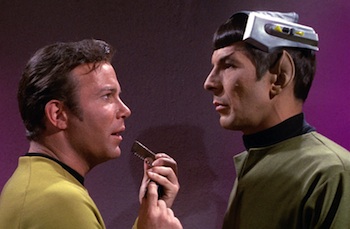 Sure, there are many silly moments, like some forgettable seasons of Voyager and Enterprise that don’t need to be mentioned. But no matter what, neither images like Kirk fighting the Gorn captain (a guy clumsily walking around in a rubber lizard suit) in the episode “Arena” nor creepy incidents, like the android Data and Lt. Tasha Yar having sex in “The Naked Now,” compare to some of the actual lows of the Star Trek franchise. These are the stinkers that barely possess any entertainment value.

Many of the worst episodes of The Original Series are found in the third season. Star Trek had ratings issues throughout the first two seasons, and CBS eventually pulled the plug. Fans who were already unhealthily obsessed back then started a written campaign to bring it back, and succeeded.

It also helped that Trek had many celebrity supporters like Dr. Martin Luther King, who pleaded with Nichelle Nichols to stay on after she expressed doubt about continuing. When The Original Series was brought back for its third season CBS slashed the budget, pushed it back to a then-dead zone time slot of 10:30 Friday night, and scripts were cranked out to finish off this charity bonus season. Many episodes in season 3 are pretty terrible, and not even in a funny way.

Take the season 3 opener “Spock’s Brain.” Originally airing in October 1968, “Spock’s Brain” has possibly one of the most ridiculous plot synopses ever. A sample quote from the Wikipedia page: “— an alien female beams aboard the ship and, after incapacitating the crew, surgically removes Spock’s brain. Kirk and the crew have just hours to locate and replace it before Spock’s body dies.”

The odd thing is that this episode only gets stupider and weirder, and yet never gets more entertaining. While “The Trouble With Tribbles” is a campy but damn entertaining episode, in “Spock’s Brain” everyone just seems bored. Plus Spock gets to wear headgear that allows Dr. McCoy to operate him with a remote control. Because you know, that’s how you move someone lacking a brain.

The rest of the episode takes place on the planet where the brain-stealer is from. It turns out her name is Kara, and her and her people are the Eymorg, adults with childlike brains who are one of a billion human-like alien races in the Trek universe. The ultimate reveal of the episode is that the power of the Eymorg’s ruined city has been restored thanks to Spock’s brain, which is being kept in a box. 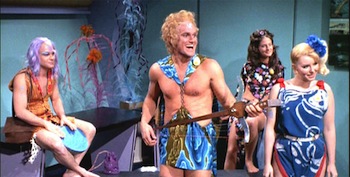 There’s also a computer called “The Great Teacher,” which apparently taught Kara how to perform non-lethal brain surgery. Dr. McCoy manages to convince the Great Teacher to, well, teach him to reverse the non-lethal brain surgery after Scotty fake-swoons and Kirk steals a phaser back from Kara. Spock gets his brain back. So, despite how ridiculous and potentially entertaining this description of the episode sounds, don’t believe it. If you feel like punishing yourself, queue this bad boy up on Netflix and see how far you can get through it before it feels like someone stole your brain.

Season 3 had a lot of other notable duds, including the terrible and kind of racist “The Paradise Syndrome,” where Kirk is stranded on a Native American planet, loses his memory and becomes their chief. Another clunker is “The Way to Eden” – this one is often referred to as “the space hippie episode,” and space hippies it does have. Kirk and the crew are incapacitated by said space hippies because of their folk music; the groovy spacefarers are looking for a planet which possesses what they believe to be Eden, but it turns out to be a planet on the edge of the Romulan Empire that’s covered in poisonous plants.

The episode ends after the space hippies realize they made a big ol’ boneheaded mistake and give themselves up. It really makes you doubt how the original Enterprise crew is considered the greatest in the history of the Federation when they’re compromised by one childlike cavewoman and a bunch of people who got lost in the space-time continuum following Jefferson Airplane on tour.

Budget, compromises, lack of inspiration and ego have led to other low points in the Trek franchise over the years. After Leonard Nimoy directed the entertaining IV: The Voyage Home, William Shatner decided to take the reins for the 1989 sequel Star Trek V: The Final Frontier. While there are some great character moments in this movie (as there are in pretty much everything the original cast is involved in), the movie suffers from too much ambition and is executed sloppily. 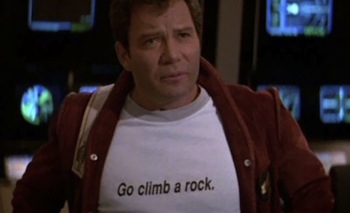 Long story short, the crew meets God at the end, but not really. When they meet the being, it wishes to hop aboard the Enterprise and take a trip. Kirk catches on, asking “What does God need with a spaceship?”

Kirk, of course, is speaking from years of experience, having dealt with aliens resembling gods of all sorts, most of whom are trying to hop on board the Enterprise and take a ride, because gods are ultimately moochers. The rule of thumb with the Star Trek movies, as brought up in the classic British comedy series Spaced, is that the odd-numbered movies are all pretty terrible up through The Next Generation movies, which break the rule with Nemesis, the tenth movie.

This brings us to the worst of Star Trek: The Next Generation. When it premiered in 1987 I was the perfect age for its eager and mostly idiotic first season. Having re-watched some of those episodes recently, I can tell that I’ve experienced another case of shitty nostalgia, like my fondness for the first four Police Academy movies.

That first season was a mess, with many episodes trying to be classic Star Trek but with an untested crew possessing  a completely different dynamic. It wasn’t until the second half of the second season that the episodes started to get consistently better, and by the third season it was unstoppable (weirdly the opposite of its predecessor).

Still, Season 2 had its fair share of clunkers, including the finale “Shades of Gray.” How the show wasn’t cancelled after this episode is a mystery, since it’s a clip show. Remember those? We barely see them anymore unless a long-running show like The Office or Lost is ending. 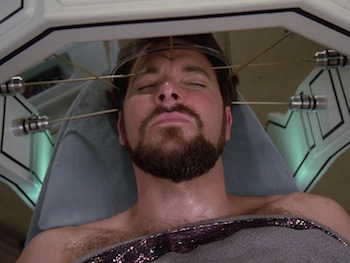 They used to be more commonplace back in the days before heavy syndication, TV on DVD, and streaming online made it much easier to watch classic moments from old episodes. Apparently the 1989 episode was necessitated due to a writer’s strike, so at least there was an excuse for its existence.

On an away mission Commander Riker is struck by a thorn from a vine plant, which causes a virus to rapidly spread through his body. He slips into a coma and has to fight the virus by dreaming. Yes, dreaming. What does he dream about? The past two mostly mediocre seasons of Star Trek: The Next Generation. While the circumstances that brought on the creation of this episode were unavoidable, this episode is very avoidable (and pointless). Here, I’ll spoil it for you: Riker gets better.

But one of the worst efforts from The Next Generation is the episode “Sub Rosa.” The 14th episode of the seventh and final season, it focuses on Dr. Beverly Crusher going to a planet not unlike Scotland and attending her grandmother’s funeral. By the end of the episode you realize that it covers a good portion of past Unwinnable Theme Weeks, and not in a good way.

She ends up staying at her grandmother’s haunted house, and is then seduced by a ghost. They have sex. (For a show that has about as much sexual content as Sesame Street has cursing, it’s bizarre that this isn’t the first case of an unnatural sexual encounter.)

In the universe of Star Trek, typically when something appears to be one thing (like God), science explains it as something else (typically an alien). This ghost is eventually explained at the last minute to be some kind of alien, but this is after a ridiculous episode of him getting his powers from a candle and possessing Crusher’s dead grandmother, who rises from her grave. 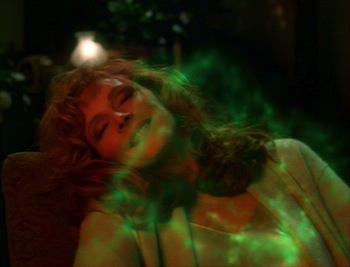 I caught this randomly as a rerun one summer night and I couldn’t believe that it was a TNG episode and not Ghost Hunters: Space Scotland. Once Crusher destroys the ghost candle with her phaser, her erstwhile lover (and grandmother) disappears. I’m assuming this was some backend script they used to pad out the uneven final season of TNG. In a dark alternate reality it would have been the finale, and not the wonderful two-part episode “All Good Things.”

While some will bicker and fight until their dying breath over the merits and/or shittiness of all things Star Trek, there is no denying the awfulness of the examples mentioned here. For a franchise that is almost 50 years old, the good to bad ratio of the better series is still not too bad. Silly ideas can make for great Trek episodes, as long as everybody involved is into it. Now you know what happens when no one is actually on board.