Editor’s note: At 13 years old, Jen Murdoch may be Unwinnable’s youngest contributor, but she’s also one of the most prolific, having written two NaNoWriMo novels already. (Way to make us all feel lazy, Jen.) Here, she discusses how the Season 2 episode “The Royale” blurs the line between fiction and reality.

I love stories that explore the thin line between reality and fiction.

“The Royale” explores a concept not unfamiliar to Next Gen, the power fiction has over us. In the episode “11001001,” Riker and Picard become enchanted with a Holodeck creation, Riker essentially falling in love with the fictional femme fatale Minuet. In “Ship in a Bottle,” the Sherlock Holmes villain Moriarty is given the power to take over the starship and break out of the Holodeck into the real world. 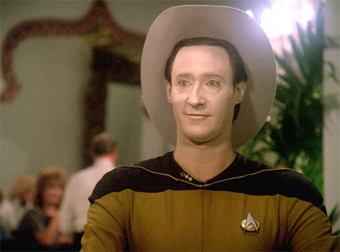 But “The Royale” takes this to a different level, creating a planet where the only structure is a casino based on what Picard calls a “second-rate novel.” In this story, Riker, Data and Worf beam into a strange simulation of a hotel casino from a cheesy pulp novel — only to discover they’re physically trapped inside.

As an aspiring fiction writer, I find the idea of being immersed totally in a fictional world intriguing. This episode takes the power of fiction to the extreme, embodying the idea that words can move worlds.

Yet this is not the first time Star Trek plays with this idea. In “A Piece of the Action” in the original Star Trek series, Kirk and Spock find themselves on a planet that’s become the perfect replica of 1920s Chicago, gangsters and all. This society is the result of a single book being left on the planet from a previous starship’s visit.

But “The Royale” goes one step further than “A Piece of the Action,” because we learn that the casino was created to be a home to a single person, instead of created by a society. However, according to the journal of the dead American astronaut found in the rooms above the Royale casino, living in a fantasy world is not everything one would hope:

“I hold no malice toward my benefactors…they could not possibly know the hell they have put me through, for it was such a badly written book, filled with endless cliché and shallow characters. I shall welcome death when it comes… “

Being trapped in a hotel for the rest of your life is probably not a welcome thought in any situation, but being trapped inside a bad novel…perhaps that’s truly hell.

In the ends of both episodes, the main characters find the only way to escape their predicaments is to blend in with the fantasy, and both away teams go about it in similar ways, by tricking the fantasy in some way. In “The Royale,” Riker, Data and Worf only escape once they pretend to be the “foreign investors” who buy the hotel at the end of the novel. 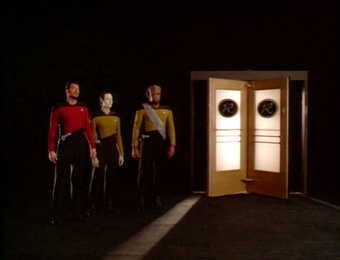 But maybe there is another meaning in these episodes. “Fiction versus reality” can be interpreted in many different ways. In real life, people become trapped in fictional versions of themselves, and these façades, if worn long enough, can become reality.

As an adolescent, my world view is changing rapidly, and I sometimes find myself feeling as if I am trapped in my own imagined limitations, my very own Hotel Royale. If only, like Riker, Data and Worf, I could find some way to escape them. All around me, my peers are trying on different façades and fictions – acting like one another, like adults and even like fictional characters that they read about and observe as role models.

So perhaps the Hotel Royale is an intricate metaphor for our own fictional personas.

Becoming trapped in fiction is something we are all at risk of, though perhaps not in such a drastic way as Riker, Data and Worf. The constant streams of self-doubt and mental barriers that run through our heads and build up can trap us in a fictional version of ourselves that can, like the Hotel Royale, be difficult to escape.