I was part of the first generation of people that were born into Star Trek as the children of fans of the original series. By the time I was born, Star Trek had already become a science fiction favorite with an established fan base. My father, a fan of science and math, enjoyed Star Trek and introduced it to me at a young age. I remember going to Washington D.C. to see my cousin Barbara and visit the Air and Space Museum, where I saw the U.S.S. Enterprise hanging from the ceiling. We bought a plastic model Enterprise at the gift shop. I had a pair of black rubber boots that I called call my “Spock boots.” I was the first kid I knew who could make the Vulcan salute. Much like religion, I didn’t know a world without Star Trek.

When the original Star Trek series came out, the United States was already well into the Cold War and the Vietnam War. Star Trek has always expressed a feeling of human progress, and the original series used themes from the late 1960’s as the basis for the tone of much of the show. It is only natural that The Next Generation would do the same. At this time, in 1987, Mikhail Gorbachev was serving as General Secretary of the Communist Party of the Soviet Union. He would be featured nightly on the evening news along with words like perestroika and glasnost. It made sense that in TNG, peace would be made between the Klingons and the Federation. Things were going to be different.

As an awkward 13-year-old boy, the old Star Trek finally felt dated next to this new shiny edition. Thus began criticism from my father: “This show is great, but they really need to have less of the kid.”

Even the most committed fans will tell you that first season was a bit too crisp and clean — Commander Riker didn’t grow out his beard until Season 2, Worf was looking more like Space Urkel than having any Klingon Warrior heritage. Much like young Chuck, The Next Generation needed to grow into itself.

With the new series there surely would be acknowledgements to the original series and movies. Sometimes a tribute to previous work is expressed as a show of respect to the elders. “The Big Goodbye,” an episode from the first season of TNG, was crafted as one of these moments of respect. “The Big Goodbye” takes a page from one of the campier original series episodes, “A Piece of the Action,” where  the snappily-dressed Kirk and Spock head to Sigma Iotia II, a planet that’s a great example of what happens when you don’t follow the Prime Directive. During a previous encounter with the indigenous human-like Iotians, the crew of the starship Horizon left behind a copy of the book Chicago Mobs of the Twenties. The Iotians mimicked their entire society around this book and treated it like a sacred tome, thus creating a world with the style of 1920’s Chicago. The viewers are treated to Kirk and Spock trading snappy lines and wearing flashy suits. It’s good clean fun, and yes, plenty campy. 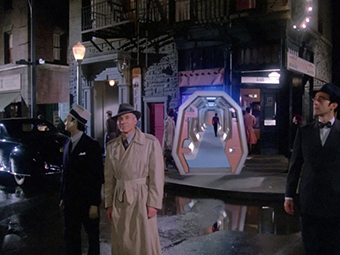 “The Big Goodbye” is a nice way to pay homage to the original series.  While relieving stress in the Holodeck, Captain Picard assumes the identity of Dixon Hill, and acts out his fantasy as a no-nonsense private detective on the rough streets of 1940’s San Francisco. Dixon Hill is the lead character in “Amazing Detective Stories,” one of Picard’s favorite 20th century noir tales by pulp writer Tracy Tormé. While Dixon Hill was a fictional composite of famous noir detectives, Tracy Tormé was very much real — he wrote the episode’s script.

I thought the Holodeck was great — it was the place where all stories, fact or fiction, and even training exercises could be created. Picard, too, is so thrilled by his first Holodeck experience that he can’t stop telling his closest associates and crew about how realistic and amazing an experience it was. He mentions specifically how stirring it was to have a holographic female construct kiss him. The whole scene becomes more and more awkward with the increasing enthusiasm Captain Picard put into his review.

Yet “The Big Goodbye” doesn’t explore anything quite so tawdry. Data gets to wear a fedora, Dr. Crusher looks great as a femme fatale, and they cast film noir veteran Lawrence Tierney to play mob boss Cyrus Redblock. The focus of the episode takes place on the Holodeck. Of course, to add suspense, Picard and crew are stuck in the malfunctioning Holodeck, where the safety protocols have been disengaged and the bullets are very much real. Meanwhile, there is a ship-wide crisis that will have to be handled by Commander Riker. This will continue to be the case until the end, when Geordi’s quick fix makes everything work right, but in his usual “not exactly safe” kind of way. 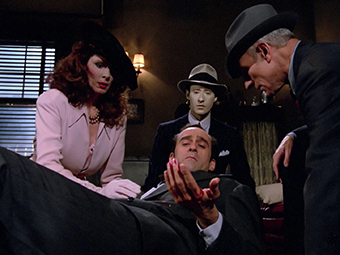 The episode concludes with Data and the Captain trying to convince Redblock and his henchman Leech to not attempt to leave the Holodeck. The gangsters are not able to grasp the fact that are part of a computer program and they will be erased from the program permanently if they leave. Bad guys will always do dumb things. With guns in hand, there’s little to stop Redblock and Leech from walking right out of Dixon Hill’s office and on to the brilliant white decks of the Enterprise. They pass through the arch and are able to walk a few feet. Then they start to realize that they might have made a mistake as they dissolve into the ether. The day is saved, and lessons are learned. The fans of old are shown that it is okay to trust this new Captain Picard.

The only massive drawback to Dixon Hill is that it is basically dinner theater.