Star Trek: The Next Generation premiered on my seventh birthday, and what a present it was. Reruns of the original series were all well and good for my regular dose of Saturday morning campiness. But this was 1987, dammit! It was time to evolve beyond judo-chopping stuntmen in rubber lizard suits. 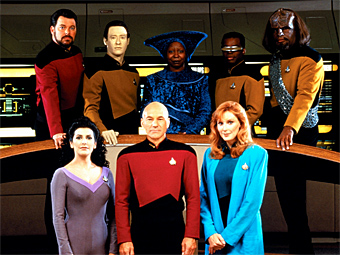 There was a lot to look forward to. There was a new Enterprise, a sleek, elongated ship whose saucer section could detach. There were new technologies like the holodeck, a virtual playground where fantasy became reality. There were new allies (wait, Klingons are good guys now?) and new enemies (wait, these shrimpy goons with the huge ears are supposed be threatening?). There was a new mythology, a new future history to be explored.

But most exciting of all, there was a new crew – the dignified Captain Picard, the charming Commander Riker, the knowledgeable Dr. Crusher, the curious android Data, the blind helmsman/engineer Geordi, the empathic Counselor Troi, the stoic Klingon officer Worf, the short-lived Security Chief Yar and even a teenager – the much-maligned Wesley Crusher – in whom young viewers like myself couldn’t help but see themselves reflected.

TNG had its share of growing pains as it evolved over the course of the next seven seasons. In its adolescence, the series struggled to escape the shadow of its forbears and forge its own identity. But as it matured, TNG garnered a following perhaps even more rabid than that of its predecessor, rising from a risky, uneven gamble to the #1 syndicated show in the country. And even as it carved its own path, it paid homage to the original series by giving us stories that focused on big philosophical questions. How do we define “life”? Where is the line between fantasy and reality? How do we deal with regret, with loss, with family, with change?

Yet the reason TNG endured, the reason it built its own legend, was not because it was a stimulating intellectual exercise or because it featured fancier special effects. It’s because the crew of the USS Enterprise-D, the characters we saw every week, grew into their own. They became a TV family we wanted to spend time with. As the cast, led by the brilliant Sir Patrick Stewart, settled into their roles, their performances made us invested in how they would interact, how they would overcome challenges, what they would learn every episode. By the third season we no longer worried about whether this crew would escape the shadow of Kirk, Spock and Bones. They were already boldly going where the old crew had never gone. 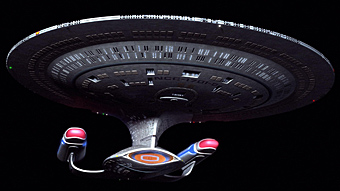 I’m proud to present Team Unwinnable’s take on TNG this week, with seven essays by seven different writers covering one episode of each season. We’ll examine fan favorites like “The Measure of a Man” and “The Inner Light,” along with watershed moments like “Family” and “Tapestry.” As a bonus, we’ll also feature additional pieces on everything from transporter phobia to J.J. Abrams’ reboots. And because no Star Trek series is exempt from the occasional clunker, we’ve got a Worst of Trek roundup as well. Finally, we’ve got a terrific entry from our youngest contributor ever – a 13-year-old who can write circles around the rest of us. How do you like them apples, Wesley?