It started with a gravestone. My own. This was before I’d read Spoon River Anthology, which is a wonderful collection of poetry. This was just me on the computer one day, Googling myself. There it was – my gravestone. Matthew Michael Ritter. Already dead, of course – died at the age of only 12 or 13. Still, I felt a compulsion to visit that grave – until I learned it was 300 miles away. So I forgot about it for a while. 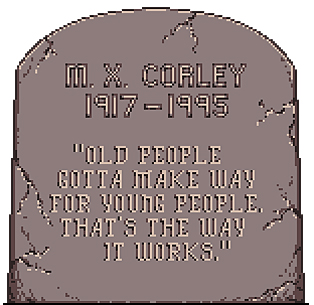 I’ve always had an obsession with epitaphs, writing them all the time, thinking about the good ones. Funny ones are all right, but funny ones are often just funny. The ones that stay with me are the happy ones, the dark ones, the sad ones, the odd ones and the ones that seem to make no sense. “The apple tree will outlast us all,” was one I read once. It seemed to tell a story. Maybe a family that planted an apple tree in their backyard, generations ago, and someone grew up seeing it every day, knowing it would be there after he was gone. Maybe not. But that kind of epitaph has always stuck with me.

When I read Spoon River Anthology, I saw that epitaphs could be art. I learned that stories could be told by weaving together the narratives of different epitaphs and graves and all the elements therein. I thought back to the gravestone that bore my name and the child it belonged to. I felt personally connected to this person, a yearning to know his story. I thought about what I could do with this desire. A book? Spoon River Anthology had already done it better than I ever could. A play? A movie? There are already so many morbid ones out there, and part of the charm is trying to weave the narrative flow yourself.

Then, I realized it: a game. Maybe not a game in the traditional sense, but a game nonetheless. So someone could explore a graveyard and learn about a town. By walking through the rows of the dead, you could learn all about the town, maybe even more than the people living in it knew.

Making a game isn’t easy, though. I’d worked on lots of games before and most of them failed to get completed, often because the people making them overstepped what they should have been working on. Everyone I spoke to said the game should be 3D, which is all fine and good. But I myself am a pixel artist and feel the game would work best in that style. That way it isn’t real, but rather represents things that are real. Of course, 3D graphics do this, too, but in a way that often feels less symbolic.

I started doing mock-ups of gravestones, asking my pixel art friend to help. I talked to some programming friends and sound design friends and soon enough had a small team. As always happens, everyone had so many ideas – so many great things that would make the game amazing: weather systems and randomly generated gravestones and so on and so forth. 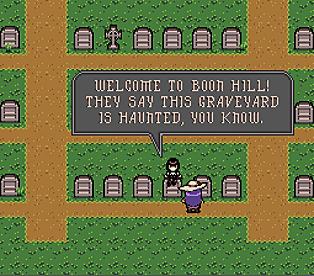 I still have to deal with the excitement and mitigate it, because I want Boon Hill to get finished. The game can’t touch anyone if it stays in production forever. So, first things first: we’re trying to make the game as basic as possible. If, once that’s done, we have the time and money for other things, then that would be wonderful. But the game needs to be finished at its base core: walking around and looking at graves.

Designing and developing Boon Hill has been interesting. I’ve never approached writing anything in this way before. To start with, I figured out where the city this graveyard is in is located. Beginning with its founding, I wrote a timeline of major events that have affected the town: world wars, influenza epidemics, fires, booms, economic destitution and so on. I then made a rough map of the graveyard, sketching boxes around the areas and adding dates. People dying around the same time would of course be buried near each other. I tried to logically think about how the graveyard would progress, in which direction and in what way. When did they have to expand the grounds and how? Where was the oldest area? The youngest?

I want Boon Hill to be a walking tour of the town through the eyes of those who once lived in it. I want it full of small personal stories about individual success and loss, and also larger ones, ones that last for generations. I want Boon Hill to be about connecting to people and thinking about the lives they lived. It may seem morbid, but that’s something you can only do when you’re alive. Epitaphs aren’t for the dead. No dead person cares what his gravestone is like. Graveyards are for us, to see them, to remember and to think about what has come before.

I am of course terrified. Terrified that the game will be a boring mess. Terrified we’ll get caught up in trying to add this or that feature and run out of time and money and my reputation will be ruined. Terrified I’ll get in a car crash and die and my gravestone will read, “Woops.” I can’t let that stop me, though. Of all the games I’ve played, I’ve never run into one quite like what I want to make with Boon Hill. I heard someone once describe this kind of game as a “walkabout,” which seems as good a name for the genre as there can be. I’m terrified, but I need to press forward. That’s the whole point of being alive. I won’t get the opportunity later. 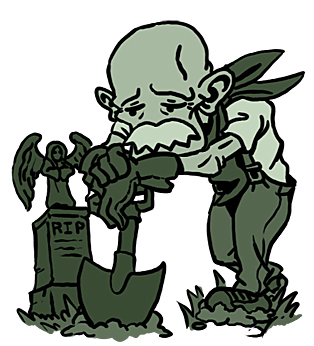 Once Boon Hill really got underway, we had some mock-ups and basic engine stuff done. We made a video and put up the Kickstarter. I used it as an excuse to go visit that gravestone with my name on it. The graveyard was beautiful, and there was so much there that hinted at stories: a section devoted to Japanese gravestones, family plots, an area that no one seemed to take care of. I saw a grave that had children’s toys hanging from a tree over it. So many great stories…

Yet I couldn’t find the grave with my name. It was late, and there was no one in the office to ask for directions. Though my friends and I searched the graveyard up and down, we never found it. For all I know, it doesn’t exist, or at least not in that particular graveyard. Yet the search for it has led me on a very interesting journey.

That’s the kind of thing I want to try and do for others with Boon Hill. There’s not much more one can ask for.