Four issues in, and I’m still trying to find the spine of Brian Azzarello’s story. I don’t mean that in a sense that Azzarello is afraid to utilize the established characteristics of Edward Blake; I mean that so far, the motivation of Comedian is lacking. What exactly the story has set out to accomplish is a mystery, and this issue feels like one more disjointed entry. 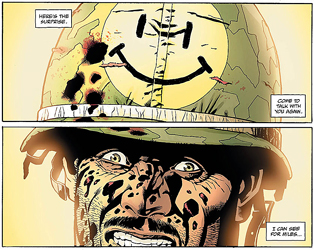 We start with a demolished Vietnamese village and then go backwards in time to see its destruction. What we learn is that Edward Blake on drugs is as bad as Edward Blake off drugs. When Eddie drops some acid, he goes on a killing spree – much like Eddie without any acid. And here is where Comedian falls flat. The character has not budged from his one-dimensional niche this entire series. All we’ve seen – save for a few interactions with famous people like Marilyn Monroe and the Kennedys – is Edward Blake doing exactly what we expect of him.

But whereas Azzarello’s other series, Rorschach, has found ways to make Walter Kovacs’ single-minded desire to harm criminals intriguing, Comedian doesn’t have a lucid focus. The few surprising character moments – like Edward befriending two Vietnamese children – still feel out of place, given the indifferent and apathetic Blake who appeared in earlier issues.

The art, however, has improved greatly. J.G. Jones gives tonal life to the imagery, particularly in the final moments of the book where Eddie and his platoon, high on LSD, wander into a village and wreak havoc. While earlier issues of Comedian had panels without borders and images seeping into each other, the compactness of the art, and its clear transitory movements, make this issue visually impressive. It’s not enough to make up for the story, but I would be remiss in not mentioning it.

I’m still committed to seeing this through, so I know I’ll buy the remaining two issues. But I do not believe Azzarello can salvage the story and give the comic a definitive focus in such a short amount of time. As long as he has J.G. Jones, however, readers will get a visual treat. 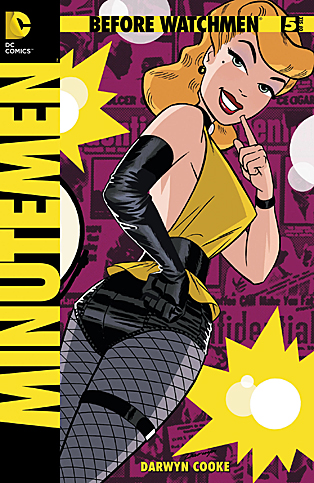 Much like the cyclical nature Alan Moore gave to Watchmen, writer/artist Darwyn Cooke looks to be crafting his own circular epic. The final pages of Minutemen bring us back to where the story began, yet this time we can feel a palpable change in the characters – particularly the narrator of the book, Nite Owl.

The story takes a minor divergence in that it pulls away from the story – involving children, Ursula Zandt and Hollis Mason’s unrequited love – to more or less tell a lost tale of the Minutemen. Their final heroic act for the world is swept under the rug, and Hollis has to see the damage firsthand when he befriends a boy injured in the attack. The disbanding of the Minutemen is a coda more than anything else, but the final page is quite a surprise and one that caught me off guard.

Some of Cooke’s best character moments occur in this book. We’ve been witness to the slow decline of Mothman, and here we see him pushed further into insanity. Additionally, we learn more about Hollis Mason. The details Cooke provides add depth to the character and shed new light on Mason’s relationships with fellow team members, enough so that even the original Watchmen is affected – in a good way – by the addition.

Cooke’s Golden Age style suits the book well, and his quick panel shots help build tension while keeping the story moving along at a good clip. The comic has echoes of Jon Osterman’s accident, but the results are nowhere near as epic. They’re just sad. The final pages of the comic give the climax punch and wonderfully set up the finale in the next issue.

Darwyn Cooke has found a way to take Watchmen and make its backstory fuller. Given the strength with which Cooke writes his characters, and the skill with which he draws them, Minutemen has been a continuously excellent read. I’m not sure how Cooke will wrap up the loose ends established here, but given how impressive his previous issues were, I look forward to finding out what will become of Nite Owl, how Hooded Justice is involved, and what finally drove Byron Lewis to insanity. 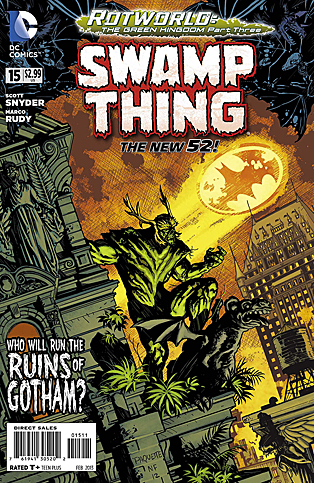 Bannen’s Book of the Week: With his announcement that he will leave Swamp Thing after issue #18, Scott Snyder delivers yet another excellent entry in his continuously impressive catalogue. Since he also writes Batman, Snyder was going to eventually make the Dark Knight and the Green Knight cross paths, but readers didn’t know how. Yet through clever storytelling, Snyder seamlessly inserts Alec Holland into Bruce Wayne’s world, bringing the two characters together in a book that is easily the best of this week’s picks.

Snyder splits his time between Swamp Thing and Abigail Arcane, showing us that Abigail has powers beyond what we originally understood. She’s strong enough to handle the Rot on her own and interesting enough as a character to carry her weight in the book.

Additionally, Alec Holland’s humanity is well preserved. Regardless of his appearance, we can’t help but see his vulnerability and desperation by the end of the comic. Batman and Swamp Thing don’t actually meet in this issue, but given the power Snyder puts into his female characters (such as Barbara Gordon), I’m not rushing to see them have a sit-down just yet, especially if it means less Abigail. But even more impressive is the mythical, yet vivid and coherent, world in which much of the story is set. Snyder’s strength is in his ability to create a mythos for readers to get lost in, while still keeping the story grounded in reality.

Marco Rudy takes a page from J.H. Williams III in this comic, being particularly clever with his panel design. Earlier in the comic, Rudy keeps everything orderly and neat, but when the Rot invades and Abigail Arcane encounters the demons within it, Rudy throws traditional panel designs out and creates images that weep into each other without any formal structure. This aids the unsettling creature designs and the overwhelmingly creepy tone. By the end of the comic, Rudy’s imagery is a work of art, and the book is greater because of him.

With only three issues left and “Rotworld” just hitting its stride, I can only wonder about where Snyder and Rudy are going to leave readers when they depart from the book in three months. Regardless, they offer up another strong story that is engaging in both its writing and art. And thankfully, Alan Moore’s work is paid a great homage through Scott Snyder.