I don’t let my kid play lazy videogames. Kids games, “educational” games, stupid movie tie-ins: these are all verboten in our household. I am not the dad who goes to the library and picks up the adaptation of Tangled for the Wii. We play indie games, art games, weird games and snob games. Most of all, I want us to play good games – games that are well-made, and that have personality, creativity and soul.

And so I was pumped, a couple of weeks back, to bring home a copy of Ni No Kuni, the long-awaited collaboration between Level-5 and Studio Ghibli. We’re big fans of Studio Ghibli, whose films are perfect for children: they are gorgeous, wondrous and sincere. This promised to be a fantastic game, a real game, a game that was watered with the sweat of its creators’ brows. I couldn’t wait for us to sit down and play it together.

So I’m a little chagrined to say that after one night, Ni No Kuni got kicked to the curb so we could keep playing Skylanders Giants.

The Skylanders franchise is the opposite of everything I thought I would ever let my kid play.

Now, the Skylanders franchise is the opposite of everything I thought I would ever let my kid play. In case you haven’t been near a toy aisle in the last two years and have never heard of this: Skylanders is a spin-off of the old Spyro games, and it plays like a basic kid’s game, where cartoonish characters bash the hell out of each other while grabbing shiny loot, solving simple puzzles and following a good guys/bad guy storyline. To these maybe-too-accessible mechanics the creators of Skylanders added a wickedly addictive gimmick: to add characters to the game, you collect toys – real, physical toys at $10-15 a pop. You start with three, but to unlock all of the content in the game, you need at least eight, and you can keep buying more after that.

It’s a crass, commercial money grab. Now, it’s not that I’m anti-commercial. I’m not against collectible toys; I’m not like a Park Slope parent who only buys organic food in edible bags and tries to get the family to stop using toilet paper. I grew up with Star Wars action figures, and when my kid moves from Bakugan to Pokemon and now on to Skylanders, I recognize some of my own compulsive toy collecting habits.

In fact, I kind of dig the toys too. Just today I went over to Toys “R” Us to see if they had gotten in any Eye Brawls. That fucking thing is impossible to find.

So, it’s not that I’m above playing an exploitative toy-based game. I was worried that it would be stupid. And for the most part, it is pretty silly. It’s also very fun. Unlike New Super Mario Bros., the co-op play is terrific: all of the chapters play well with two players controlling Skylanders side by side. Unlike, say, Portal 2, none of the activities requires coordinated action, which is actually a good thing: as much fun in theory as it is for people to work together on a challenge, it’s much more fun in practice to let them just run in different directions and bash whatever they feel like. 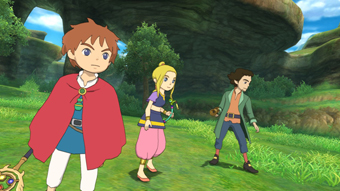 And the toys are a lot of fun. The designers had the freedom to put unique touches and cool ideas on each one: Swarm moves around with a distinct swagger; Drobot, when he flies, pitches his wings in such a way that he looks like the Starship Enterprise; Crusher can explode in a pile of rocks and pull himself together again. Yes, they’re toys, but they’re really good toys. We can play the game together after we’ve both had a hard day and laugh and laugh and laugh.

By contrast, Ni No Kuni turned out to be a really dull game to play with a kid. The cutscenes are darling, but the gameplay expects a familiarity with and a patience for the conventions of JRPGs: you need to wade through the 10 hours that are way too simple to get to the part that’s probably a little too hard. Ni No Kuni isn’t a kid’s game, just like a whole lobster isn’t a kid’s meal: you don’t want to make a kid crack open that much shell to get at that little meat.

Every once in a while in our game writing community, we have a big flare-up about whether games are art, and whether “fun” is important, and so forth, but gaming is a big tent. I don’t think games are art so much as they are more than art: like food or music, they provide an essential sustenance that keeps us alive and happy in countless ways. Skylanders Giants won’t teach us storytelling, atmosphere, or restraint, but it is joyful, well-crafted and surprisingly sincere. For now, it’s just what we need.

Chris Dahlen is still looking for the Eye Brawl. Hit him up on Twitter @savetherobot with tips.