New Avengers borrows its concept from Brian Michael Bendis’ initial run on the title, when he introduced the Illuminati, a group of superheroes made up of Professor X, Doctor Strange, Sub-Mariner, Black Panther, Black Bolt, Iron Man and Reed Richards. This group set about making decisions on how to run the world. But Jonathan Hickman focuses his story solely on T’Challa. The comic is mostly exposition, and it fails to incite the same excitement as some of Marvel’s other “Now” titles. 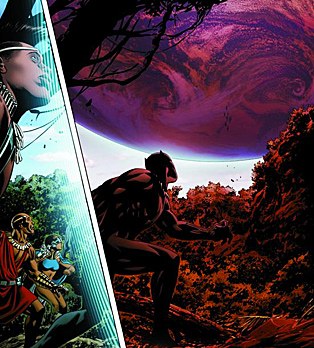 Hickman doesn’t waste time getting to the point of the comic, but once he gets there, the story stalls. By the end of the issue, I really don’t have a clearer understanding of Hickman’s purpose or what it has to do with the Illuminati. T’Challa is given some neat character moments, and the concept seems interesting, but the internal struggle T’Challa is facing (which is the coolest part of the comic) isn’t introduced until two pages before the end. The finale lacks punch because of this, even though it’s pretty good.

Steve Epting’s jungle scenes are meticulously drawn and his characters a mixture of impressive shadows and striking designs. Due to the overall tint of the book, Frank D’Armata’s colorization is limited. This isn’t a negative, per se, as it gives the fully-colored illustrations visual vibrancy, but D’Armata is definitely limited in his scope.

I wish Hickman had given readers more to go on. I want to like New Avengers because I’m excited by the return of the secret superhero society, and I love Jonathan Hickman’s work, but this issue fails to provide an emotional or engaging initial outing. The series has promise, but Hickman needs to move fast if he’s going to keep the story afloat and readers engaged. 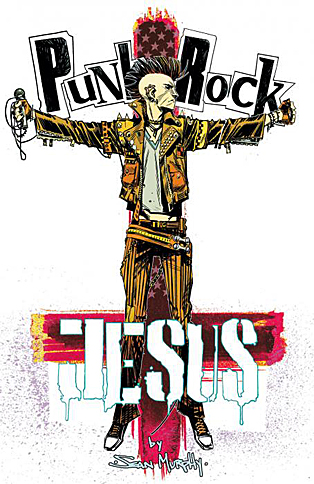 The title of this issue, “Revelations,” tells you everything you need to know about Sean Murphy’s epic conclusion to his celebrated Punk Rock Jesus. Murphy gives the readers an exciting finale that wraps up the story of Earth’s cloned savior in one explosive swoop.

The question of Chris’ authenticity as a savior is answered pointedly in this issue. Furthermore, Murphy explores the fervent nature of religious zealots and the ways in which they justify their decisions, even when they lead to violence. Chris, who has been a combative and pugnacious character, is nothing next to the story’s true heart, the Irish mercenary Thomas McKael. Over the course of the series, Thomas has become a true symbol of honor and faith.

Murphy’s angular and stylized art is perfect for the pacing of the issue, as action scenes are both fluid and clear. Where the comic stutters is in its delivery. The amount of information Murphy has to depict and the loose ends he needs to tie up are forcibly placed into the limited space. This is no more evident than in the final two pages, where Thomas meets up with the villainous Slate and delivers justice on behalf of Chris and his mother.

Regardless of these minor flaws, the comic is a great read and the series the work of a great artist. Murphy has proven that he’s more than just an illustrator, and the power with which he approached the concept – a concept that begets strong and deep emotions for a large number of people – is evident in the product. Sean Murphy has indelibly made a mark on the comic world with Punk Rock Jesus. 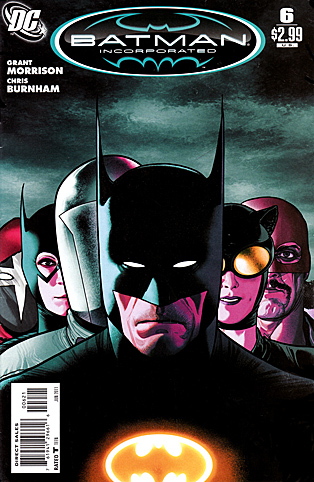 Bannen’s Book of the Week: I was lucky enough to grow up in a house not affected by divorce. My parents are still married, and they mostly kept their arguments to closed doors and out of earshot. But if your parents are Batman and Talia al Ghul, you may have a different experience.

Much of the showdown is mental, as Bruce works his way through Talia’s house of horrors – a converted Batman Incorporated home for the poor. Morrison pulls a page from the new Judge Dredd movie, as Bruce has to fight his way through level after level and wave after wave of mad tenants. Morrison is a master at showing Batman’s adeptness and skill, and with Chris Burnham’s clever panel design, suspense and tension become characters of their own.

Andres Guinaldo and Bit provide additional pencils in the latter half of the book, and while Damian Wayne’s face is glaringly odd, the rest of the imagery is as smooth and glossy as Burnham’s art. Guinaldo’s Batman looks great, and regardless of the shift in style, the imagery doesn’t lose its clarity.

The climax of the comic is a bit abrupt, but it displays Morrison’s ability to make secondary and tertiary characters as important as the main heroes. The final page makes phenomenal use of aesthetic style to tell its story without resolving the conflict and building the finale. I’d love to see the script page for it.

Given the dark tone of the comic, Morrison still finds ways to keep the reading light, particularly through Batman’s gallery of current and former Robins. And if you thought a Bat-Cow and a Bat-Hound were neat, wait until you see a Bat-Cat named Alfred. Epic, gritty and action full, Batman Incorporated is the best of this reviewer’s picks and another powerful entry into a growing pantheon of work by one of comics’ greatest writers.