People who aren’t fans of political intrigue may find Aquaman #18 relatively boring. Geoff Johns spends the issue building his story into its third arc, as now Arthur has to deal with the power that comes with the responsibility. What Johns shows, though, is that he knows how to weave a mystery and build a mythos, all while developing his characters for future stories. 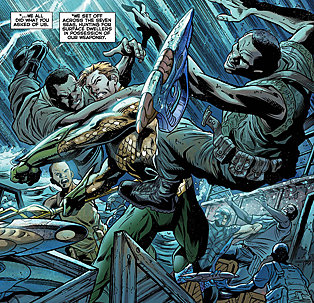 Not everything in the issue is rosy. We’re still dealing with Mera’s outburst when she attacked a store clerk and schooled a few police officers. But watching a god be scolded by the long arm of the law is as drab as drying paint. Clearly, Johns has more in store for Mera but so far she’s been a bit player in Arthur’s world and not an equal.

That being said, the parts of the issue that involve Arthur and his duties as king are enthralling. Clearly, the threat Arthur faced during the “Throne of Atlantis” arc is not gone, and while he may be the leader, people are waiting in the wings to overthrow him. His conversation with the disgraced Vulko is the centerpiece of the comic, as it really highlights the threats he still has to face. And the addition of a new villain creates a neat cliffhanger for the next issue.

Furthermore, Paul Pelletier has slid into Ivan Reis’ role nicely. He has a similar style, albeit not as sharp, but his character designs are as good as Reis’. Rod Reis, however, uses his colors to create a mood-heavy atmosphere. In his hands, Arthur’s kingdom is decrepit and shadowy, lacking any real luster, and it’s definitely a symbol of the ruin into which Atlantis has fallen. The set pieces are reminiscent of the crumbling ruins of ancient Roman buildings, cracked, splintered and dull with age.

Aquaman is gaining steam with each issue, and where I almost wrote the book off in its first arc, I’m glad I stayed with it. Johns has made each issue progressively better, and the beginning of the next arc, darker than the previous one, is a great harbinger for the series.

Guardians of the Galaxy #1 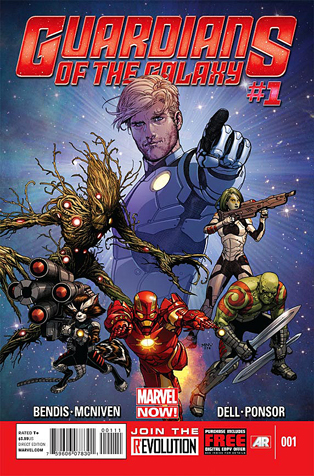 If I were the love child of what basically amounts to an interstellar one-night stand, I’m sure I’d have issues with my father. But if Brian Michael Bendis wants to give readers a lead character to latch onto, he isn’t creating one with the snotty Peter Quill. At no point in this issue is Quill close to likable, and in his role as lead character, he’s more a spoiled brat than an heroic figure.

What Bendis tries to do is establish Quill, his relationship with his father and his role in the universe. To be fair, the comic has a neat concept. Earth is now off limits to interstellar travelers from Spartax, yet the Earth is being attacked by aliens. Therein lies Quill’s dilemma – his mother raised him on Earth so he has a soft spot for it, and his father has ordered him to stay away from the planet, yet since he hates his father, he wants even more to go there.

But Quill comes off as a disobedient child rather than a jaded, hurt son who despises his father for all the years he was never around. Peter’s time with his father is akin to that of an apathetic teenager having dinner conversation with a parent who spends the day desperately trying to connect to a child about whom he knows next to nothing.

The rest of the comic is a chaotic read. I want to know more about the brutish Drax the Destroyer, the dangerous assassin Gamora, the Ent-like Groot and the quirky Rocket Raccoon. But these characters are only given fleeting moments in the book, which is action heavy from its midpoint to its end, so at no time are their personalities established. Why, for example, does Rocket track down a sliver of Groot’s body? I’m guessing Groot can reform when destroyed, but Bendis gives the reader no foundation upon which to build.

The plus would be Steve McNiven’s art. Even amidst all the chaos, the art never loses its clarity. McNiven’s splash pages are gorgeous and his character designs impressive. The sharpness of the imagery is the book’s main sell, and McNiven’s art, coupled with John Dell’s inks and Justin Ponsor’s continuously gorgeous colors, makes each page a visual treat.

As a reader new to Guardians of the Galaxy, I don’t find much to keep me enthralled. I want to like the book so much because I know it has a soft spot in many a comic fan’s heart, and it’s the next step in Marvel’s ever expanding movieverse. But Bendis doesn’t give me much to go on. Still, his stock is good enough to draw me back next month – but I can’t guarantee a much longer stay. 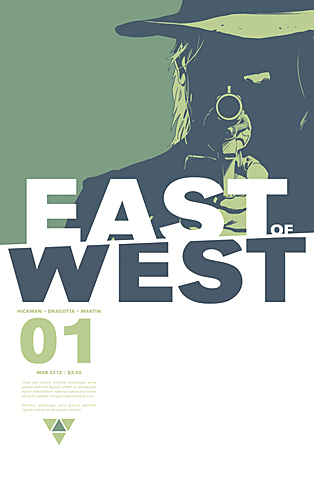 Bannen’s Book of the Week: I’ve been waiting for another book like Saga to come along – one that taps into an eclectic, original and vastly alien world. East of West is that book. With a mixture of Old West roots, alternate universes and futuristic cities, East of West firmly plants itself as a new contender for best Image book of the month, and it further goes to highlight the importance of independent publishers and their broad-based storytelling.

Jonathan Hickman certainly has a long string of science fiction titles to his name, so fans will instantly feel at home with East of West. But Hickman is careful to not dump his readers too quickly into the world. He uses archetypes of Cowboy movies – mesas, feather-decked natives, flat brimmed spaghetti-western hats and long, flowing dusters – to lay the foundation for a recognizable world that’s quickly turned on its side.

Amidst this retconning of America, Hickman sets the foundation for a story that delves into mystical elements like the Four Horseman of the Apocalypse and a giant white tower in which the president lives. His lead character, a gunslinger known only as Death, has a mean streak that has yet to be explored, but the bodies he leaves in his wake are enough to give him an aura of danger. Plus, we’re not really sure for whom we’re supposed to root, so readers are kept at a narrative distance that helps keep the world alien and the mystery solid.

Nick Dragotta’s art is the perfect visual for Hickman’s fictional world. His tight ink lines, sharp character designs and impressive detail make every page visually engaging. Frank Martin’s colors, particularly his picturesque backgrounds, aid the vastness of world, and their work in conjunction creates many strong and vibrant images. Specifically, Death steals every scene he’s in, partly due to his calm yet scary character and his striking white skin and suit.

East of West is a book with a grand scope and impressive individuality. I was immediately drawn in, partially due to my love of Westerns, but also because of the mixture of character and art. Some books are sure-fire picks every month. After one issue, it’s safe to say that East of West should be on your pull list.