I limit myself to nine lines now. Nine lines of around six words each and a title. I could use more, but I’d have to think of new ways to hide them.

I guess there’s only a certain amount of time you can stare out the window on your commute. There’s an old firehouse passed by the bus, a beautiful thing built before the First World War; seen it. My train takes me over high bridges with sprawling green pastures underneath; old news. 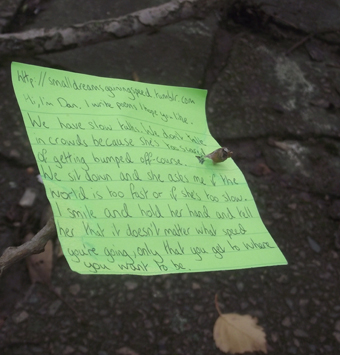 My batteries had died and my book was finished. I pulled down the table on the back of the seat in search of something to read. A left-behind newspaper. A receipt. A used ticket. Anything. I found a menu for the shop on board the train. I read each price and description before throwing it back down. I looked out the window again before looking back down at it. There was a white space on the back of it. Clear and blank and inviting.

I don’t collect everything in games. I never do. Nothing makes me feel more alone in a game that trudging through it and thinking: if I was the designer, where I would hide this thing? Where would be just annoying enough to reach?

Nothing reminds you more that you’re playing a game than roaming the world, watching a number increment by one over and over again. Just begging for something to make the empty world a bit more interesting. A bit less empty and a little more alive.

For every flag or agility orb or ceramic egg I collect, I think of a designer somewhere nodding their head, just thanking me for noticing.

For buses I tend to place it beneath the seat, or in between the side of a chair and the wall. For trains I usually go for the foldaway tray, maybe the menu. I’ve put them under empty coffee cups at Starbucks, on benches in parks, roofs of lifts.

I tear off the Post-it note, place it and walk away. I never look back.

I Am Alive came out last year. Do you remember it?

It was pretty good. It got hauled from the wreckage of a company called Darkworks whilst Ubisoft yelled from the backseat. Ubisoft got out unscathed and dragged it the rest of the way. Blisters and scars and all. It’s about a guy protecting a young girl through the post-apocalypse. He scrambles his way across the broken world, trying to find his wife and child, but in the process finding a scared, defenseless little girl.

You fight your way through the world with a single bullet and your wits and your bluffing technique. They don’t know you’re pointing an empty gun at them.

Along the way there were bad guys to kill and victims to find.

There’s a part of I Am Alive when you’re walking through a sandstorm, and you can hear someone somewhere crying out for help. Her voice echoes around the canyon of buildings you’re stuck in. Eventually you find her on a secluded rooftop, and she stops asking for you. The lady is now shouting at you to leave as three men rush towards you. If you’ve got the ammo to spare you can kill them, and then shoot the cuffs off the woman.

The woman gasps that she thought you we’re going to leave her trapped there. She tells you just a snippet of a sad story of how she got there. She stops talking and when you come back here next, she’ll be gone. 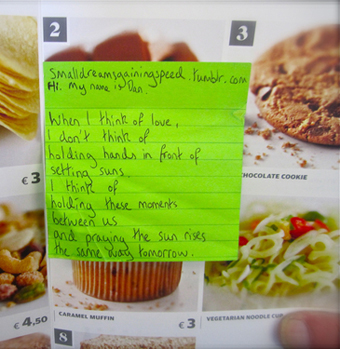 I walk away each time wondering why I do it.

I went to a school that desperately wished it was private. Same high school, too. Constant classes, constant work and individualism only granted to those who’ve earned it. Earned it in the way only a privately-taught student could. You learn stuff designed to be forgotten once you’re out the door. You suck up. You realize that there’s no point being different if no one else is the same. Sometimes, you get forgotten.

I smiled when I gave that guy his last cigarette. I desperately wanted to find that bottle of wine for that couple. I felt guilty for not giving that woman the food she needed. And I felt worse when I returned and she had hung herself.

I Am Alive fully commits to its tone of cruelty and desperation. It forces you to kill and dares you to feel guilty about it. It tells you, look, there’s a guy over there. He’s holding onto something. He’s not going to give to you, but you can take it from him if you want.

For its flaws and inadequacies, I Am Alive did something that no game has ever done. I actually wanted to ‘collect’ everything. And I felt cheated that I couldn’t.

I didn’t want the number to go up; I just wanted to hear how they got there. Stories of kidnaps for prostitution, for live bait, for food. Stories of rescue efforts gone wrong. Desperation and loss. Human stuff.

Stories of watching baseball on a summer’s day.

No one who’s ever heard what I do has gone on to do something like it. I wonder why they don’t just as much as I wonder why I do. It probably has something to do with the fact that the guides online about finding the victims always end before the victims tell their story.

They always take off, someone else to find. Another thing to collect. Another part of the world to see and feel. The problem is each part of it will forget you eventually. And you’ll forget it.

I can’t remember if that’s a bad thing or not.

I guess it all comes down to being remembered. Sometimes, I just like to know that I made someone’s walk through the world just a little more interesting.

I am Alive, Poetry