Written in Mission, Texas, February 1932; suggested by the memory of the hill-country above Fredericksburg seen in a mist of winter rain.

-Robert E. Howard on his inspiration for Cimmeria, home of Conan

It is on an appropriately gloomy day that I write about the sullen barbarian hero Conan, and the other creations of his equally sullen creator Robert E. Howard. With The Hobbit still somewhat fresh in my mind and a new season of Game of Thrones around the corner, it’s easy to forget about one of the first examples of the modern sword and sorcery genre. Unlike the professorial majesty of many of Tolkien’s stories (or quaint Hobbit whimsy), Howard wrote in a pulpy manner, freely imbuing horror, graphic violence, swordplay, nudity, magic, epic battles and humor into his tales.

A Texan fascinated with history, Howard traveled around the state in his youth working various jobs and even talking to Civil War veterans in old age homes to get inspiration for his stories and characters. These included Conan, Kull, Solomon Kane, Bran Mak Morn, and Irish characters like Turlogh Dubh O’Brien. His first entry into sword and sorcery was the Kull story “The Shadow Kingdom,” published in the pulp magazine Weird Tales in 1929. Still, of all Howard’s creations, Conan has had the biggest impact on popular culture, with movies, comics, video games, toys, a cartoon and a live-action TV show made about the man from Cimmeria. (In fact, it is said that early attempts at creating a Conan the Barbarian toy line based on the movie led to the creation of He-Man.)

My history with Conan begins, like many of my generation, with the Arnold Schwarzenegger movies in 1982 and 1984. The first of these films made a huge impact on me, while the second bewildered me with Grace Jones and Andre the Giant stumbling around in a rubber monster suit. I discovered the comics later, as I was devouring any kind of familiar comic book property that I could find. Eventually I bought albums by Danzig and others with cover art by Conan cover artist Frank Frazetta. By the late ’90s I was pretty burned out on the franchise and barely gave the TV show a thought; in the last five years I finally read the original stories, and since then my interest in the Hyborian Age has been renewed.

Know, O Prince, that between the years when the oceans drank Atlantis and the gleaming cities, and the years of the rise of the Sons of Aryas, there was an Age undreamed of, when shining kingdoms lay spread across the world like blue mantles beneath the stars – Nemedia, Ophir, Brythunia, Hyperborea, Zamora with its dark-haired women and towers of spider-haunted mystery, Zingara with its chivalry, Koth that bordered on the pastoral lands of Shem, Stygia with its shadow-guarded tombs, Hyrkania whose riders wore steel and silk and gold. But the proudest kingdom of the world was Aquilonia, reigning supreme in the dreaming west. Hither came Conan, the Cimmerian, black-haired, sullen-eyed, sword in hand, a thief, a reaver, a slayer, with gigantic melancholies and gigantic mirth, to tread the jeweled thrones of the earth under his sandaled feet. 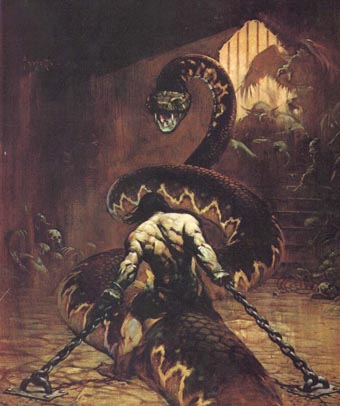 Much like Tolkien, Howard created a world and mapped it out. There was a history that included both Kull and Conan, and also borrowed from the work of Howard’s friend through correspondence, H.P. Lovecraft – it wouldn’t be out of the ordinary for Howard to include references to The Ancient One or for Conan to be attacked by some sinister slimy beast from the dark bowels of the Earth. While it bore similarities to our world, it was quite obvious that it was a world sprung from the fertile imagination of Robert E Howard; it’s very likely that Conan’s warrior god Crom even probably fought Cthulhu at some point.

It’s been amazing to look back and see how vast an influence the unfortunately small output of Howard has had on the fantasy genre as a whole, for better and for worse. Howard committed suicide in 1936 after a bout of depression brought on by the death of his mother, and it hasn’t been until recently that all of his work is now in publication. I’m optimistic that some faithful adaptations will be released either in movie or TV form, and although the recent Conan movie had its problems, talk of an elderly Schwarzenegger picking up the sword again leaves me cautiously optimistic. The stories have been around for almost a hundred years, and even when they were not in publication there were still comics and various adaptations keeping the character alive (my favorites of these are the Dark Horse comics written by Kurt Busiek). Here’s to another hundred years of high adventure.