One of the initial solicitations I read for The Bounce was something like, “A hero with a bong.” I thought, therefore, I would find myself reading a comic that glorifies pot and stoner antics (like Pineapple Express). 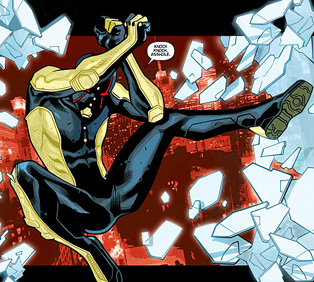 The Bounce is nothing of the sort. Instead, the comic is a surprisingly detailed story with an intriguing concept, interesting characters and impressive art. I recommend buying this book immediately!

The story is about a pot smoker named Jasper Jenkins. Jasper has an interesting superhero ability – he can bounce. Imagine a man made of rubber, and then imagine him throwing himself off the walls of a room. That’s basically Jasper’s power. But while the concept sounds silly, Joe Casey pulls it off. When Jasper first appears in costume, his ability proves remarkably impressive.

Plus, Casey has a clearly-fleshed-out world involving other superheroes, a salamander-eating scientist and a doorway to a world of people with powers. The comic only strays into usual ground once when it introduces its high-strung assistant district attorney, but besides this, Casey has an impressive amount of originality in his story. And the final page takes the comic in a completely different direction than expected.

Additionally, David Messina’s art is superb. His characters are impeccably detailed, and each image is rendered with the utmost clarity. The action sequences, in particular, are well done, and they perfectly capture Jasper’s ability to bounce off walls. While we haven’t gotten much of an explanation of Jasper’s abilities, we’re given a good idea of them when he fights a villain known as The Crunch.

The comic plays with the silliness of superheroes, but it also does a great job of establishing the fictional world in which they live. Any doubts I had about this series were allayed five pages in. The comic is definitely worth the time, and I can’t recommend it highly enough. 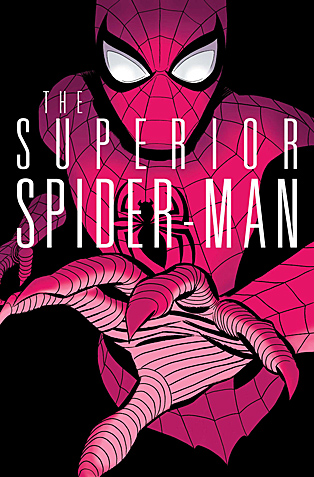 Ryan Stegman’s return to the art of The Superior Spider-Man is always a treat. His work, as usual, is fantastic, and this month’s issue is excellent for both its story and its visuals. Even if Peter Parker doesn’t exist right now, he’s definitely not missed in Superior Spider-Man #10.

After Peter was banished from Ock’s brain last month, his body is now purely controlled by Otto Octavius. The same grim violence we’ve seen before is on display again. Spider-Man is both vicious and effective, as he spends the issue beating the piss out of some of his villains.

Slott also gives us some time with Peter outside of the costume, and here’s where the series starts laying the seeds for its future conflicts. Because as much as people think Mary Jane is just a vapid model, she knows Peter Parker. And she knows when he’s not being himself. Bring in the clever and intelligent police officer, Carlie Cooper, and now Otto’s got a big problem on his hands – but one which he can’t see.

And as mentioned before, Ryan Stegman’s work is superb. The comic is a visual treat due to Stegman’s abilities. His action shots are always well done, and they capture Otto’s brutality. Furthermore, Stegman has a way of making caricatures of each person, so people who appear in the comic are uniquely defined. Villains, in particular, benefit from this.

The Superior Spider-Man is a home run this month. Otto thinks he’s banished Peter, and he’s been able to fool most everyone else (including the Avengers). But I like how Dan Slott utilizes the ladies in Spider-Man’s life to show that the people who know him best are his women, and they see through Otto’s attempts at playing the role. I’m torn because I want Otto to be found out, but at the same time Spider-Man is better for having Otto in control.

And Dan Slott is a genius for creating this conflict. 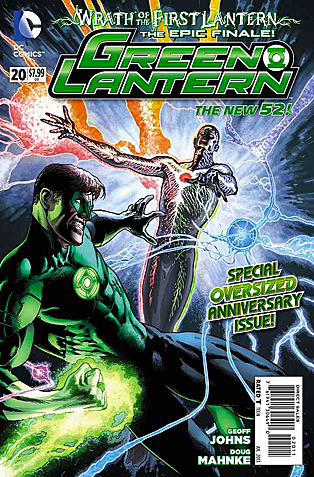 Bannen’s Book of the Week: This month’s issue of Green Lantern concludes Geoff Johns’ nine-year run on the comic. At 60 pages in length (and a whopping $7.99), Green Lantern #20 is an epic, touching and unbelievably brilliant end to one of comics’ greatest-written series.

Johns writes the comic in the vein of The Dark Knight Rises, providing closure to every aspect of Hal Jordan’s life. The result is that Johns gives us not only the end of the “Wrath of the First Lantern” arc, but he also gives us an end to the entire Green Lantern Corps. Johns ties up every loose end, bringing the series full circle and redirecting it back to its roots in Green Lantern: Rebirth.

Green Lantern #20 is also a return to form for Johns, who crafted such epic series as “Sinestro Corps War” and “Blackest Night.” Green Lantern #20 runs in the same circle, making itself a grand tale both in its action and characters. You’ll have no doubt by the end of the issue that Hal Jordan is the greatest Green Lantern ever.

The issue is all action, and it uses an elderly Sinestro as a narrator. The result is a distance from the time depicted in the comic, and the time from which we learn about it (as shared through the eyes of a newly-inducted Green Lantern). Johns also goes back to “Sinestro Corps War” and “Blackest Night,” resurrecting both the Sinestro Corps and Nekron and utilizing both to create some harrowing character moments. While the First Lantern’s end is a bit anticlimactic, getting to his defeat is totally worth the wait. Plus, Johns gives Hal some closure on his relationship with his father and the incident which pushed him towards his role as Parallax and the destruction of the Green Lantern Corps.

And the art! It’s evident why Doug Mahnke took a break from Green Lantern for the past few issues. He needed all of his time to draw this one comic – and the result is stellar. Every panel is expertly detailed, and every character is rendered with the utmost care and precision. The imagery never loses its clarity, and Mahnke gets to draw some impressive and heroic poses for Hal.

Additionally, Alex Sinclair and Tony Avina color every page of the issue, and both of them deserve an award for their work. In fact, every person who contributed to the art of the book should be congratulated, because no image looks out of place, weak or blurry. Everything about the book is geared towards making it the greatest of endings for one of comics’ greatest heroes.

And I have to admit to being sad to see Johns leave Green Lantern. His work redefined the character and built a new fan base of impressive proportions. He definitely caused me to tear up because his work is really unparalleled. Seeing Johns step away from the writing duties is like saying goodbye to a good friend. I feel like, over the years he wrote Green Lantern, we forged a relationship with him because he wrote comics for people who love comic books.

Truly, in the pantheon of great comic writers, Geoff Johns is a first ballot selection, and Green Lantern #20 is more proof of that. It’s hard to say goodbye, but if we need proof of his greatness, we have this comic.