Growing up, I read about Jean Grey’s sacrifice so that the Phoenix would not consume all. I read in horror as the Joker beat Robin to a bloody pulp with a crowbar and then blew the Boy Wonder up for good measure. I read as Aunt May confessed to her nephew, Peter Parker, that she knew he was Spider-Man right before she passed away. All of these climactic moments ended a story, but they weren’t the end.

The X-Men mourned Jean’s loss and went on to protect a world that fears and hates them. Batman mourned the loss of his partner and went on to battle his rogues gallery and save Gotham City. Spider-Man went on to—well, he went head first into the infamous Clone Saga. Uh, yeah. 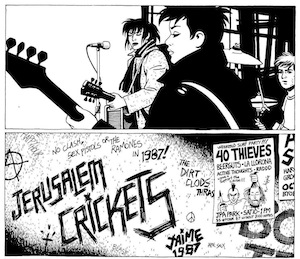 2012 marked two landmark anniversaries in comics. As of this year, Los Bros Hernandez (Gilbert and Jaime) have been creating Love & Rockets for 30 years and August marked Spider-Man’s 50th anniversary, respectively. At first glance, the two series couldn’t be more different. Spider-Man webslings around New York City, catching thieves like flies, while Love & Rockets is a book with (mostly) two overarching narratives as well as numerous short stories. The Hernandez brothers started self publishing in 1981, but Fantagraphics has been publishing the series since 1982. Gilbert’s Palomar stories and Jaime’s Hoppers 13 (or Locas) stories are the most prominent stories.

Palomar is the story of a fictional Latin American village and inhabitants, mostly a woman named Luba. Palomar, and has a sort of magical realism literary style. Hoppers 13 follows the lives of a group of Mexican-American characters from their teenage years in the California punk scene to the present day (with some sci fi trappings). The Hoppers stories tend to focus on Maggie and Hopey.

I came to Love & Rockets later in life. I was in my mid-twenties and out of college by the time I got to know Maggie and the cast of Hoppers.  I dug the Palomar stuff too, but I was drawn more to Jaime’s Southern California punk aesthetic. I’d heard about Love & Rockets a lot earlier, as the comic store I shopped at as a kid was very indie friendly. (Hell, I had a better chance of finding an issue of Eightball there than I did the latest issue of The Amazing Spider-Man sometimes.) However, I was mostly concerned with superheroes at the time, so I’d track down those Spidey comics until shortly after Amazing Spider-Man # 400. 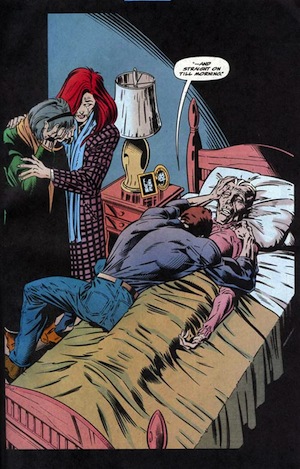 Amazing Spider-Man # 400 was one of the most touching comic books I’d read up to that point. There is nary a supervillain in site for the whole issue, actually. It starts with Spider-Man web slinging to the hospital, expecting to hear news that some new tragedy had already befallen his comatose Aunt May. However, when Peter arrives at the hospital and discovers May is awake and she is ever so pleased to see her nephew.

What follows is Peter Parker and May Parker’s last week together. It culminates with May confessing to Peter that she’s known he was Spider-Man for most of his career as the wall-crawler. She tells him how proud she is of him and a few hours later, she dies in her Forest Hills home. It was a touching end to their relationship and considering the story that followed, it felt like the right place for my 15 year-old self to move on from Spider-Man (for nearly a decade, actually).

Aside from the first 200 issues or so, Spider-Man didn’t quite age in real time, but there was a definite progression in his life. He went through high school and college. He even got a post-graduate degree, if memory serves. Since then though, Peter’s been stuck in a kind of endless twenties. Today, 50 years after his first appearance, he’s kind of like Matthew McConaughey’s character in Dazed and Confused. We get older, but Peter Parker stays the same.

The characters in Love & Rockets, however, have grown in an almost real time. As someone who has gone back and started reading the Fantagraphics collections, it’s amazing to see how Maggie, Hopey and company have changed over the years. I looked at my copy of the Maggie The Mechanic collection and the recent Art of Jaime Hernandez, which collects Jaime’s New York Times Magazine strips and marveled at the difference.

Neither Spider-Man nor Love & Rockets seem to have a particular end in sight. They are serialized narratives and thus, have the concept of continuation built into them. Sure, the Hoppers and Palomar stories will probably end long before Spider-Man, but the thing is, their worlds are still open to the near limitless potential the artform of comics offers its storytellers.

Other’s have written much more eloquently about Spider-Man’s anniversary, most notably Tom Spurgeon and David Brothers, and the AV Club ran a fantastic interview with Los Bros Hernandez about their 30th anniversary. They’re fantastic pieces and I urge you to check them out if you already haven’t.