The first time I ever encountered Dave Sim’s anthropomorphic aardvark-in-a-vest, Cerebus, was in Spawn #10. Sim was guest writing the issue and Todd McFarlane was still doing the art. It was the second issue of Spawn I ever picked up, after Neil Gaiman’s wonderful guest spot writing issue #9. Issue 10 deals with comic book creator rights, and the characters Spawn and Cerebus are more like Sim and McFarlane than their usual selves. Young me did not know this; I just thought that the characters were teaming up for a one-off issue with some subtext pertaining to creators and their creations. I figured the stories were always like this, with melodrama and insanely dense writing. When Al Simmons is reunited with his family at the end I thought something in continuity had happened. Rereading years later, I’m still moved by the entire story, even if it was just “a very special issue” of Spawn. This emotional issue led me to pick up more Spawn, and thanks to a friend years later I embarked on the quest that is Cerebus. A quest that for Dave Sim led to madness on and off the page. 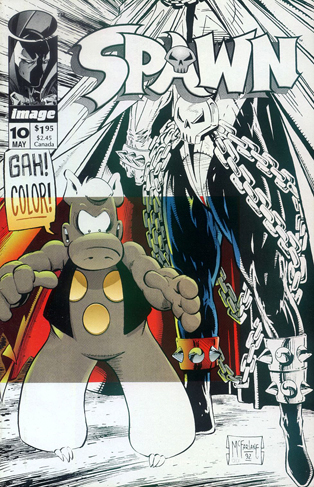 High Society is book two of Cerebus, and the individual issues have recently begun to be reprinted digitally. I’ve picked up the first five, and to be immersed in that world again is still rewarding. It’s a shame that in the back of my mind I know how it ends, and how in the summer in high school when I first started reading them Sim still had roughly 100 issues of his 300-issue run left. How did I know that the series would end at issue 300? Because the comic world at large had known this since 1979, when Sim announced it after being hospitalized by events brought on by his constant LSD use at the time. It can be argued that the sharp turn from parody into politics, religion and philosophy began around this time and was the inspiration for the massive story arc from High Society through Church & State volumes 1 and 2. By the time you get to the end of book five, the heartbreaking Jaka’s Story, you could say that the storytelling phase of Cerebus is over, much as High Society ended the parodic Conan the Barbarian stories of the early days of the series. It is from this point on where things get weird.

First off, the book Melmoth features Oscar Wilde as the main character, not Cerebus. From there is the epic four-book “Mothers and Daughters” saga, individual issues of which I actually picked up when they first hit comic book stores in the early-to-mid ’90s. When I finally completed the ninth book, I heavily contemplated dropping the entire series. In many ways I wish I did, even though there are great character moments in the books, Minds, Guys and Rick’s Story. The ninth book, Reads, features two dense sections of just text. Sim basically takes the opportunity to espouse on his “anti-feminist” beliefs of men as the form and women as the void, men as the creator and women as the destroyer. At this point in the story, the city-state of Iest, where much of Cerebus takes place, has been overtaken by a female religious group known as the Cirinists. The mothers of the “Mothers and Daughters” equation, Cirinists are covered head to toe like nuns and enforce any laws that require obedience from men, with severe penalties if these laws are broken. Women are also punished for acts such as abortion and what is deemed indecent. Basically, a bunch of women are bossing everybody else around. At this point I’ll mention that during the run of Cerebus, Sim went through a divorce with Deni Loubert, the woman he co-founded Aardvark-Vanaheim with and who initially ran the business end of the company. Aardvark-Vanaheim published Cerebus for its entire run.

In real life, Sim made no secret of his beliefs in interviews and eventually withdrew himself more and more from friends and family. He even said in an interview with The Comics Journal that the proper story ends with issue 200. After that, Sim essentially wound down his book with many random musings, biographical tangents pertaining to subjects such as Hemingway and The Three Stooges, unreadable pages of text and rambling, a religious epiphany where Sim adopts the religion born from his comics and finally the sad conclusion of the story where a twisted and decrepit Cerebus finally gives up the ghost, as promised would happen in the 300th issue. Many would say twisted and decrepit was an apt description for the state of Sim’s mental health at that point. 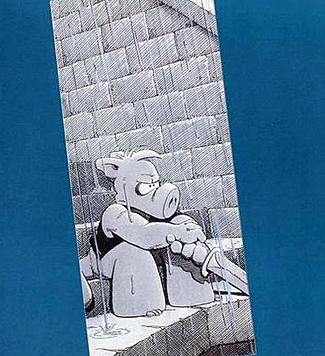 It’s hard to deny that there is plenty worth checking out in those early volumes, though. I will heartily defend books two through five and even the fun book one as a solid reading experience from a genuinely revolutionary title. If it wasn’t for Sim and his influential work towards creator’s rights, much of the indie comics world would not be what it is today. People like Jeff Smith of Bone fame and Terry Moore of Strangers in Paradise cite Sim’s work as an influence, even though they no longer call him a friend.

It’s sad when vibrant creative energy turns to lunacy and producing mad rants full of hate. There is much speculation as to whether Sim’s mental breakdown and eventual divorce from his wife was the root of all this. Some say it was even the LSD overdose that hospitalized him that may have been the cause of his mental collapse. It was most likely that the young creative prodigy was prone to mental illness and took his once vibrant creative platform and used it as a soapbox for his crazy ramblings. At one point, Cerebus was a shining beacon of what could be done with independent comics, and it still is in those early books. Unfortunately, by the end of the series the once successful title went out with an eerie silence from the comic book community.

Dave Sim claims that when he dies the Cerebus property will be public domain. I dream of good coming out of the stories of the life adventures and love of a barbarian/prime minister/pope aardvark. In my mind, it would be a lovely trilogy of fantastic animated movies, one that would tell the main story and end before it tried to complete the fool’s quest of meeting an arbitrary goal with filler and rants. At some point, maybe the art can be separated from the artist, but for now the art is still tainted.