Mostly everyone knows of the legend of Rasputin. My first knowledge of the man came from hearing about his odd end, and how he was poisoned, stabbed, shot, thrown out a window and drowned. The version I heard, though, is that he died of exposure due to the cold, and not due to any of the other murderous attempts on his life. Regardless, Alex Grecian takes a look at Rasputin’s origins in a comic that attempts to tell the story of Rasputin, from his mysterious beginnings to his equally mysterious end. 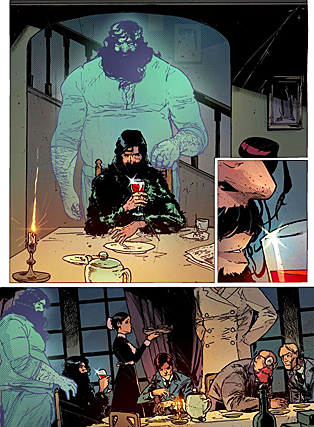 Grecian starts his story by telling of Rasputin’s childhood. I don’t know the true origin of Rasputin, but in Grecian’s version, the boy grew up in an abusive home, doted on by the mother who at least loved him in opposition to the brutish father, who drank too much and beat his family. This is all delivered very perfunctorily. There’s nothing much surprising about the writing, which is a bit disappointing. The comic is intriguing due to its main character, but the writing doesn’t go beyond what’s expected. Nothing really surprising occurs.

Where the issue is worth its price of admission is in Riley Rossmo’s gorgeous art. He has a very unique style, one that has echoes of an unkempt Russell Dauterman. If Grecian is trying to make Rasputin a relatable villain, Rossmo is the one who brings that concept to life. His style is somewhat cartoonish, but edgier. His set pieces are tonal beacons, as whatever feeling Grecian aims for is delivered by Rossmo. The simple color palette used by Ivan Plascencia is weighty for how minimalist it is. I couldn’t stop looking at the comic long after I read it, and I’m not doing the art justice. Trust me when I say that you need to pick up a copy for yourself, because the visuals are what make the comic worth reading.

I’m intrigued by Rasputin because of the history of the character. Grecian is a solid writer, but he hasn’t given us anything we didn’t expect or didn’t know about. But I’m on board because of Riley Rossmo. The imagery of the book makes reading it all the more fun, and I can’t wait to see what else he does. I’ll follow Rasputin, more for the art than the story right now, but hopefully that will improve as the comic tells more of Rasputin’s twisted history. 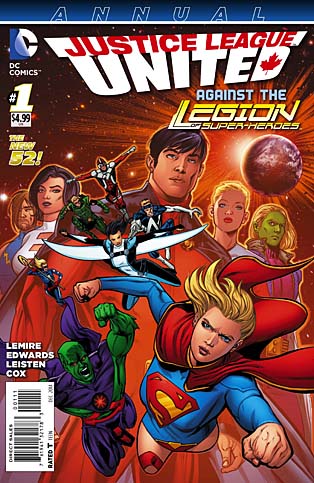 I have to confess that I haven’t been following Justice League United too closely, but I took a chance on the book for one reason: Jeff Lemire. Lemire, to me, is a proven talent. I’ve been drawn to his writing since Sweet Tooth, and I loved his work on Animal Man, so I didn’t feel like I was taking much of a gamble. I’m glad I gave Justice League United a shot, too, because while the comic has its flaws, it’s tightly written and a great starting point for casual readers like myself.

The issue is the beginning of a storyline titled “The Infinitus Saga,” and it involves the JL United plus the Legion of Super Heroes. Lemire finds a way to fill in the backstory of the team early on, so the majority of the comic is spent on building the conflict. Lemire basically splits the tale into two parts: the first following Martian Manhunter as he tries to protect Ultra, an alien super-hybrid, and the second following Green Arrow, Supergirl, Animal Man and Star Girl as they search for Hawkman’s body.

The parts with Martian Manhunter are the best written, as they have the Legion of Super Heroes as well. Lemire is able to combine some pretty heavy exposition with solid characterization, so the story never lags, despite its density. The other half of the comic, however, is meant to throw a little levity into the situation with Animal Man playing the comic relief. Unfortunately, a lot of his jokes just fall flat. Plus, Lemire is setting up a conflict between Green Arrow and Supergirl, but the dispute is never fully fleshed out. This will probably come into play later, but the seeds are so overtly planted that we’re practically beat on the head with them.

Furthermore, I don’t buy into Supergirl being a hotheaded, quick-to-action person considering how she was originally portrayed by Michael Green and Michael Johnson in Supergirl. The character shift is a bit much to take, but again, I’m not a full-fledged Justice League United reader, so this may be how Lemire has been portraying the character all along. But other than this minor gripe, I loved the buildup to the climax. Lemire’s pacing is pretty stellar and the final reveal is enough to invoke excitement for the future of the series.

Credit also goes to Neil Edwards, whose clean style aids the intergalactic setting of the comic. Character designs are sharp and polished, and his close-ups are works of art. Jay Leisten provides the lush inks that smooth the visuals, making for an aesthetically pleasing comic. There are a few hiccups, though, and these are mostly around the composition. A few times, character’s hands are misshapen. Martian Manhunter, at one point, looks to have boulders for fists (but this could be to his ability to shape shift). And a few times, Edwards’ images spill into other panels. This isn’t often a problem, but more a distraction, especially when it conflicts with the imagery in the other panels.

These critiques aside, I really enjoyed Justice League United Annual #1. I’m more willing to become a constant reader after this issue, as I think Lemire has a cool plan for the series. “The Infinitus Saga” is a great place for new readers to come aboard, so if you’re looking for a new title to get into, I’d suggest Justice League United. I think the effects of this series are going to felt throughout the DCU. 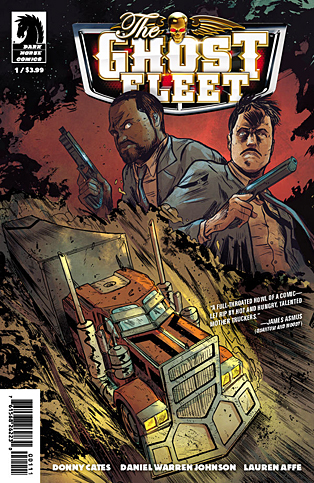 Donny Cates and Daniel Warren Johnson deliver a badass, action-packed first issue! The story starts with the fleet’s secret origins, then moves to the present as Trace and Ward argue about whether Trace is a match for Ward’s wife for a transplant. Trace takes their partnership seriously and personally and wants to help his partner. However, the discussion is tabled when the aforementioned attack happens.

Ghost Fleet #1 is exciting! Once the action starts, it keeps moving. It reads like a love letter to ’80s action movies like Big Trouble in Little China and Die Hard and exaggerated gore-fests like Toxic Avenger. Cates and Johnson don’t shy away from the blood, either. There’s a scene involving a dude with an RPG rocket launcher playing chicken with the fleet’s truck that ends as graphically as can be expected – and it’s awesome.

Johnson’s art paired with the lettering in this comic is something else! The crash effects blend into the art, heightening the action. Johnson’s storytelling and character acting weave between the chase and the action. As big as the book’s action and violence gets, it’s the subtle work Johnson does showing us who Trace and Ward are that ties this book together.

Cates and Johnson build an entire world, establish their protagonist and proceed to tear that world down over his head by the end of the issue. I’m so glad this book is an ongoing because I can’t wait to see all the places Trace and Ward are going to go. 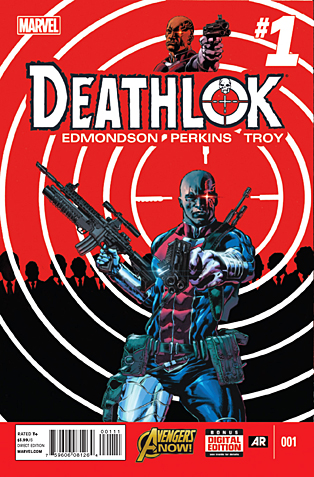 Deathlok is a jerk. While I’m most familiar with the more cyborg zombie Luther Manning version of Deathlok, I have a vague grasp of some of his other incarnations, and at least in Manning’s case I always found him to be a jerk, too. He doesn’t have much personality – he’s a cyborg and he kills people, which is a saturated field in the Marvel Universe. Thanks to the TV series Agents of S.H.I.E.L.D. , interest in the character is up, so Marvel is rolling out a new Deathlok series, with nice guy Henry Hayes being duped into being the jerk assassin.

This version of Deathlok is closer to how he’s portrayed on Agents of S.H.I.E.L.D. and features a character introduced in the Original Sin miniseries. Henry Hayes has no recollection of any of his missions of mass murder and explosions, and for all he knows he’s helping people out as part of Doctors Without Borders, thanks to false memory implants and memory wipes courtesy of his employers. He has a domestic life as Henry Hayes, with a daughter who’s a typically jerky teenager. When he sets out on what he thinks are missions of mercy, something is switched on that turns him into a murderous asshole.

Nathan Edmonson does a serviceable job writing what is basically a bunch of action sequences, with quick domestic breaks in the Hayes house and a subplot involving a S.H.I.E.L.D. agent tracking him down to break things up. Mike Perkins does a great job drawing these action sequences, including one magnificent splash page of Deathlok being picked up by a helicopter after a successful mission. Even colorist Andy Troy should be commended for little details such as the Deathlok uniform to possessing similar color shades to the classic Luther Manning uniform. Everybody does good work on this comic, but still I’m left shrugging my shoulders after finishing the issue.

Maybe it’s because I never was a huge Deathlok fan (though I loved the action figure that I had of him back in the day), or maybe I’m just bored with the concept of this comic, which is very similar to the Valiant series Bloodshot. He shows up, kills everybody, shoots an innocent woman’s phone like a jerk does, blows shit up willy-nilly, then disappears. He also kills Black Tarantula randomly, and it’s all done in a very bland and flavorless way. Is this wash/rinse/repeat cycle what we have to look forward to for issues to come? There’s no cliffhanger at the end to make me want to pick up the next issue, and weirdly this guy is never referred to as Deathlok at all during this one. Are Luther Manning or somewhat more recent Deathlok Michael Collins going to appear from behind a corner and shoot this guy randomly in the head? That would at least be interesting.

There have been many takes on the Deathlok cyber-soldier over the years, and while I find the concept of murderous cyborgs interesting, I’m hoping there’s a little bit more in issues to come. Also, give this cyborg some more personality; it seems like they’ve left him switched on to “Shithead Mode.” It makes you wonder what C-list hero will be promoted to their own series next via Agents of S.H.I.E.L.D. While I always hold out my crazy hopes that the answer is “Darkhawk,” only time will tell.