At first glance, atebits’ Letterpress looks like any other simple word puzzle game. Maybe a two-player version of SpellTower. Maybe just another version of Scrabble or Words With Friends.

But after playing it, what Letterpress most evokes in me is not any other word game, but a sensation of two boxers in a ring, each dancing around the other round after round, tiring each other out with quick, defensive jabs. Eventually, one falters and the other immediately lands an uppercut and obliterates his opponent. 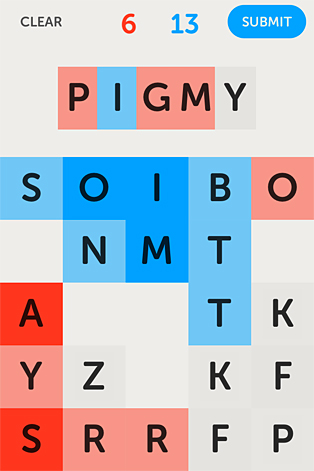 Two players start with a colorless 5×5 grid of letters, taking turns using the tiles to produce words. The letters used don’t need to be adjacent and can be taken from anywhere on the board. Once a player submits a word, those tiles are painted blue. The other player does the same, and those tiles are painted red. Using a tile painted the other player’s color will capture it for your own color. Turns go back and forward until the last tile is painted, and whoever has the most tiles at the end of the game wins.

The strategy enters in with defendable squares. Capture a letter and all the letters adjacent to it, and it will be colored a darker blue, meaning your opponent can’t capture it. He can still use that tile to produce words, but it is going to stay blue for as long as the adjacent squares are also blue.

Each game typically starts with each player capturing a corner – the easiest squares to color a darker shade. From here, each player pushes his territory outwards, darkening as much of an area as he can. After an initial rush to grab territory, the game usually slows with only three or four unpainted blocks left. Turns then go back and forth, blue grabbing red’s tiles and red grabbing them back. Each tries to find that particular word that will give that upper edge and let the player go after some of those final tiles without losing ground. And then one player finds a word that will use every remaining letter and put him into the lead and, just like that, it is all over.

Other games are over from the start. One player might capture the board’s few vowels, creating an impenetrable fortress and forcing the opponent to rely on tiles he can’t capture, greatly hindering any offensive capabilities. The best thing you can do in such a situation is to paint tiles as quickly as you can and just end your suffering.

In either situation, what makes Letterpress so fresh and so much more thrilling than just another word game is the strategic capturing of territory. Yes, you need a keen eye and a keen vocabulary, but you also need a sense of the strategic and territorial. You need to be able to set up defenses while also launching attacks at your enemy’s walls. More than a word game, Letterpress is an enthralling turn-based strategy.

The Storm is Coming