As soon as the wind started to pick up ahead of Hurricane Sandy, I went out for a walk. The sky was overcast and glowing white as raindrops whipped through the air and a crisp lash of cold snapped at me. 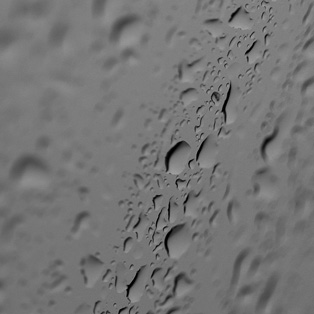 There is a very real physical sensation that accompanies an oncoming storm: the barometric pressure – quite literally the weight of the sky upon us – drops. My cat becomes very skittish when this happens; it makes him seem less sure of his surroundings, like everything is malleable and in flux. It makes me feel the same, but where he is subdued, I am exhilarated.

A violent storm is the only time the weather is worth noticing. I don’t have any memories in which clear blue skies or bleak grey drizzles figure as prominent features. But storms…

When I was little, I would sit with my grandfather in his garage with the door open wide to watch the thunderstorms usher in the summer twilight. The dark clouds rolled in, the light turned green and the sky rumbled as the rain line rushed down the driveway at us. And then they’d be gone, as quickly as they came, the thunder replaced by the chirping of crickets.

In 1999, driving rain from Hurricane Floyd got into the electrical panel of the corporate photo lab where I was working. The building was over 100 years old and the wiring probably not much younger – the leak fried something and the offices began filling with black smoke, which drove us all into the rain, wind and rising floodwaters of the Passaic River two blocks away.

Ten years later, I was standing on the rocky coast of Gloucester, Massachusetts, watching the tide pound in, driven by a furious nor’easter. The waves hammered like artillery fire.

The Christmas blizzard in 2010 caused a holiday party to be cancelled, but my friends still had a goose that needed roasting. Not one to let food go to waste, I trekked out in the first hour of the storm, when the snow was only six inches deep. When it was time to return home, the snow was almost three feet deep with drifts even higher. Where a hurricane is sound and fury, a blizzard is about silence and eerie brightness. I passed a man going in the opposite direction, but didn’t see him until he was almost in front of me. If I had a flare, it would have been just like John Carpenter’s The Thing.

Melmoth stalked the cliffs over the stormy sea to challenge nature and poets ever since have followed his example. A storm is about extreme change oscillating and reverberating, energy building and releasing. It’s about power, potential and ferocious beauty. These are all deeply human things.

Assassin’s Creed III captures some of this during its naval scenarios. As Connor pilots the schooner Aquila down the Eastern seaboard and across the Caribbean, the weather is alarmingly mercurial. In good weather, rogue winds or waves are a constant threat, but worse are the squalls that spring up in the blink of an eye. The sky turns black, wind claws at the sails and the dark sea swells with hunger. To survive is a victory of the wits and will.

The first book I read for pleasure was The Dark Secret of Weatherend, by John Bellairs. It is about a teenage boy, Anthony, and an elderly librarian, Ms. Eells, stumbling upon a plot to wipe out the human race by magically controlling the weather. The sorcerer, who goes by the delightful name of Anders Borkman, has several moments of moustache-twisting villainy, during one of which he says, “I prefer turbulent weather – storms and lashing rains and raging seas. I suppose my tastes are odd, but I feel that such weather rouses the spirit within one. It tests one’s mettle.”

Hurricane Sandy knocked my power out at about 6 p.m., while I was deeply preoccupied with playing Assassin’s Creed III. I wasn’t very far, just enough to be hooked on its simulated mettle-testing, and I immediately went into withdrawal. If there was some irony in the fact that I was staring expectantly at a black screen, wanting to get back to a game set in an age before electricity, it was lost on me. 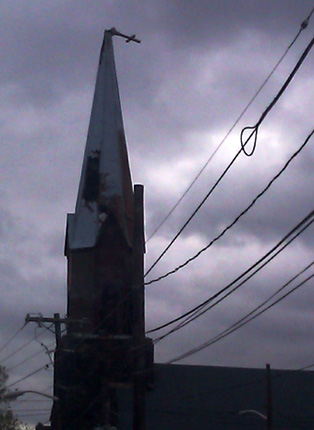 Soon, with no electronic distractions, I became overly aware of the sounds outside. Some of those sounds demanded to be investigated and I found that simple tasks like fastening a gate or chasing the garbage cans down the alley became Herculean feats. With nothing to occupy myself with inside, I stayed out in the rain, cold, ears ringing with the howling wind.

The first tree went down at about 7:30 p.m. The second, directly in front of my house, fell about 20 minutes later, into the street rather than my living room. After that, there wasn’t anything too serious to worry about, unless the storm decided to tear my roof off. I stood in my front yard, flashlight in hand, and watched the red sky flash with green and yellow and purple as transformers exploded, one after another, until I lost count.

In the morning, I walked. I picked my way over fallen branches and avoided downed power lines. I visited friends and we surveyed the destruction together. We weren’t badly hit in Kearny, but with the power off, it would be a few days before we saw how badly South Jersey fared. The tempest is a crucible, and we came through it. This time.

The old books say the end will come in fire, but they’re wrong – it will be wind and rain and lightning and hail. But even when the Last Storm comes, there will be at least one person standing out in it, laughing in the wind and thumbing their nose.

Stu Horvath paid for his arrogance in the face of nature with a dreadful head cold. Offer him a tissue on Twitter @StuHorvath. Photos by Stu Horvath. The Burnt Offering isn’t done with Assassin’s Creed III yet – come back next week as we talk history, politics and perspective.