As one of three wrestling aficionados for Team Unwinnable, I can be a harsh critic when it comes to wrestling games. Wrestling games shine when presented on a bigger playing field like a PS3 or an Xbox 360 and even though I played just about every hand held game, wrestling on the go is too limiting and never comes across as well-realized as it’s big system counterparts. 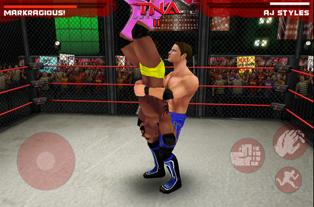 TNA Wrestling Impact is the company’s second game in the mobile market, though I’m not sure I can call the first game a true wrestling game as it was turn based rather than real time. You have to give TNA credit for being the only wrestling company with two games available for mobile devices and, this time around, I think they have a winning formula with the help of Namco Bandai.

The base of most wrestling games and fighters is the control set and even though the controls on an iOS device are limited, they work well with the format. To the left of the screen is a virtual thumbstick – one of the more accurate ones I’ve encountered. To the right are three virtual buttons; a strike button, a grab button and a run button. Other buttons seem to be context sensitive and appear when your character is near an area like the ropes or a turnbuckle. Reversals are pulled off by pressing the corresponding button while being prompted by the game.

The wrestlers have a small move list to draw on but there is variety in respect to the type of move that can be pulled off, whether it’s performing a moonsault over the ropes to the outside or suplexing a guy off of the turnbuckle. Everyone has their signature special as well and, while I never managed to pull off a Five Star Frog Splash I was the victim of many Black Hole Slams courtesy of Abyss.

Modes are limited as well, but given the platform, understandable for a first offering. There is a career

mode which lets you take the path for the tag team, x-division and heavyweight belts. Exhibition-wise, there are singles, tag team, cage, no disqualification, submission and falls count anywhere matches. I would have liked to see the signature Ultimate X match as it is one of the most exciting matches to watch. The roster is well balanced with veterans like Sting, Ric Flair and Hulk Hogan and rising stars like Jay Lethal, Samoa Joe and A.J. Styles. Unfortunately, Impact runs afoul of the a roster issue that extends across all wrestling games – by the time they come out, half the roster is gone.

The character models look good and I especially liked the fact that they used real theme music and entrance videos. We’ve come a long way since the MIDI days. They also include a sparse create-a-wrestler mode and despite a minimum amount of customization pieces, you can still manage to make an interesting character.

I was a tad bit thrown off when it came to naming my character. I have a go-to custom character that, besides being a virtual version of myself, has graced many wrestling games. His name is El Satanico. The game actually blocked me from using this name and forced me to use a new name. What confused me even more was that it accepted Diablo Negro. 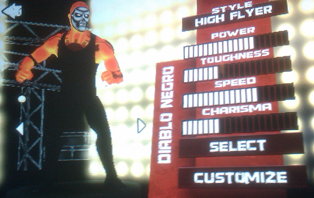 The iOS version has Game Center support as well as multiplayer over WIFI and Bluetooth, giving it an edge over the other versions. Cross the line and pick up TNA Wrestling Impact for iOS, Android, J2ME, Java, BREW, Windows Mobile and RIM – and don’t forget to tune into Spike to catch your favorites on Impact Wrestling every Thursday!

Running the Gauntlet at the Museum of the Moving Image