While issue #0 of Green Lantern introduced Simon Baz to readers, issue #13 attempts to create some history to the character as Geoff Johns tries to give readers something to relate to in the absence of Hal Jordan and Thaal Sinestro, as well as the impending “Rise of the Third Army” story. The results are a mixed bag of mysterious occurrences and character moments leading up to a fantastic cliffhanger that will definitely have readers back for the next issue.

Geoff Johns tries to inject humanity into Simon Baz’s life through his sister, Sira. Mentioned briefly in issue #0, Sira is given more developed character moments in this issue than Simon, who is just tossed from scene to scene. Strange occurrences, including a cryptic and scary message from Hal and Sinestro, pepper the book so that in the end, we’ve learned nothing new about why the ring chose Simon, nor why it appears to be such a chore for him to wear it. 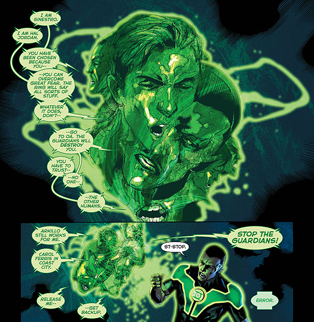 Simon’s moments with his sister are the heart of the book. While Johns uses Simon’s terrorist accusations as a plot point, he deftly conveys the emotions many Muslims must feel while being shunned because of religious and cultural stereotypes. In these moments, it’s evident why Johns went with an Arab as his lead character. The isolation Simon feels is evident in both his newness as a Green Lantern and his struggles as an Islamic man.

My main critique is really about the designs of the Third Army Green Lanterns. They’re just a bit too alien for my tastes. They look like a mixture of every horror movie alien design. And I bring this up because Doug Mahnke’s character designs are awesome. He has the ability to illustrate with almost photorealistic precision, and the smoothness with which he draws his human characters is one of his greatest assets. And when Baz finally appears in full Green Lantern garb, he is powerful and sleek-looking. The final page, where Simon encounters other heroes curious about his existence, is drawn so well that I wish Mahnke were the illustrator on Justice League.

Geoff Johns is definitely going for the slow burn on this one, and while the comic can be frustrating to read, the mystery is definitely intriguing. We haven’t seen Baz fully powered up yet, but I’m sure those results will be pretty fantastic. He’s becoming better developed with each issue, so I hope he’ll become a mainstay of the Green Lantern. We’ll have to wait and see what happens. For now, we’ll have to see what Simon Baz can do with the most powerful weapon in the universe. 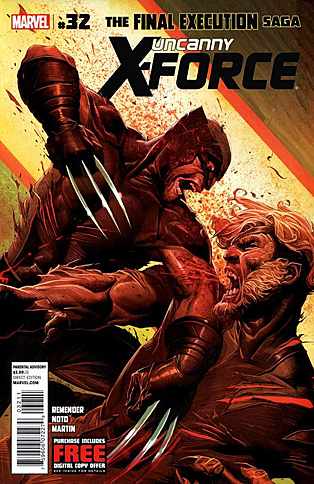 I’ve been lucky enough to have been following Uncanny X-Force from the beginning, so where Apocalypse was billed as the villain to end all villains, seeing his arc come full circle has been very rewarding. Issue #32 pushes the heroes further towards the brink, but in a way that makes this comic hard to read – in a good way – because of both the state in which Rick Remender leaves the heroes and in Phil Noto’s fantastic art.

One of things Remender has always done well is to write an interesting Deadpool. I’m not a fan of Deadpool regularly, but in Uncanny X-Force, he’s been an agent of humor as well as an occasional – and scary – voice of reason. Here, Deadpool sees a way towards redemption, which makes for one of the most interesting dynamics of the comic. As much of the story is narrated by Wade, Remender shows readers a depth to the character that was not always evident, even if it was present.

And the character moments are the best part of the story. Not only do we get to see Deadpool being heroic, but the Age of Apocalypse Nightcrawler meets with a very convincing Mystique, and Wolverine and Betsy attempt a daring rescue for a captured Wade Wilson. All of these moments tie up in a neat climactic finale, but Apocalypse has yet to get into his garb. When that happens, however, heads will roll.

Phil Noto’s art is really the highlight of the issue. Much like Stefano Caselli, Noto goes for smooth finishes and softened shadowing and outlines. This makes character designs sharp and even. Frank Martin’s colors come off as vibrant because of this, even though they’re on the drab side of the palette. The addition of motion lines hurts some of the images, only because the lines feel forced, as if the reader couldn’t visualize the action for himself. This is a minor critique, however, as it rarely distracts from the art.

I’m sad that Remender is leaving this book, because he’s done such fantastic work (the “Dark Angel Saga,” in particular, is probably a watershed moment in his career). But Remender is bringing all of his ideas together for an explosive ending that will no doubt be entertaining. I just wish we could convince him to stay on a bit longer. 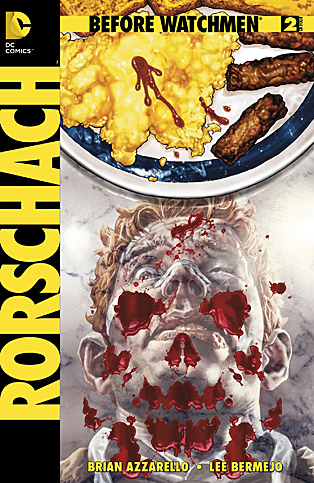 Bannen’s Book of the Week: Every fan of Watchmen knows that Walter Kovacs has certain characteristics that make him the perfect vigilante. Besides being a skilled fighter, Kovacs sees the world in black and white and has clear definitions of just and unjust. The wicked are punished and the weak are protected. Writer Brian Azzarello gets this aspect of Rorschach and displays it, with aplomb, in another stellar issue of his Before Watchmen series.

In addition to showing Kovacs as Rorschach, Azzarello attempts to add a human element to the story through a waitress who displays concern for Walter. I have mixed feelings about this addition, but what it helps elucidate is the self-imposed alienation Rorschach feels. I won’t say that readers will sympathize with the guy, but there’s definitely a weirdness to seeing someone who actually cares about Kovacs. I just hope this doesn’t become the impetus for his motivations in Watchmen.

Additionally, Azzarello writes one badass Rorschach. Walter’s resourcefulness is on full display when he tangles with gangster Rawhead’s goons. The final pages are reminiscent of the Rorschach readers know from Watchmen: rough, fearless and terrifying. His interrogation of a pimp named Joe Bird is chilling and cringeworthy. And while the final moments of the book are meant to convey a dire situation for Rorschach, the confidence he shows throughout the comic leaves little room for panic. We know he’ll survive. We just don’t know if his enemies will.

While the story is strong and well-paced, Lee Bermejo’s art sells the book. Layers of detail go into every page and panel so that you’ll find yourself taking in the minutiae of the artistry – both in the illustrations and the colors. Bermejo’s Rorschach is drawn to perfection, and he deftly uses panel construction and point of view for effect. Occasionally, Bermejo strays from the typical bordered boxes and layers images upon each other. In these creative moments, the book ratchets up the intensity, and the story takes a back seat to the art.

What I think I’ve enjoyed most about Before Watchmen: Rorschach is that Azzarello isn’t attempting to redefine the character. He understands that the character was perfectly formed before. I actually don’t even see this as connected to Watchmen at all. Instead, the comic reads like the work of a man who wandered into the coolest sandbox on the block, and now he’s having fun with the toys he found.

We just get to enjoy the results.