Kratos is cutting a bloody path through Pandora’s Temple, seeking the artifact that will grant him power enough to exact revenge on his mortal enemy, the god Ares. God of War is a fairly straight forward action game up to this point – lots of jumping and hacking and slashing, some simplistic puzzle-solving – but suddenly, the game throws a curve ball. Kratos looks up to see men imprisoned in hanging cages: one pleads for help, to be freed from his suffering.

But nope – Kratos has just gotta have that Box, and it just so happens the mechanism that unlocks the next door requires a sacrifice. So, as the player, you get to drag the caged man up a long slope – fighting off enemies the entire way, giving you plenty of time to hear the broken, terrified man constantly beg for mercy – and then, at last, pop him in a furnace to burn alive. Why? Because to wield the power of Pandora’s Box – the power of the gods- you need to demonstrate your lack of mercy. 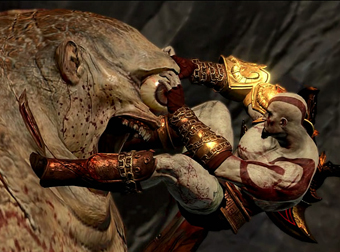 And suddenly: the game makes you think. It makes you feel. The stark brutality sinks in, and you realize that God of War has a message. It’s easy to tune out an action game’s relentless violence – but God of War didn’t want me to. It wanted me to know what kind of person my avatar was: driven, desperate, savage. It wanted me to know what I was doing was morally… ambiguous. At best. Killing hordes of mindless mythical monsters is all in good fun – but immolating a helpless man, just to open a door? That’s murder. Digital simulated murder, of course. Nobody really got hurt. But what if I enjoyed it?

God of War 2 revisited the idea, but the impact was lost, the shock dulled. By then we already knew Kratos was as much a monster as the beasts he fought against, perhaps more so. However, the need to top the atrocities of the first two titles pushed God of War 3 to an even darker place.

Playing God of War 3 put me in a state of mind that I hadn’t experienced from a videogame before. Compare Kratos’ motivations, his “quest”, between each game of the series: in the first, he fights to destroy Ares mostly out of a need for revenge – a personal motive, but justified by Ares’ evil deeds. In the second game, Kratos fights to avenge himself against Zeus’ betrayal – revenge again, but reasonable. The Sisters of Fate – his means to exact said vengeance – are portrayed as capricious and cruel, wielding their incredible power over man and god without mercy or justice. Thus, there’s a bit of righteous satisfaction in destroying them to reach Zeus – it feels like liberation, freedom from the bonds of destiny. Because of this, it’s easy to identify with Kratos’ struggle, and get absorbed into his brutal, bloody mindset.

In God of War 3 his desire for vengeance against Zeus has grown into a grim vendetta, eclipsing all else. The Titans betray him, and a new benefactor appears to support him from the Underworld. The stage is reset for another battle towards bloody satisfaction, but no longer does Kratos serve a higher calling. In his mind, it’s all about his revenge alone. Zeus must die, and damn anyone or anything that gets in the way.

Result: Kratos declares war on the entire world. As each Olympian falls, disaster after disaster is unleashed upon mankind, and ordinary people suffer. An apt correlation, because the gods of Olympus are the world for these people. To kill a god is to tear a piece of creation out of place. To achieve his revenge, Kratos does this without hesitation, and without remorse.

While playing, I was overcome by how bleak the game became. More so than ever before: by stepping into Kratos’ sandals, I became an instrument of heartless destruction, driven by a rage that once burned so hot it became only stone-cold ash. Ash-skinned, with a soul to match. Kratos’ slow, methodical march of pain and death created a dreary mood that crept under my skin, dark and gripping. I was fascinated and repulsed. The increase in brutality and gore in God of War 3–not only gratuitous, but indulgent–reinforced the tone of wanton killings motivated primarily by a tortured man’s hatred of the world.

Save for a brief liaison with Aphrodite, Kratos’ quest is relentless killing until the end. Even his protectiveness of Pandora is misguided, motivated by guilt instead of compassion. Playing the anti-hero is nothing new in video games, but normally one of two things happens: either (A) we play a meaningless “what-if” side-quest as the bad guys for a bit of shallow fun, or (B) the anti-hero is actually on a mission to do good against his will, due to a plot contrivance (see Kain in the Legacy of Kain series, for example). But to play as Kratos in God of War 3 is to stare right into the abyss.

The ending left a lingering unease to close the killing spree; mankind in ruins, and Kratos’ self-sacrifice leaves the survivors – and the player – with little consolation. “In the end, there will be only chaos.” I was left feeling the abyss had taken a good long look at me, too. After this, God of War: Ascension couldn’t hold my interest – I was too weary to return to that place. 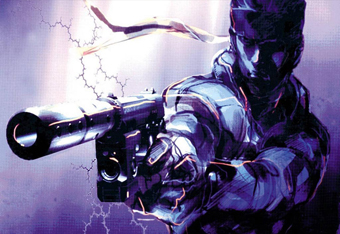 Outside of gaming, I generally abhor violence; yet there is an indisputable satisfaction in the violent destruction of a virtual enemy. Thus, I still find myself playing violent video games fairly often. Is it numbed desensitization to violent media? Can I really still tell the difference between dark fantasy and reality? It brings to mind, in contrast, another series I’ve spent a great deal of time with: Metal Gear Solid. I have no particular love for gunplay or military themes, and yet this franchise rapidly became a favorite of mine.

Why? Solid Snake – a man very familiar with killing for a cause, good and bad – proceeds through his world by stealth, sneaking around enemy guards (ideally) undetected. Metal Gear Solid, conceptually, is about nonviolence. Thrust into violent situations, your avatar fights not because he wants to, not because he likes it, but because he must to survive and accomplish his mission. The ultimate message remains: war is wrong. You can try and shoot your way through every situation, but you can also finish the game with a “perfect” zero kills. It’s harder to do than killing, but sparing lives is rewarded. Peace is the goal, not revenge. Other stealth-action games that followed still prioritize dealing death to your enemies as a way to progress, and they don’t have as much draw for me; Snake’s weariness with the folly of war resonates with me deeply.

Metal Gear Solid 2 introduced a mechanic that became a staple in later games: you can creep up behind a guard unnoticed, and take him prisoner at gunpoint. He’ll surrender, hands raised, and sometimes beg for mercy when you slip around and aim your gun at his face. You can shoot him. I never really want to, at first. I wonder if this means that my perception between game and reality has become more blurred than I realize; I’m involuntarily extending my morality into this virtual world, even though I know the guard isn’t a living, breathing person. But he seems real enough, and I can’t help but feel something. Sometimes I shoot him anyway, just to touch that dark place where a normal, well-adjusted human being isn’t supposed to go. A short brush with madness, before the game is turned off.

Maybe that darkness is part of me, always was, and the game just lets it peek out between cracks in my moral facade. Because that part did enjoy the murderous nightmare that was God of War, even if Metal Gear Solid‘s dream of peace-against-the-odds is what I choose to believe in. These games, like any other form of expression, are the products of our own imaginations. It’s clear where the abyss truly dwells.

God of War & the Lessons of an Undocumented Immigrant