I was 10 years old when I first visited Menzoberranzan, the fabled city of the dark elves. I sat on my couch and read R.A. Salvatore’s words for 12 hours straight, basking in the blazing summer sun while my mind wandered the subterranean corridors of a fictional city. Before then, my world was filled with words like “required reading” and “syllabus.” Boring words. Those words did not make me want to go and explore. Menzoberranzan, though? Menzoberranzan was different.

My parents’ philosophy of child rearing was rooted in the firm belief that there was no need for me to read at home since I was going to be reading in school. This is either some piece of divine logic, which is so firmly sound that to question it would cause a bout of Lovecraftian madness, or it is, quite possibly, the dumbest parental guidance ever.


Most stories looked like squiggles on a page to me, weird mocking lines of sheer boredom, taunting me with sleep.

When I was in grammar school, I was given textbooks filled with stories and, save for a few odd ones (anyone remember the one about the man who ate too many carrots?), none piqued my interest. Most stories looked like squiggles on a page to me, weird mocking lines of sheer boredom, taunting me with sleep and desperately making me think of anything else other than the thoughts they were trying to convey.

That kind of reaction does one thing in the American education system: it lands you right in remedial English class. There, nobody cares about the quality of ideas or the level of your insights. I can remember sitting in classrooms learning pronouns, articles and the horrifying process of sentence vivisection – it all just seemed like a waste of resources. It was a time when I felt trapped without a sense of desperation, just a gray feeling of complacency. I wouldn’t even say broken-willed, because there was never a will to begin with – just emboldened acceptance.

The first time I had some sort of resonance with a story was with R.A. Salvatore’s novels set in the Forgotten Realms of Dungeons & Dragons: The Crystal Shard, Streams of Silver, The Halfling’s Gem, The Dark Elf Trilogy. I found the intrigues of Menzoberranzan, the City of Spiders, particularly fascinating.  The entire city-state, two miles underground, was completely devoid of light, but I found illumination there.

Drizzt Do’Urden, Salvatore’s dark elf protagonist, was born into a malign matriarchy, a world of murder and cunning where males were placed in a lower caste and considered inferior to females. If a male drow didn’t perform his duties accordingly, he was cursed to become a drone-like half spider mutation called a drider. Through his own independent nature and abilities, Drizzt defied his society and became an exile, living a life of seclusion from his own people and racism from the people of the larger world. The hints of Kafka were all there. 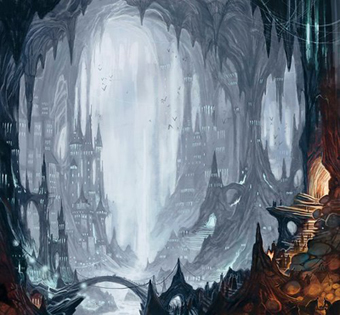 These were the books that whetted my appetite for reading. I began to inhale anything with the written word (at least as long as one of the words was scimitar). In turn, my ability to write increased with each reading, but it wasn’t until a remedial English class in my sophomore year of high school that I had to do some creative writing. I opted to visit Menzoberranzan and wrote a short story about Drizzt being trapped in a tunnel while being chased by mind flayers. I was too young or too excited to have any doubts – the possibility of getting a bad critique hadn’t even occurred to me – so I wrote and cared only for the audience of myself. Luckily, thankfully, my teacher read it and immediately requested that I be put into a higher level class.

A lot of years have passed since the day I submitted that paper. It was the start of a journey filled with other writers and classrooms and it eventually lead me to a degree in English, a turn of events filled with fiscal regrets but mental satisfaction.

A few weeks ago, I read Salvatore’s Charon’s Claw, the latest installment in his Neverwinter Saga. Over the years lots of characters have died and the face of the entire world he created is different. Even though my lenses of perception have become more refined and my understanding is deeper, there is still something that feels like an old friend in those pages. The city of Menzoberranzan may not exist in the real world, but it is still a city visited by legions of loyal readers.

They say travel broadens the mind. I have to agree.