In anticipation of the release of his new novel, Neverwinter, on this Tuesday, October 4, R.A. Salvatore sits down with Unwinnable’s own George Collazo and talks about his new book, his craft and future projects.

Unwinnable: One great element of the book is now that Drizzt is older, generational repercussions really seem to be a key. You definitely take advantage of the long lifespan of an elf and I’ll say better than any vampire book ever has. You can really see him go from point A to B in this. They say that people completely change every seven years. Working with the character for so many years, do you feel like it has been three lifetimes?

R.A. Salvatore: Yes, at least three. If you remember the book The Lone Drow, I had a specific purpose in mind for the character as I was going through. I didn’t really start out with that, but that is how it developed through the book. Whenever I sign that book for someone I will typically write, “What it is to be an elf.” In that book, Drizzt is dear friends with an elf and she explains to him that to be of the long-living races and keep your sanity, you have to be able to let go of that which you lose, because just about everybody around you is going to die. You are still going to be young, many times over.

So you have to be able to live your life episodically, like five human lives instead of one elven life and that really is the lesson for Drizzt. He is still trying to figure out if that is correct or not, so he is trying to do it. He is taking her advice, he is letting go of the past and he is hooking up with Dahlia, taking that chance and that risk and just being a little reckless.

If I look back at Drizzt, I know this wasn’t intentional from the beginning; it became more and more so as it went on. If you read The Crystal Shard, which was the first book that I wrote, there is a scene in which Drizzt and Wulfgar are going into a lair of giants. They have no business going in there, they have virtually no chance of survival and Drizzt is laughing; he doesn’t care, he is reckless. He had nothing to lose as his friends grew around him and his love grew around him, but then all of a sudden he has something to lose.

If you look at Drizzt through the middle books, he becomes much more cautious. He becomes much less willing to hang it all out there – he does when he has to but he doesn’t want to. Now he has nothing to lose again.

Unwinnable: It is interesting – he was almost still personally reckless but more protective of those around him than himself.

R.A.: In the book Starless Night, which is about halfway through the series, he actually leaves and

goes back to the Underdark to surrender to the dark elves. He is afraid that they might come back and hurt his friends and thinks that is how he can protect them, because he is really kind of stupid at times. It has been an amazing journey and as I look back, it becomes even more amazing to me the way it went – some of it was intentional and a lot of it just was organic.

Unwinnable: When I was younger, I never read anything until I picked up The Crystal Shard. That was the first novel I ever read and it started me on a lifelong course with the written word. Why do you think after all these years Drizzt still maintains such resonance with readers? 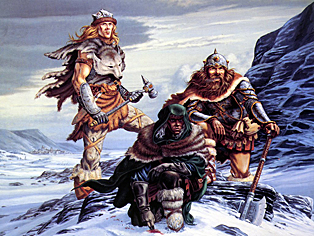 R.A.: There are a lot of reasons. One is the nostalgia for a lot of the readers who have been around for a long time. I get a lot of letters from people saying, “I never read a book until… ” Those are my favorite letters, by the way, so thank you for telling me that.

There are things in pop culture that ring very hollow to me. “Can we have the most wonderful wedding?” Who cares? I don’t care what your wedding is. Or in movies, a lot of times the hero is whoever has the biggest gun. I always thought the hero was the guy with the biggest heart and the biggest set of principles, who sticks to them even when it is tough because it is very hard to stick with your principles sometimes.

I think Drizzt has that; I think he is a throwback to the concept that being heroic and being courageous means following what you know is right in your heart. I think that is kind of a universal message.