Recently, Unwinnable’s Mike Edwards and I happened upon a new addition to Barcade Brooklyn’s arcade cabinet collection: Final Fight. For those unaware, Final Fight is Capcom’s side-scrolling beat ’em up that is far superior to the likes of Double Dragon and Bad Dudes (I’ve played both those games recently – they stink!). Anyway, we pumped the machine full of quarters and started cleaning up the mean streets of Metro City. 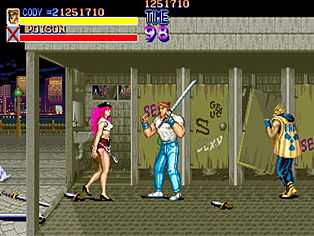 What struck me about the game were the enemies. Punk-looking gang members, colorful pimps and scantily-clad female thugs reminded me of the New York City I remember from my youth – good old New York Shitty!

Growing up in suburban New Jersey, my sister and I were fortunate enough to have parents that believed in bringing us to the greatest city in the world on a fairly regular basis. New York City was a magical land full of museums, amazing restaurants and bootleg Simpsons t-shirts. It was also scummy as hell.

One of my earliest memories of NYC is coming home from dinner at Hung Fat (R.I.P.) over on Mott Street in Chinatown. We were sitting in traffic, waiting to get into the Holland Tunnel. Since the Holland and Lincoln Tunnels were havens for traffic, the homeless of New York would congregate around the cars and start cleaning windshields. They were the squeegee men, and they were named for their filthy rags and dubious window cleaner. Mind you, this service was completely unsolicited. The man who approached my parents’ car had a very well-used rag and bottle of something that looked more like diluted diarrhea than it did Windex. He proceeded to spray the windshield and garnered the ire of my father. 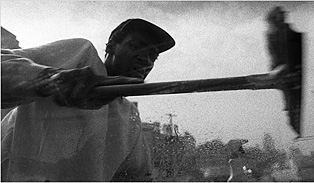 As he spread the filth over the glass, the guy kept asking my father for money.

“Just stop,” my father said as he grabbed some change from the console. The guy kept spraying and wiping. He looked like that guy who wore the skullcap on Hill Street Blues. My father gave him money and the guy moved onto the next car. The windshield was a murky, gray-brown mess. My father ran the wipers and the fluid and we could mostly see.

When I was 10, I saw Gremlins 2: The New Batch. There’s a scene were Mr. and Mrs. Futterman arrive at Billy and Kate’s apartment. Mr. Futterman hands Billy a crumpled paper bag and tells him that it was a pie from Mrs. Peltzer, but that someone on the NYC bus sat on it. The implication being that all New Yorkers were rude – a far cry from the pleasant folks in Kingston Falls.

This was an implication made in pretty much every movie about New York from the 1970s through the mid-to-late ’90s. Movies like The Warriors, Mean Streets, Maniac Cop, Friday the 13th Part VIII: Jason Takes Manhattan, Street Trash and even Superman (yes, Metropolis is a stand-in for NYC in that flick) paint New York as the kind of town that would stab you as soon as spit on you. And while that was an exaggeration, the city did earn some of that reputation. 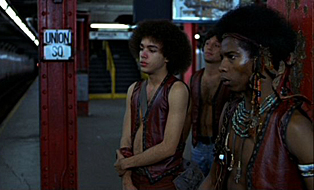 Sometime in the early ’90s, my family was once again stuck in tunnel traffic. This time, though, we were stuck at the Lincoln Tunnel. We’d spent the day at the Museum of Natural History and had a nice dinner somewhere in midtown. While sitting in traffic, I noticed several hefty women walking up to every car in line to get to the tunnel. They were barely wearing any clothes and some of them wound up getting into cars. Finally, one of the women walked up to our car:

“Hey big boy, want to take a ride?” she said to my father.

“There are children in this car!” my mother yelled at the woman.

The woman waved to us in the back.

“Gotta make a living,” she said as she moved onto the next car. 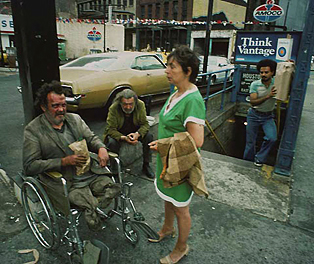 Years later, while briefly working in a telemarketing center, I had an epiphany – I was just like that prostitute! Here I was making blind phone calls, hoping to sell a gutter cleaning, when most times people would tell me to shut up or move on. But every once in a while, someone would say, “You know, my gutters are a mess.” And then I’d make some money. New York Shitty, so many years later and you were still taking me to school.

Ultimately, there was a lot of suffering in those days and that is a damn tragedy. I can sit here and make cracks about diarrhea and videogames, but I’d be remiss if I didn’t get a little real here.

Over time, New York City changed (as it always has and as it always will). It became a more family-friendly city. You can’t buy fireworks right off the street anymore. Entry to the subway is all automated, based on reusable MetroCards. Times Square isn’t the haven for drug sale and use that it once was. While overall crime in NYC went down over 33 percent from 2001-2011, the NYPD CompStat from 7/30/2012-8/5/2012 shows that rape, robbery, felony assault, burglary and grand larceny are all up. According to the Coalition for the Homeless, the number of homeless New Yorkers who slept in the municipal shelter system during fiscal year 2011 was 36 percent higher than in fiscal year 2002.

The days of New York Shitty may not be far behind.

Take a ride with Ian Gonzales and his squeegee on Twitter @IanGonzales.