Few iOS games really come to any kind of conclusive end. Mostly, they just peter out after having held your attention for a few days or weeks, slowly fading from memory as new games take their place – before they, too, peter out. This isn’t necessarily a bad thing. For a couple of dollars, I am entirely happy with games that are great for a while but no longer. Still, for a game built up from the Frankensteinian remains of every other iOS genre, it is thus surprising that EightyEight Games’ 10000000 does have a final, conclusive goal for the player to aim for. It’s right there in the title: 10000000. That’s your goal. 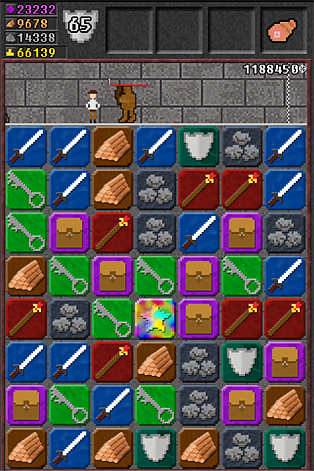 The title refers to the player’s ultimate goal, the score they are aiming for as they level up skills and weapons, but it could just as easily refer to the number of conventional genres that 10000000 fuses together. 10000000 (that’s seven zeros) is a rogue-like Canabalt-esque match-three action RPG. From his dungeon headquarters, the player’s character runs down an endless corridor fighting against the clock and evil monsters alike. In the vein of Puzzle Quest and Dungeon Raid, 10000000 has you perform typical RPG actions by lining up three of the same kind of squares on a puzzle board that takes up most of the screen. Three swords will do a physical attack; three staffs will do a magic attack; three chests might give you an item; three keys will open a padlock.

10000000, however, is not just about the puzzle board. At the top of the screen, the little adventurer runs down a side-on representation of the dungeon tunnel where monsters and locked doors block his way. Moves on the puzzle board have to be connected with what challenges the adventurer faces in the top screen in order to keep him running. A chest needs to be unlocked. A dragon needs to be killed.

Everything happens in real-time, which can lead to a frantic, frustrating search for three swords to line up as a zombie hits you again and again, inflicting a severe time penalty. At first, it is simply overwhelming. An entirely insufficient tutorial teaches you next to nothing before dumping you on the first level. But slowly, it becomes manageable. Well, not manageable, but at least you can tread water. You learn to clear the stone and wood from the board between hurdles; you understand which kind of moves are best used against which enemies; you figure out when to use your special items and scrolls.

Slowly, you get a bit further, survive for a bit longer, and the scoreboard above the adventurer’s bed back in his headquarters ticks that little bit closer to the elusive score of 10000000.
The RPG elements come into the meta-game. As you open chests, defeat monsters and remove stone and wood from the board, you collect resources and experience points. Stone and wood can be used to build new shops where your weapons and armor can be upgraded with gold, and experience points can be spent on new skills. 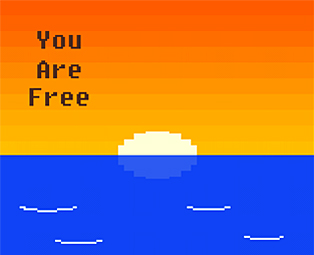 This, along with the ever-increasing score multiplier, leads to a sense of constant progression, like getting a little bit further every time you play rogue-like. More difficult monsters block progression, but grind a bit more, upgrade those weapons just a bit more, and with a bit of luck you will get to the next stage.

10000000 insists that you grind. 10000000 is a grind. As it has one of those ever-increasing score multipliers, I initially feared that 10000000 would feel like an empty experience, as do most games with score multipliers that you must grind for – what’s the point of aiming for a high score in Tiny Wings when I could get a higher one later after I do these stupid achievements? But then you realize 10000000 is not really about getting a high score at all. It’s not about doing better than your friends. Whereas Jetpack Joyride’s research laboratory is an endless limbo hell from which Barry will never escape, 10000000’s adventurer has an actual, tangible goal that he is aiming for: 10000000.

It’s an arbitrary goal if ever there was one. It’s just a number. But, really, everything in a videogame is just a number. 10000000 is enough of a goal to give a sense of progression. It’s a sense of a goal that, with a bit of luck and a dash of sweat, you might actually be able to reach out and touch.

After three weeks of playing, luck and skill and patience came together and I hit 10100000. The final door opened, and the adventurer walked out of the dungeon. “YOU ARE FREE,” the game said simply. Not just from the dungeon, but from the game. Now, 10000000 will disappear into another “Games” folder with so many other games I enjoyed for a time. But unlike those games, 10000000 didn’t just peters out. For once in an iOS game, I had a conclusion to aim for, and until I got there, I had no mind for the other 9999999 games on my phone.