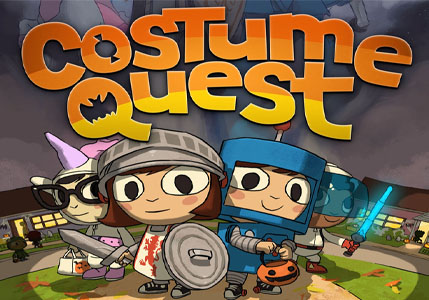 Hey, remember that Halloween when your sister got kidnapped by monsters because they thought she was a giant candy corn? And you had to go all over town trick-or-treating and collecting costumes in order to rescue her? No?

Then you really need to play Costume Quest so you can fill in the gaps in your memory.

The latest title from Tim Schafer and Double Fine Productions, available for download from the Xbox Live Arcade and PlayStation Network, is an adventure/RPG. You explore neighborhoods from an isometric view, interacting with other kids and grown-ups, finding items and collecting candy until you encounter an enemy. Then, the game shifts to a turn-based combat system reminiscent of the Final Fantasy series in which say, your cardboard robot costume magically becomes a gigantic Voltron knock-off complete with working missile launchers.

None of that is particularly earth shattering. The Penny Arcade game, On the Rain-Slick Precipice of Darkness, is cut from the exact same cloth. In fact, the turn-based combat gets a bit tiresome after the second act.

And yet, playing Costume Quest has been one of my favorite experiences in gaming this year, for reasons well beyond gameplay mechanics.

It comes down to childhood.

It seems to me that there is a body of creative work dedicated to a kind of universal childhood. Regardless of our own experiences growing up, be they sad or happy, works like Calvin and Hobbes, The Goonies or Winnie-the-Pooh or the Narnia books speak to something wistful and ideal, a childhood we may not have had but still remember profoundly.

Costume Quest sits comfortably in that company. It is a love letter to the Halloweens I should have had but didn’t – and only because candy-loving goblins don’t actually exist. Everything about the game world is ideal for trick-or-treating. Children have the run of the streets while the grown-ups stay inside, coming forth only to dole out candy. Jack-o’-lanterns are stacked everywhere and cardboard skeletons peer from the windows. Leaves are piled high, the scents of autumn are in  the air and the night never gets too dark.

This kind of adventure, with its bumbling monsters and inside out logic, is the stuff of imagination kicked into overdrive by sugary cereal, Saturday morning cartoons and idle Sunday afternoons. With that wit, charm and almost endless personality, Costume Quest conjures up a perfect Halloween night for a childhood of any age.

A Digest to Digest To – Thanksgiving 2011

The Night No One Comes Home