Sunday morning breakfast brings to mind distinct childhood memories. They pop up in my brain like Whac-A-Moles.

Whenever I smell the freshly broken yoke of a fried egg, or hear the sound of bacon sizzling and popping in a pan, I distinctly recall the gravely tone of David Brinkley dispensing the news. I remember Tom Baker offering up Jelly Babies in classic episodes of Doctor Who. And often, random B-movie flicks such as Gargoyles (1972) and Yeti: Giant of the 20th Century (1977) – popular fare of the Million Dollar Movie – rumble through my mind like lumbering freight trains. 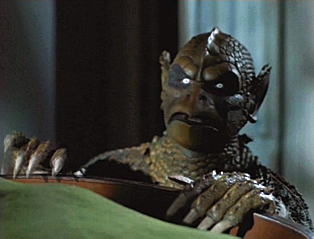 But my memories of these things are always in black and white, thanks to our TV.

My family’s 13-inch set, replete with rabbit ears and dials, was a regular fixture beside our dining table. Often it was behind me, to my constant frustration, sitting on a wheeled cart in the doorway into the kitchen.

Breakfast and dinner, the television would be on. It often felt like another sibling.

The set eventually found its way into the dining room, no longer exiled to the kitchen. It sat on book shelves, which rested below the windows that looked out of our sixth-floor apartment in Queens.

It was during that time I would watch Doctor Who. I also witnessed the final moments of Farrah Fawcett in her Emmy Award-winning role in 1984’s The Burning Bed.

That same year, however, the roaming television was once again sent off to reside solely in the kitchen. We eventually got a slightly larger color television, which resided on my father’s desk, and provided hours of entertainment through the presidential elections of that year, along with Caravan of Courage: An Ewok Adventure.

Alone the black-and-white television sat, no longer a center point of our daily lives but still used when my mother made dinner.

Then came the year we moved to Pennsylvania. The television became a permanent resident in our kitchen, seated on the counter next to the refrigerator. 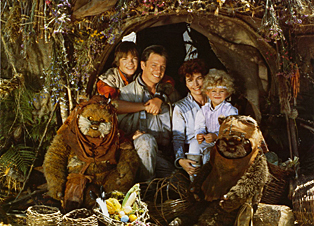 For years I used that tiny set to watch programs, often catching an episode of Doogie Howser, M.D. or America’s Funniest Home Videos (you know, back when Bob Saget was the man with the canned jokes and everything was on VHS).

Throughout my high school years, I would watch the morning news broadcast on Channel 6. I grew attached to one particular attractive, dark-skinned 6 a.m. anchor at the time, who I later met in a weird coincidence at my high school (unfortunately, I cannot remember her name and have had little luck finding her online).

By the time I graduated and was heading back to New York City, the television had broadcast its final program. The power knob broke, worn and fractured from years of pulling and pushing. The dials, too, had worn down. The handful of numbers were barely visible, the plastic only barely gripping the metal post.

Twenty years later, the contrasting shades of gray on that small television remain vivid in my memory. They shaped the way I viewed the world, in ways that are hard for younger generations to understand today, when iPhones and computers display sharp, vibrant colors with a clarity that I and others of my generation couldn’t have imagined when we were younger.

But I wouldn’t have had it any other way.